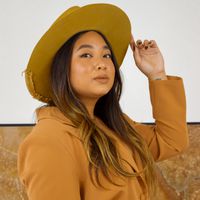 Kristin is a contributing writer for Byrdie where she specializes in product reviews.

Over the last year, the conversation about Asian American representation and proper portrayal has become more nuanced and widespread. The #StopAAPIHate movement has gathered steam and the Asian American experience can no longer get swept under the rug. And though there is a lot that still needs to be done, there is also a lot to be celebrated. In honor of AAPI Heritage Month, we're taking a look at some of important, awe-inspiring beauty looks from modern-day Asian American icons.

Awkwafina went all-out in 2019. Her stand-out golden-glittery eyeshadow was swept up through her brows and adorned with dozens of Swarovski crystals from inner-corner to crease. There was classic glamour and a whole lot of modern glitz.

Chrissy Teigen is known for glowing skin and bended waves, but this red carpet look was a full-on tangerine dream. Think: a sorbet-colored Yanina Couture dress, coral blush, and a bronze smoky eye.

Gemma Chan seemed to float down this red carpet as heads turned and jaws dropped. She wore a bejeweled pin (it said "love") in her textured, low chignon with petal-pink lipstick and shadow to match. It was absolutely etherial.

The Crazy Rich Asians premiere was a memorable red carpet, with one standout look in particular. Constance Lau's gave us blinging glow, with a berry red lip, and a structural topknot. Fastened with a dramatic twist (and faux bangs), this hair will go down in red carpet history.

Patrick Starrr one of the most beloved beauty gurus on YouTube—he headed up MAC's largest-ever male-fronted global campaign (with five consecutive collaboration campaigns between 2017 and 2018). Watching a plus-size, first-generation Filipino-American man front a massive campaign for one of the largest makeup brands in the world was simply iconic.

Priyanka Chopra is something of a beauty chameleon when it comes to her red carpet appearances and magazine covers. Though her staples usually include a berry lipstick and blush, she's not afraid of a vamp lips or dramatic eyes. Here, her white eyeliner, Swarovski crystal beauty marks, and curls left us speechless.

Bretman Rock is no stranger to the collaboration, but his collection with Wet n Wild was especially significant. It marked the brand's first-ever collaboration collection with anyone—celebs and influencers alike—and Rock specifically created products to embrace and celebrate his Filipino heritage and Hawaiian roots. The end result? Glowy, vibrant shades at a drugstore price point.

Ian Alexander got our attention with this deep red graphic shadow and sharp brow look at The OA Part II premiere. He believes makeup and jewelry are genderless (we couldn't agree more), so we love watching that sentiment play out with a killer beauty look (and jewelry to match).

Michelle Phan is the original beauty influencer, and she has definitely created memorable looks over the years. One tutorial that stands out was one of her earliest: a 2008 tutorial on how to achieve a smoky eye. This look wasn't iconic because it was daring, but rather because watching an Asian woman do an eye look (especially one as ubiquitous as the smoky eye) was helpful and empowering.

Regardless of our feelings on the show now, the Victoria's Secret Fashion Show was a huge, globally-recognized stepping stone for models in the industry for decades. As such, watching Kelsey Merritt, the first-ever Filipino model to walk in the show, move down the runway was nothing short of magical.

As a mixed woman, Jhene always honors her heritage through her red carpet looks. Here, she wears protective box braids, lilac liner below her lower lash-line, and wispy false lashes.

Nabela Noor said it best when she announced the launch of her campaign with e.l.f.: "A Bangladeshi-American, plus sized, Muslim girl has her very own makeup collection with @elfcosmetics. A collection celebrating her South Asian heritage and individual beauty." This collection celebrated Noor's consistent message of self-love above all else and honored her heritage the whole way through (the packaging even had henna-inspired designs on it).

Kim Chi, a Korean American drag queen named after traditional pickled cabbage, has had a massive impact on modern popular culture—as well as the beauty industry. Now regarded as Drag Race royalty, Kim Chi delivered look after look, week after week on Drag Race in a way that highlighted heritage and challenged fans' preconceived notions of what drag is "supposed to look like."

A tight top knot, bronze smoky eye, and deep vampy lip is everything we needed and more.

We're used to seeing Mindy Kaling serve her beautiful dark brunette hair on the red carpet, but she surprised us all when she arrived as an icy-platinum blonde. We haven't been the same since.

A Deep Dive Into the Appropriation and Whitewashing of Asian Beauty