"I Lost My Job During a Pandemic": A Bartender on Making the Best of a Very Bad Situation 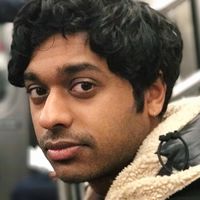 Trevor Vaz
Trevor graduated with a Creative Writing degree from Columbia University and has been contributing to Byrdie since 2020. Trevor has written about mental health, music, food, and nightlife for various publications including Byrdie and Popular Science.
Byrdie's Editorial Guidelines


March 12, 2020 started out as a fairly normal day for me. I spent the afternoon in a coffee shop writing emails, anticipating my bartending shift later that night at an event space in Chinatown. I was writing a mass email promoting a show my band had booked as I overheard people talking about cancelled flights. I’d been obsessing over the Democratic primaries and felt like I didn’t have the mental capacity to be anxious about Coronavirus simultaneously, so I’d kept my head somewhat in the sand about it. Having happily skipped the news that morning, I finally pulled it up to read about Trump’s European travel ban. It looked like the volume on this whole thing had really turned up. I ought to be sensitive promoting a show at this time, I thought. I added a line to my email:

"I recognize it's a complicated (though in many ways appropriate) time for a punk show. I'm sensitive regarding the virus and the fear it's causing, but this is still on as of now. If you feel cooped up and want to party, we'll be doing our thing. I respect you doing yours."

In my defense, this was supposed to be a benefit show for a non-profit that provides support to previously incarcerated people. I was trying to be socially conscious. Anyway, I hit send on my now cringe-y email and walked over to the event I was working, feeling alright.

Soon enough, texts started rolling in. One friend said they couldn’t make it because they’re living with their father and had to take precautions. My bandmate texted saying he was thinking of flying home to be with his family. A friend who’s a nurse flat out told me I should cancel the show. I had grossly misjudged the gravity of the situation.

There are undocumented, unhoused, and imprisoned people that have far less flexibility than I do during this outbreak.

The event I bartended that night was eerie. There was a big bottle of hand sanitizer on the dinner table surrounded by expensive gourmet food. People ordered their fancy cocktails with no garnish, afraid of my hands touching their lime wedge or orange peel. I heard not one conversation that wasn’t about COVID-19. Once the night was over, I stole the bottle of hand sanitizer, went home, and cancelled all five of my upcoming shows. I realized it was irresponsible to be gathering even healthy and willing people during this time, especially to the elderly and physically vulnerable.

Still, I had to bartend the next two nights. My other job was at a bar in Brooklyn, and NYC hadn’t yet hit the point at which all bars were shutting their doors. My boss at the bar was being conscientious, feeling nervous about staying open but even more so about closing. He made fancy homemade hand sanitizer and put little spray bottles all over the bar. We opened up the roof deck in cold weather so there would be more space for people to socially distance. My co-workers and I wore black latex gloves and pretended like everything was business as usual. It was a slower weekend than most, but people still came out to drink. The next morning, I woke up to an email telling our entire bar staff we were being laid off. The owners told us they plan to rehire us once the pandemic blows over, though it’s unclear whether the business will be able to survive for months without income. They urged us to seek unemployment benefits right away, since the usual seven-day waiting period had been waived.

Once this quarantine passes, we will emerge to a world that’s been forever changed. The status quo already has a visible crack in it.

It took me a total of ten hours over five days to successfully apply for unemployment. The site kept crashing when I was nearly finished. My calls kept dropping at the moment I was told I’d be connected to a representative. It was infuriating and disheartening and made it painfully clear to me I wasn’t alone. I was one of thousands of workers in NYC alone that had been suddenly laid off. After trying all combinations of options on the unemployment office’s automated phone menu, I found myself on hold for 30 minutes. Just before I gave up, a lovely man named Bob appeared on the other line. Thank you, Bob. He said his job was usually to help reset people’s PIN numbers but he’d be happy to upload my application to the system.

I’m one of the lucky ones. It’s been more than a week since we got laid off and I still have ex-coworkers that haven’t been able to get their applications through. I know older folks that aren’t so tech savvy and have spent full days calling the unemployment office over and over again, only to be hung up on. I’m also lucky in that the days since the quarantine started, many of my friends who are working from home and still financially stable reached out asking if I’m alright on money. I’m thankful to have kind and generous people in my life and am well aware not everyone does. I told them unemployment should start coming in soon. I still do some freelance writing (like this, for example) on the side. I should be cool for now.

So I lost my job. I don’t have health insurance in the middle of a pandemic. I don’t know at all what the future holds for me, but to be real, instability and uncertainty are inextricable from my life as a bartender and musician. I don’t say that seeking sympathy. It's the life I chose within a system that doesn’t reward such choices. There are undocumented, unhoused, and imprisoned people that have far less flexibility than I do during this outbreak. My stress is more universal than personal. On a personal level, I feel calm and slightly guilty about it. I struggle with depression and anxiety, but my therapist told me (over the phone) that I sound better than I have in weeks. I tried to defend myself saying stress is bad for my immune system. I know the “quarantine album” has somehow already become a trope, but I’ve been writing and recording music without distraction. I’ve been exercising most days. I’ve been cooking all my meals. As a socially anxious bartender, I don’t have to interact with hundreds of strangers over the course of a night. Needless to say, I’ve been drinking less. One thing I’ve noticed is my dreams have been extremely vivid, maybe because my reality has been so one-dimensional and repetitive. After week one, this feels like a vacation from capitalism with a terrifying dystopian edge.

Just because I’m isolated physically doesn’t mean I have to isolate mentally.

I figure there’s nothing wrong with making the best of a very bad situation, but at the start of week two, it’s dawning on me this quarantine will be my life for many weeks or even months to come. Just because I’m isolated physically doesn’t mean I have to isolate mentally. In some ways this outbreak is proving to be a worldwide test of human kindness (I’m looking at you landlords and lawmakers), and there are an enormous number of people in need. Once this quarantine passes, we will emerge to a world that’s been forever changed. The status quo already has a visible crack in it. It’s up to us to see this as an opportunity to push for social progress that supports and lifts up the people that get left behind in a crisis like this. It will be on us who have privilege and shelter and baseline resources to organize and advocate for those that do not. In the meantime, here are some organizations that are doing important work and could use a hand…

Trevor Vaz is a musician and bartender living in Brooklyn. He sings and plays guitar in the bands Bodycam and Dances. Listen to him here.