Eden Stuart is an associate editor at Byrdie. She covers all beauty and wellness topics, with a special emphasis on makeup, skincare, and haircare.

Following up a smash-hit with a worthy second act is no easy feat—both in the beauty industry and beyond. In an effort to avoid the dreaded sophomore slump, it can be tempting to run in the entirely opposite direction; think musicians that throw away their guitars for synths, or filmmakers that go from intimate indies to big-budget blockbusters. But oftentimes, it’s best to take a hybrid approach. Stick to the core of what made you such a success in the first place, while also letting it be known that you’re moving forward and evolving.

This is the approach Hyper Skin took when launching its second product after debuting two years ago with the Hyper Even Brightening Dark Spot Vitamin C Serum ($36), a powerful formula that instantly became a bestseller and a perennial favorite amongst Team Byrdie. “The goal was always to be focused on under-addressed problems for skin color,” says founder and CEO Desiree Verdejo of the Hyper Skin ethos. “We started with our serum, and we wanted to continue to focus on hyperpigmentation, a core underlying concern.”

The brand is officially continuing its mission today (Feb. 15) with the launch of the Hyper Even Fade and Glow AHA Mask ($48). The new mask—which features alpha hydroxy acids that promote cellular turnover, thereby fading dark spots—also includes ingredients to help clear the pores and repair the skin barrier. “It will fade dark spots, but it will also calm some of those drivers like acne and razor bumps," says Verdejo. Consider it the best of both worlds.

Ahead, learn more about the new Hyper Even Fade and Glow AHA Mask, and read my honest review.

For Verdejo, the key to creating standout products that target hyperpigmentation is looking beyond the most commonly used ingredients. “There just seemed to be no advancement in ingredients that worked for this issue," she explains. Plus, she found that many of the most effective formulas on the market come with strings attached.

"One of the things that I've been excited about is to explore formulas that do work effectively [but] don't need to be used within a limited time frame and under the guidance of a dermatologist,” says Verdejo. The solution was (hyper) clear: the brand's second-ever product would be a powerful at-home face mask that worked in conjunction with the existing vitamin C serum to fade dark spots and leave behind clear, radiant skin. All the brand had to do next was find the perfect combination of ingredients.

One ingredient in particular takes center stage in the Fade and Glow mask formula: mandelic acid. Verdejo discovered the powers of the exfoliator while treating her post-pregnancy skin. “This is my favorite ingredient that really helps to manage things like breakouts, razor bumps, and other very common concerns for skin of color," she explains. And of course, the key ingredient also treats hyperpigmentation as well. “Many studies have shown it works well on skin of color because it is more gentle; it’s less likely to hyperpigment your skin when misused.”

The ingredient’s anti-inflammatory properties, however, were the major draw. “I’m prone to congested skin and a bumpy forehead, and I know our customer base is dealing with issues like razor bumps,” says Verdejo. “So the anti-inflammatory nature of [mandelic acid] is what I’m really excited about.”

Alongside mandelic acid, the formula features niacinamide and sea buckthorn oil (“really great, core clearing ingredients,” says Verdejo) as well as salicylic acid, glycolic acid, and fruit enzymes that join mandelic acid in exfoliation. “The ingredients work together to brighten the skin, clear the pores, calm inflammation, and to work against hyperpigmentation,” she says. 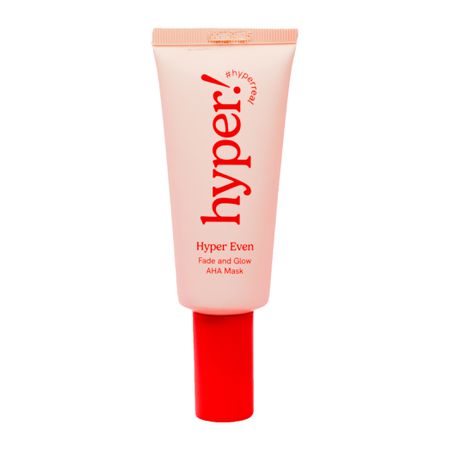 When it comes to application, Verdejo says to apply the mask to clean skin for 10 to 15 minutes (“You might [want] to use it for 10 minutes the first time,” she says). There will likely be a tingle due to the exfoliating ingredients, “but it shouldn’t burn.” After your 10 to 15 minutes are up, just rinse off and follow with your moisturizer of choice. “I advise using it about twice a week,” says Verdejo. “You might work your way up to three times a week, but twice a week is usually a sweet spot.”

First up, a little skin context: I would say my skin is combination. I’m also not sensitive at all, and I fairly regularly use at-home AHA/BHA peels that others deem harsh. But hey: If there’s a way to get peel-like results with a lower risk for irritation, I’ll take it.

On to application. After washing my face and patting/air drying, I took this mask for a spin. One of my first observations: I have mixed feelings about the packaging. The mask comes in a tube, with an airless pump that’s similar to the sorts you find on foundation bottles. This is great from a storage standpoint, since airless pumps are less likely to lead to bacterial contamination than jars. But from a usage standpoint, I kind of found it a bit tricky to get the product out at times. My best advice would be to keep the tube right side up at all times (so not on its side or anything); that seemed to be most effective way to consistently get the mask out without a million pumps.

One thing I feel confident in asserting is that this mask does not burn. Again, I’m not particularly sensitive, but during the 20 minutes I wore this mask, I was honestly shocked at how much I didn’t feel it—apart from the texture, which was pretty light. I wore the mask for about 18 minutes before washing and following with a moisturizer. For those concerned, I didn’t detect any particular smell to the product, nor did I see any fragrance listed on the ingredients list.

I can’t say I saw any immediate results–my skin is currently in a bit of a rut, and it appeared to still be firmly stuck in that rut when I woke up. But nowhere does the product claim to work overnight, and if there’s one thing I’ve learned as someone who has dealt with some degree of post-inflammatory hyperpigmentation almost her entire life, it’s that even though you can get the scars overnight, it’ll always take much longer to rid yourself of them. And I’m excited to keep using the Hyper Even Fade and Glow AHA Mask on the journey.

The Best Dark Spot Correctors That Actually Work
Article Sources
Byrdie takes every opportunity to use high-quality sources, including peer-reviewed studies, to support the facts within our articles. Read our editorial guidelines to learn more about how we keep our content accurate, reliable and trustworthy.