How To Wear a Beret Without Feeling Cheesy

It dates back to 19th century. 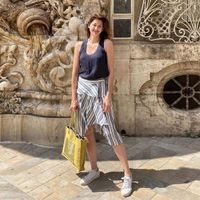 Kasia Dietz
Kasia is a freelance writer and designer in Paris. She has contributed to CN Traveller, Architectural Digest, BBC Travel, and more.
Byrdie's Editorial Guidelines

Berets in Politics and Pop Culture How to Wear a Beret

Who wore it better, the artists or the revolutionaries? It was the Dutch artist Rembrandt who first donned the beret, one of France's most iconic accessories. While he was known to have sported a black velvet beret, as many of his self-portraits reveal, it was the working class, both artists and farmers, who favored this utilitarian accessory.

The French word “beret," dating back to 1825, originates from the Latin word "birretum" and the term "bearnais berret" describing a flat cap worn by the working class. How did the beret progress from sitting atop the heads of Europe’s artists and farmers to becoming a wardrobe staple for the bohemian chic? First, it became a political statement.

Berets in Politics and Pop Culture

Rewind to the 19th century when Spanish leader of the Carlists, Tomás de Zumalacárregui, led his revolutionaries while wearing a red beret, which his followers quickly adopted. In France, the beret color of choice for the Chasseurs Alpins was light blue, signifying their elite status with the French Army. While colorful berets found their use as military headgear, black berets were then only worn by peasants.

It wasn’t until the 20th century that the beret became a fashion statement, thanks in part to Coco Chanel who sported this predominantly male accessory with grace and elegance. Chanel often ornamented her beret with a broach and complimented the look with strings of pearls. Adding a more bohemian twist were writers and singers including Ernest Hemingway and Edith Piaf who donned the beret in both casual and formal garb along Paris’s right and left banks. Artist Pablo Picasso was often seen wearing a beret and even painted a piece titled "Femme au Béret et à la Robe Quadrillée (Marie-Thérèse Walter)" depicting a woman in a red beret.

Soon to adopt this sophisticated look were movie stars the likes of Greta Garbo, Brigitte Bardot, Marlene Dietrich, and Lauren Bacall. Each actress adopted the beret to her own signature style, both on and off-screen. Once the beret hit Hollywood, it formed its own star status. In more recent years, Dior and Gucci reconfirmed the beret’s high fashion appeal by adding it to their runway shows.

Meanwhile, the political significance of the beret continued even after this versatile hat made its way onto the heads of famed intellectuals and luminaries. Members of the Black Panthers wore these iconic hats as a sign of revolution. Decades later, the symbol of the beret remains one of Black power, donning the heads of activists and celebrities standing up for racial equality and the lives on those in the Black community.

How to Wear a Beret

The rules of wear are simple. Below, find a few tips.

What makes the beret an ideal accessory, regardless of how à la mode you consider yourself to be, is that it suits every style. Whether you’re bundled up for winter, leisurely cycling through the countryside, or strolling around the city in a flowy dress and a light sweater, a beret can be worn from the fall to the spring. A classic Parisian look that’s easy to dress up or down includes pairing a beret with a trench coat and a pair of jeans, sneakers, or heels depending on the mood. Contrary to French clichés, there’s no need to carry a baguette and don a marinière or striped shirt (though you can if you want to).

These days, berets come in a variety of fabrics, from Eugenia Kim’s black leather beret, to colorful wool options by Kangol, to sexy versions by NYC-based brand Glazed. Select luxury brands, including Dior’s blue denim beret puts a modern twist on the style, while French-made berets from Beret Français are as classic as they come. Handmade in a workshop in Bayonne, Beret Français offers a wide selection for women, men, and children, including a tweed beret and a more modern black beret with rivets.