How to Talk to Your Family and Friends About Racism, According to Experts 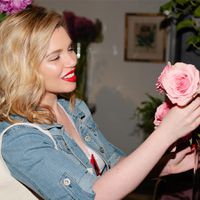 Loni Venti
Loni is a writer and beauty editor specializing in beauty, fitness, and fashion. She has written content for national print publications and websites for over 13 years.
Byrdie's Editorial Guidelines

Try Calling In Versus Calling Out Have a Discussion, Not a Debate Be Vulnerable
Try to Keep Your Cool Customize Your Conversation It's a Marathon, Not a Sprint

As the movement for justice and equality for the Black community continues, many white people and non-Black POC are learning harsh truths about how they contribute to the problem. How not being outwardly and egregiously racist doesn't dismiss the ways in which they've inflicted pain and bias. “Structural racism has continued to flourish, in part, because of white people's unwillingness to have difficult conversations about race,” explains JLove Calderón, co-founder of Inspire Justice and author of Occupying Privilege: Conversations on Love, Race and Liberation. And one of the most important places to have these difficult conversations is at home.

But before you start (or continue) angrily responding to every problematic comment posted by a family member or made at the dinner table, experts suggest there is a more productive approach. “Meaningful change can’t happen without giving meaningful feedback,” says Shawna Marie Aarons-Cooke, psychotherapist atHealing Truth Center in New Rochelle, NY. And meaningful is the key word. Here, pros share advice on how to effectively speak to even your most stubborn family members about racism.

Try Calling In Versus Calling Out

“When it is someone you know, a helpful tool is to 'call in' people as opposed to calling them out,” says Calderón. Calling someone out is when you blast them publicly. It is usually met with a defensive response and the need to be right. “It pushes people further away,” she explains. Calling someone in invites them to have a conversation with you one on one. “It’s a way to open up a dialogue about important issues (such as race and racism) that might allow for someone to be open to another perspective and choose to change their mind.” Aarons-Cooke agrees. “Many of the conversations we need to have are not happening yet because so much focus is on reacting to the news and posting to social media (which is good)—but it's not everything, it's not engaging.” Instead of firing away on your keyboard, she suggests a phone call. “Talk to them personally. Connect.”

Have a Discussion, Not a Debate

“Conversations are effective when both parties are open, engaged, and ready to listen. Not when either are in confrontation mode and definitely not in point-making mode,” says Aarons-Cooke. “Make sure you’re listening. Ask questions. A productive conversation goes two ways with short back and forth dialogue. Remember: This is not a legal defense. You are not on a debate team,” she says.

This approach is also helpful when you choose to engage virtually. Dr. Shindale Seale, founder ofSEADE Coaching & Consulting, suggests skipping heated back-and-forth comment wars. “Usually when people post racist comments, they’re looking for attention. They want co-signers or a combatant,” Seale explains. “I personally respond with a point-by-point explanation of why I disagree with their post and then I end communication. I see it as I’ve presented my thoughts. The racist comment appeared and I made it clear that I don’t approve of that message. I said what I said and that’s it.”

A little humility can go a long way. Since many of us are learning about these issues in a new light, it’s helpful to be honest about having experienced a learning curve. “Tell stories about how you came to your realization and newfound perspective,” suggests Seale. “Admit that it’s a tough transition but it’s been helpful for you.” And kindness goes a long way too. “I don’t think anyone changes their mind because someone tore them a new one,” adds Aarons-Cooke. One simple way to start a conversation, with humility and vulnerability, is to share a video or article that opened your eyes to something new about racism, and explain how it shifted your way of thinking.

Another approach that leverages vulnerability: Explaining why this is important to you. And, why it makes sense that it be important to them. “Bring up what's happening and share that you care deeply about it,” Calderón suggests. “Ask your family and friends to be open to hearing your perspective.”

Try to Keep Your Cool

You should feel very passionate about this movement, but aiming to keep your discussions respectful and grounded will make them more successful. “It is counterproductive to approach this topic as an interrogation or direct attack. Choosing to bring it up makes you responsible for facilitating properly. Don’t let emotions get in the way of conveying the message you intend,” explains Seale. “Know that you might be challenged for your perspective. Let love and compassion for your family members guide you.”

Something that might help you stay calm is empathizing with your family member. Accepting the reality of a racist society (and taking accountability for their racist tendencies) might shake up their whole world. “It could mean they would have to cut ties with friends or leave organizations. Their support system could be upended,” says Seale. “Their world as they know it would be forever changed and their identity would now need to be reconstructed. It is a process.” Realizing that this might be a big ask of someone, especially someone you love and care about, may inspire you to approach this more gently.

Talking to your grandmother, your uncle, and your niece will always require different tones. So of course you’ll need to tailor a discussion about racism to whoever you’re addressing too. “Changed behavior happens through repeated feedback that is appropriate for the person including their age and your relationship,” explains Aarons-Cooke. “For example, if your grandmother says something with racist undertones every time you meet, and you respectfully comment on it each time in a way that aligns with your usual discussions with her, eventually you will make her think twice about saying racist things.”

Consider how you may have gotten through to this family member before. “Think about the person’s values. Think about how you’ve approached other topics in the past that your family wasn’t open to. Think about the ones that went well. How did you approach them?,” says Seale. “Go with what works. Your relationship with them is key and must be leveraged.”

It's a Marathon, Not a Sprint

Don’t expect someone to ditch a lifetime’s worth of beliefs in one conversation. “For most of their lives, white people have been taught that "being racist" is equivalent to being in the KKK, burning crosses, lynching, and the like. Which would make you a very bad person. And they don’t want to be a bad person,” Seale explains. “These ideas are taught and embedded throughout society for one’s entire life. To hear that things are not as you were taught they were, shakes your foundation,” Seale explains. Remind them that systemic racism and benefiting from white supremacy is not their fault, but it is their responsibility. It doesn't mean they're automatically a bad person. While the goal of these discussions is to challenge the way many people have been thinking, approaching this without mindfulness of the unlearning process can result in backlash.

“You don’t have to say everything at once. You can plant seeds,” says Aarons-Cooke. “It’s not realistic to have one conversation with someone with mild, medium, or extreme racist ideologies and change their mind.” She recommends setting smaller, more attainable goals and building from there. “A more achievable intention would be to help them understand why you’re so passionate about racial injustice. Start there, and keep going.”

And most importantly: Don’t give up.

6 Black Beauty Founders on What Allyship Means to Them