Here's The Real Reason You Can't Stop Picking Your Skin 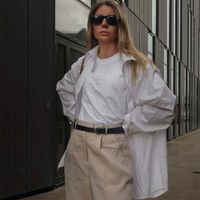 Jessica Harris
Jessica is a freelance fashion and beauty writer based in the UK. She has contributed to Look, Tatler, Brides, Glamour, Marie Claire, and more.
Byrdie's Editorial Guidelines
Medically reviewed by
Onyeka Obioha, MD

Medically reviewed by Onyeka Obioha, MD
Dr. Obioha is an LA-based board certified dermatologist and fellow of the American Academy of Dermatology, as well as a member of the Skin of Color Society.
ABOUT BYRDIE'S BEAUTY & WELLNESS BOARD
BOARD-CERTIFIED DERMATOLOGIST
Fact checked by
Anna Harris
Fact checked by Anna Harris
Anna Harris is an experienced fact-checker and researcher and a beauty writer and editor.
LEARN ABOUT BYRDIE'S EDITORIAL GUIDELINES

What Is It? What Causes It?
What's the Damage? What's the Treatment?

We've all been there—when you feel that first tingle of a pimple rearing its head and all you want to do is touch it, prod it, and squeeze it. Before we know it, that magnified mirror becomes our best friend and worst enemy as we dig away at anything in plain sight. But when does an innocent pick turn into an all-out obsession? Keep scrolling to find out the truth about skin picking, according to experts.

According to the American Journal of Psychiatry, roughly 2-5% of the population pick their skin, and it primarily affects women. But, we're not talking about a sneaky pimple pop in the ladies room. dermatillomania (its official medical term) is a condition grouped under the OCD (obsessive compulsive disorder) umbrella and can cause noticeable tissue damage. “It usually starts on the face, but it can be carried out on any part of the body,” explains dermatologist Dr. Jane Leonard. “Individuals affected by compulsive skin picking may start by rubbing a normal blemish, freckles or mole, pre-existing existing scabs, sores or even more cystic spots like acne.”

While most of us can confess to picking at a bit of dry skin or stubborn blackhead in the past, there's a more sinister driving force behind the condition that affects almost one in 20 of us. “Dermatillomania is a mental health issue related to a form of psychosis,” says dermatologist and founder of Goldfaden MD Skincare, Dr. Gary Goldfaden. “Bouts of intense emotions or over-stimulation such as stress, feeling out of control and also extreme happiness or excitement can magnify or even kick-start the problem.”

From thinning hair to spot breakouts, stress is often considered the culprit for a plethora of beauty and health woes. But, the correlation between our emotions and our complexion has sparked many debates in the industry. “A lot of times when someone has a skin condition, it's the condition we treat and not the person,” explains psychologist Dr. Lina Papadopoulos in her TEDx talk, Psychodermatology: More than Skin Deep. “Nerve endings in the skin are in constant contact with the brain; this, along with the nervous system influences the skin's immune cells through skin receptors and act as chemical messengers. Stress can interfere with this and the immune system affecting the skin's capacity to heal and disrupt the permeable barrier, which keeps out harmful substances and lead to widespread scarring.”

Unless you have some seriously strong willpower, digging out a bumpy blemish can be one of life's most satisfying (and, let's face it, gross) habits. But, knowing when to quit could be the difference between a temporary imperfection and a life-long lesion. “Excessive picking can lead to a trauma of the skin which could result in infection and permanent scarring,” Leonard tells us.

Touching our face is often deemed the cardinal sin of skincare. This is because not only does it pass bacteria from our hands to our skin, but it could also lead to “hypo-pigmentation, hyperpigmentation and damage to the hair follicles (if you pick the skin on your head),” Goldfaden says. “This can cause permanent scarring to the follicles, and the hair may not grow back. Although our skin is constantly repairing itself as cells turn over and new ones get created, excessive scarring leads to the production of melanin and then eventually dark spots, scarring, and the aforementioned hyperpigmentation.”

Healing lotions and soothing potions aside, experts believe that the key to kicking the habit is treating the cause, not the symptom. “A lot of the time when someone has a skin condition, it's the condition that's treated not the person,” says Papadopoulos. “We're missing a beat if we believe that the way we think doesn't impact the way we feel.”

Similarly to trichotillomania (compulsive hair-pulling), hypnotherapy, reflexology, and meditation have all been proposed in the quest to manage the condition. But recognizing the triggers is the first step to getting a handle on dermatillomania: “Focusing on stress relief, relaxation, and mindfulness is a good place to start,” says Leonard. “CBT (cognitive behavioral therapy) can be particularly useful if the skin picking is carried out as a conditioned response to a specific situation or event. The triggers that lead to the skin picking are often not known by the individual and CBT helps to raise awareness of what these triggers could be.”

Next up: How I conquered my skin picking habit, once and for all.