How I Semi-Permanently Removed My Under-Eye Bags

Victoria Hoff
Victoria channeled her editorial skills into a career in content marketing and brand strategy. She is a former wellness editor for Byrdie and held beauty and wellness editorial positions at ELLE, The/Thirty, and more.
Byrdie's Editorial Guidelines
Medically reviewed by
Rachel Nazarian, MD, FAAD

“Have you had work done?” my mom asked a little too casually during a visit last summer. “Your lips, right? Or Botox?”

“No!” I said, shocked—I’ve always personally thought injectables and plastic surgery of any kind are just not for me, and she knew that. But indignity gave way to glee as I realized that my newfound dermarolling habit to get rid of my under-eye bags had hit a new stage of success.

I had purchased a dermaroller on Amazon a few months earlier, after getting a microneedling treatment at a dermatologist’s office and watching my might-as-well-be-tattooed dark circles and puffy under-eye bags disappear—and stay gone in the weeks that followed. I seriously doubted that I would get anything approaching similar results at home, but if nothing else, pressing tiny needles into my face seemed like a pretty badass thing to try, a funny story to tell either way. I’ve never been happier to be so wrong.

Keep scrolling to read more about these miracle-working needles and how they work, according to skincare experts.

I asked that very question of celebrity facialist and dermarolling proponent Kerry Benjamin after it occurred to me that I wasn’t satisfied with my explanation of, “Uh, I think it boosts your collagen by making tiny micro-injuries in the skin.” I wasn’t wrong, but it was so unbelievably simple that even after months of putting it into practice, I was still half-convinced that there was dark magic involved. Not quite.

A derma-roller is the at-home version of microneedling, an in-office cosmetic procedure that uses tiny needles to puncture the very first layer of skin. It works to rejuvenate skin by boosting collagen production. Some microneedling devices are in pen form (wherein the needles are stamped rather than rolled into your skin) and often involve highly skilled experts. In both cases, skin is undergoing trauma via mini-needles, the most noticeable difference is whether those needles are being angled into your skin or not.

As Somenek explains, even though you can purchase and use them at home, dermarollers are pretty great in terms of reducing bags and puffiness. "Jade rollers are another excellent tool you can use at home for under-eye bags," he says.

Benefits of Dermarolling for Under-Eye Bags

“The skin around your eyes is very thin and delicate,” Benjamin explained as she pressed a roller into my face. “When you see dark circles, you’re just seeing the blood pool around your eyes through the skin. By making those tiny injuries in the skin, you’re putting collagen production into overdrive and thickening that skin.” Doing so makes the blood much less visible and fills in those under-eye bags and lines, too.

So how does a dermaroller work so well? "They stimulate the lymphatic system and massage the face to get rid of puffiness, toxins, stimulate blood flow, and reduce muscle tension," says Somenek.

For me, the most remarkable aspect with microneedling is that while these very noticeable results are certainly advertised at the cosmetic dermatologist’s office after hundreds of dollars worth of treatments, I’ve been able to see such a dramatic transformation at home, with a comparably minute investment of $20 to $30 in a dermaroller—and far less blood, pain, and inflammation, too. Why isn’t everyone doing this?

Perhaps it’s because they just don’t know about it or where to begin. Maybe they’re convinced that it hurts—all very understandable assumptions. So let’s clear that up, shall we?

What to Expect When Dermarolling Under-Eye Bags

Let’s get one myth out of the way: It doesn’t hurt that much, especially when you’re the one in control. However, there are a few pointers to note before you begin rolling. First things first, never start dermarolling without slathering on some kind of primer first: Not only does that medium serve as a buffer between the needles and your skin, but when you use a great treatment, you’re also literally pushing those ingredients deep into your skin for maximum absorption—far more than you would just by using your fingers and leaving it there. I typically use a serum with additional collagen-boosting ingredients like hyaluronic acid, such as the Grown Alchemist Age Repair Serum ($99). Just be sure to avoid super-reactive elements like retinol or vitamin C.

Hyaluronic acid is a naturally occurring polysaccharide found in the human body. It acts as a cushioning and lubrication agent for our joints, nerves, hair, skin, and eyes. When used in skincare, it acts as a moisture binder, which means that it will attach itself to the water in the cells (while also attracting and holding water from the air) making them plump.﻿﻿

After cleansing your face and applying a layer of serum or whatever primer you’re using, it’s time to start dermarolling. Stretch your skin taut, and roll across it diagonally, horizontally, and vertically, pressing as hard as you can tolerate. I focus on my smile lines, lips, and underneath my eyes as well as any acne scars or discoloration that need tending to. After you’re done rolling, apply another layer of serum to your face and sterilize your device with rubbing alcohol before storing it in its case.

Also, another safety tip to be mindful of: Try not to roll over one single area more than a couple of times and never use your roller on existing zits or open wounds.

In-office microneedling means physicians can get a bit deeper into your skin, as they are using professional tools like the aforementioned pens, which essentially work to "stamp" your face with needles rather than roll the needles across the skin.

Even though at-home devices might not go as deep into the skin, they can still be effective. When choosing a dermaroller to purchase, you need to pay attention to the needle size. Most experts I’ve spoken to advise anything between 0.2 and 0.75 millimeters for use at home. (Benjamin advises staying under 0.5 to avoid damage). I’ve only ever used 0.2 or 0.5 since I mainly focus on my lips and underneath my eyes, and those areas are particularly delicate.

I’ve purchased rollers from Amazon for as little as $12. Benjamin chided me a little for this; though, as with anything I purchase from that vast marketplace, I pay close attention to reviews before pulling the trigger. Still, it might be wiser to buy something from a more verified retailer, like Benjamin’s own Stacked Skincare. 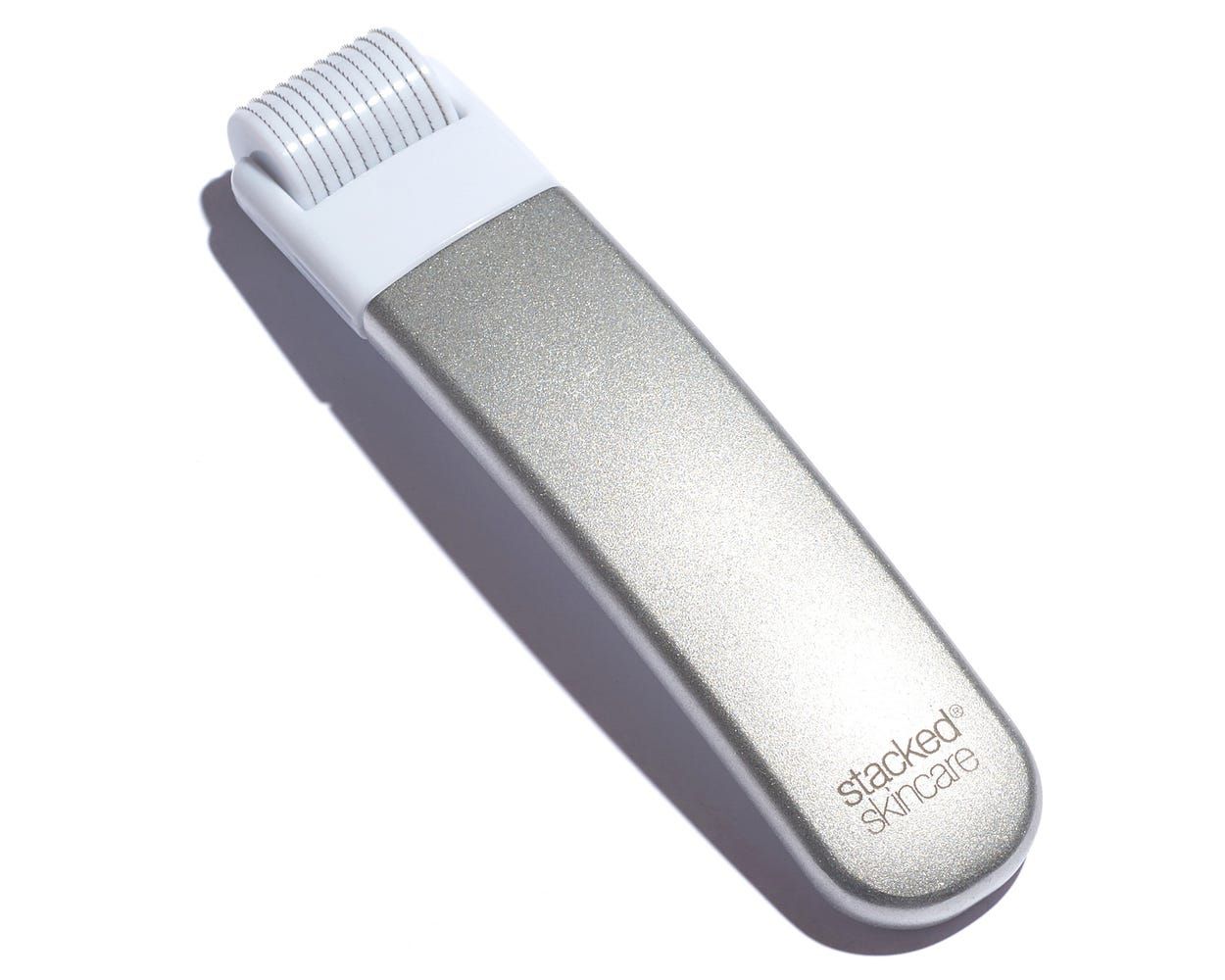 You’ll want to replace your micro-roller after a few uses due to the potential of bacteria on the roller head.﻿﻿

Dermatologists use something called a Dermapen for in-office treatments, and that’s a little more intense—bleeding is a common side effect. But a dermaroller is a little less hardcore, and you can press as firmly as your pain threshold allows. (If you've ever experienced a cat licking your face, the sandpapery sensation is comparable).

An added benefit of dermarolling is that it can help you better apply other products. "Dermarollers also soothe the skin, spread and penetrate skincare products to all skin parts, and drain fluid from the face, which can temporarily reduce eye bags," explains Somenek. So be sure to slather on some eye cream or oil before you roll, to reap all the benefits.

As for how often you should roll, I use my dermaroller two or three times a month. Some people recommend using it more often—Benjamin recommends a few times a week—but I like this frequency; it’s enough for maintenance without feeling too harsh on my skin. Sometimes, if it’s been a particularly stressful month or if I’ve been traveling, I’ll see those familiar shadows start to creep up again toward the end, but it’s nothing my go-to cream concealer (see below) and upping my water intake can’t help.

Make no mistake: Maintenance is key. I've gone through periods where I stop dermarolling (for reasons mostly having to do with laziness) only for those under-eye bags to start creeping in again. It's your choice whether to embrace them or roll them away again—I can vouch for both. 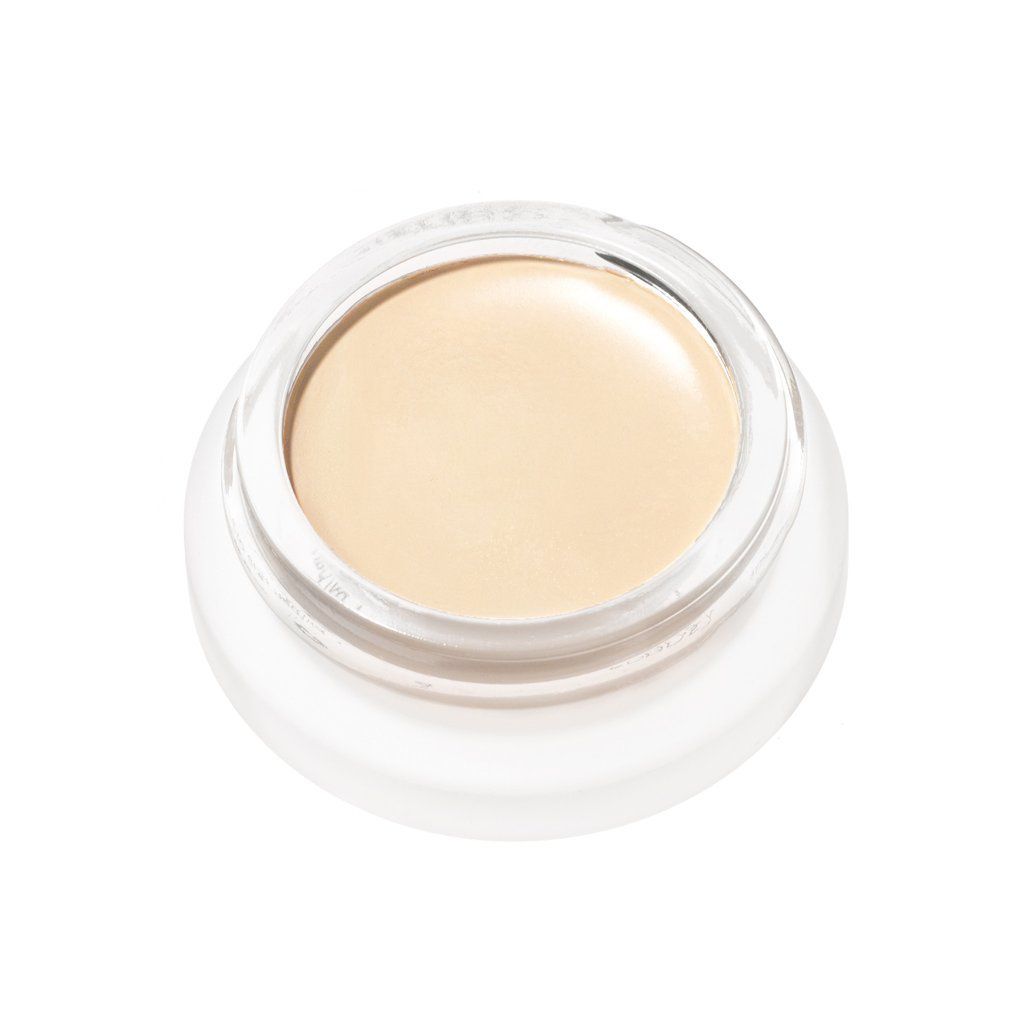 I am officially hooked. At just 23 years old, I was used to looking perpetually exhausted. Genetics had played a role, sure, but very long hours at the office and a stress-ridden lifestyle certainly hadn’t helped. Even if I was able to diminish the shadows under my eyes with a heavy layer of color-correcting concealer, the bags remained—and in some cases, the creasing made them look even more obvious. But I was still happier to resign myself to this rather than the alternative: As much as I wanted to say screw it and just go without makeup, you can only get (rude) remarks like “Are you feeling all right?” and “Whoa—late night?” so many times before it starts to sting.

I was floored to realize this wasn’t how it had to be. The premature lines on my face disappeared and my upper lip plumped up, and finally—finally—I didn’t look so tired anymore, all thanks to microneedling. And others were starting to notice.

And they wanted in—or really, I wanted my friends, family, and coworkers to try dermarolling themselves. But then again, it’s probably easier to convince someone to try a protein shake than roll hundreds of tiny needles into their face. That’s fair.

Still, the results don’t lie, and slowly, a handful of people in my life have already become converts. “What needle size should I get again?” is a fairly common chat message I receive at the office. One of my best friends in New York sends me close-ups of her face on the regular. “This is so crazy!” the captions read. "How is this even working?!”

FAQ
How to Get Rid of Dark Circles 7 Different Ways
Article Sources
Byrdie takes every opportunity to use high-quality sources, including peer-reviewed studies, to support the facts within our articles. Read our editorial guidelines to learn more about how we keep our content accurate, reliable and trustworthy.