At the beginning of this year, I told myself I would make changes to my lifestyle that helped me feel healthy, balanced, and for once in my life, consistent. No more crash diets or smoothie cleanses or boot camp workout ultimatums. Instead, I would commit to finding exercise I actually enjoyed and drink a gallon of water per day. The goal was to focus on small things designed to feel easy for not just the year ahead, but the rest of my life. The exercise happened gradually. First, I started taking a pilates class that, though challenging, I grew to love. When COVID-19 happened, I switched to at-home workouts that combined cardio and weight exercises. The water goal was a little trickier, though. To make it easier, I decided it might help to have a visual reminder of how much water (or how little) I had consumed in any given day. So I searched Amazon for one gallon water bottles and purchased the first one I found.

The particular water bottle I purchased happened to be marked with time of the day and inspirational messages, designed to motivate you to drink more throughout the day. It wasn’t exactly aesthetically pleasing, but it did the job. Each morning when I made my coffee, I would fill the water bottle to the top and then use it as a pitcher throughout the day. The first couple months, I felt like I was peeing every two hours and chugging water in between. After a few months, though, I noticed that I was actually drinking even more water than a gallon (especially if it was a hot day or I had worked out). And on the days when I didn’t drink a gallon, I noticed. My sleep suffered, my skin felt less hydrated, and headaches seemed to pop up more frequently. It wasn’t the end of the world when I didn’t drink the whole gallon, but I noticed I felt much better when I did. So I kept doing it. Six months later, I have had exactly a gallon of water or more almost every single day and I’ve never felt better. 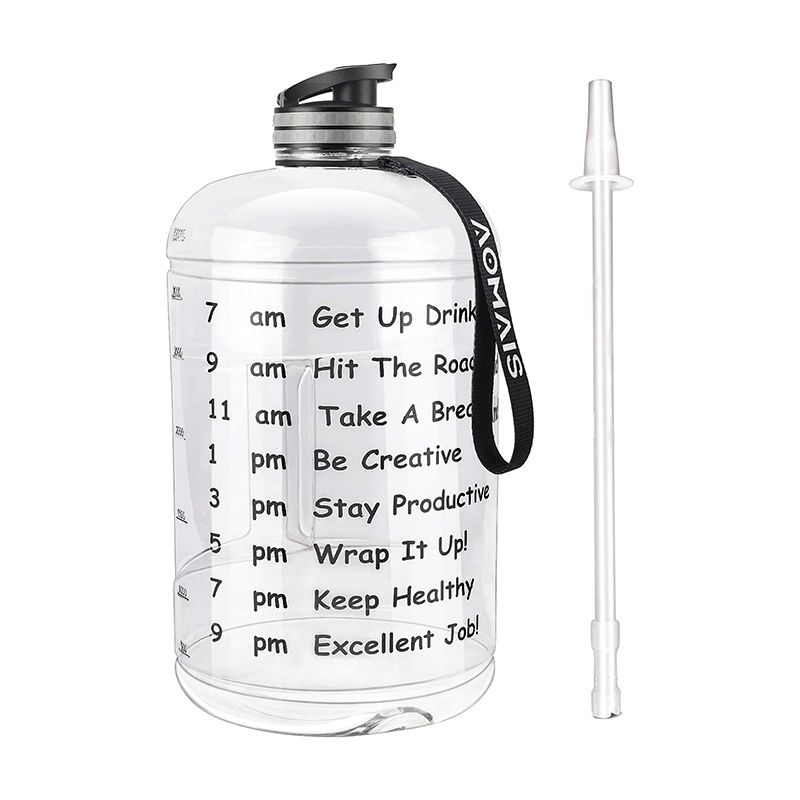 According to Dr. Brendan Camp, feeling good is only the tip of the iceberg when it comes to how drinking more water can positively affect your body. “The simple fact that the skin is about 64 percent water highlights the importance of adequate hydration to maintain healthy skin,’ Dr. Camp says, noting that eight 8-ounce glasses of water is usually recommended, though there is no hard and fast rule. “Hydrated skin demonstrates turgor, the state of rigidity that occurs when something absorbs water. This makes the skin plump, firm, elastic, and youthful in appearance. Dehydrated skin can accentuate features of mature skin, such as fine lines, dullness, and laxity.”

Now, here is where I should mention that I have tried to conquer this challenge in the past. I’d calculate out the number of cups of water I’d need to drink and try to make lists to remind myself throughout the day to check them off. But it was too easy to lose track of how much I had had and too easy to forget to keep track altogether. The gallon water bottle is the only thing that’s worked for me, and I know it’s in large part because it’s a visual reminder every time I’m in the kitchen. If it’s 3 p.m. and the water bottle is still completely full, I notice immediately and try to correct the problem.&nbsp;

As Manhattan-based learning specialist, Rebecca Mannis, Ph.D., tells me over email, there’s a whole section of the brain dedicated to retaining and processing visual information that can explain what a visual reminder may lead to repetitive, positive habits (like, say, drinking water more regularly). This part of the brain connects with other parts of the brain, creating “a representation, or internal sense, that then primes us to connect to the item when we see it again.” Dr. Manis explains, "Through repetition, those connections repeat at a faster pace over time," Dr. Manis explains.

Recently, I became so used to drinking a gallon of water everyday, I decided it was time to upgrade my water “pitcher” situation. Now, my fiancé and I have a two-gallon glass water dispenser in our kitchen that we refill each morning and use throughout the day. It’s the same visual reminder each day of how much or how little we’ve hydrated, and it’s actually nice to look at, as a bonus. But I don’t think I would be in the habit of drinking water so consistently had it not been for that first bottle. And even though I don’t keep it out every day as I used to, I still keep it for road trips, vacations, or any other time that I know I’m going to want to stay hydrated on-the-go.

It’s important to note, though, that just because I decided to aim for a gallon of water per day doesn’t necessarily mean your goal needs to be the same. Dr. Camp notes that there is no “hard and fast rule” when it comes to water consumption. In fact, Dr. Sapna Palep says that the common eight glasses per day rule is a myth. “There’s no right or wrong amount of water to drink daily as long as you are staying hydrated throughout the day,” Dr. Palep says.

And while staying consistently hydrated has benefited my overall health, there’s also the added bonus of actually sticking with a goal and knowing that it’ll be easy to stick with it for years and years to come. Plus, hey, if you’re really struggling with drinking water, the motivational sayings on the side of the bottle actually kind of help sometimes.

Can You Drink Too Much Water? We Investigate