I'm not a morning person in the slightest. When my alarm goes off, I immediately hit snooze and fall back asleep. After the seventh ring of my alarm, I stare up at the ceiling and mutter a pained Whyyyyy? before rolling off my mattress and onto the floor. It's not a pretty sight.

One day, after discussing ways to become a morning person with my team, I wondered aloud if there was some sort of wake-up pill to help me get out of bed on time. I was half-joking but also half-desperate. After only a minute of searching on Google, I was directed to a supplement called Easy Up Wake Up Aid. While that product is no longer available, there are a number of other supplements marketed as wake-up aids, and many have similar effects.

Read on for more about how wake-up supplements work, an expert's take, and my experience taking them.

What Are Wake-Up Pills?

So-called wake-up pills are actually supplements that contain a mixture of vitamins aimed at giving the user energy. This mix might include caffeine, CoQ10, or other energy-producing ingredients. Many work via a time-release method, claiming to offer little bursts of energy throughout the day. Though they're often marketed as ways to wake you up, they aren't the best to use every day, though: "These are not a sustainable way to maintain energy and not something I'd recommend," says Marisa Moore, a registered dietitian based in Atlanta.

But after sifting through the customer reviews, most of which gave the product I chose five stars, I still felt confident purchasing it. However, after browsing the ingredient list—caffeine, cellulose, dicalcium phosphate, stearic acid, carbomer homopolymer, hydroxypropyl methylcellulose (I know), magnesium stearate, sodium bicarbonate, etc.—and not being able to pronounce half of them—I decided to speak with my physician first, just to be on the safe side.

I brought a packet into his office to give them a look. "Two hundred milligrams is equal to two cups of coffee, which is about what you drink daily, so I don't see the harm," he explains before warning me: "Just don't use them too often." Because I have so much trouble fully waking up, I was hoping I could use these consistently. But doctor's orders. 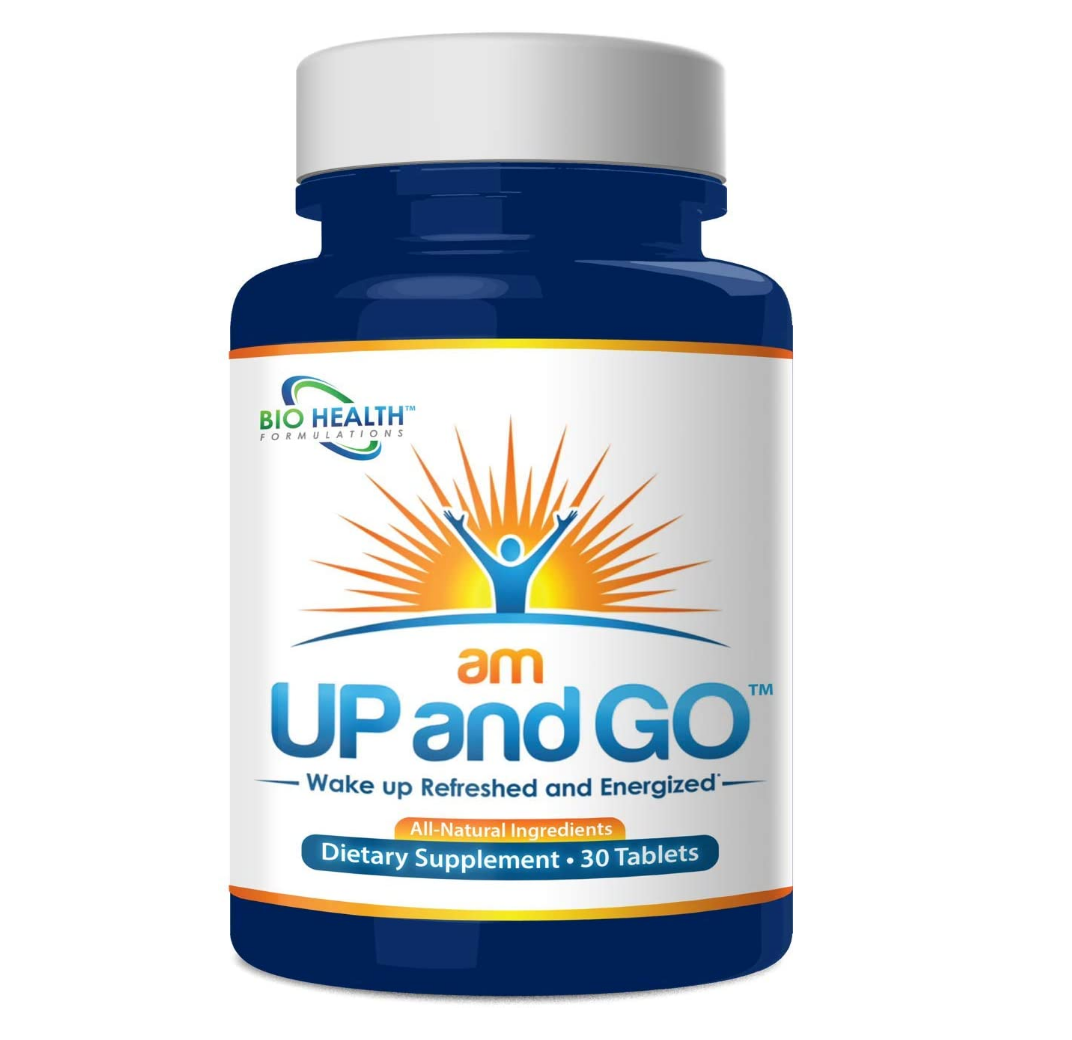 • Don't cause the dreaded "caffeine crash"

• Still allow you to get a solid eight hours of sleep

Scientifically speaking, caffeine works by targeting the adenosine receptors in the brain, basically encouraging the body's neural receptors to wake up and fire at all cylinders.﻿﻿

Wake-up and energy supplements work via time-released caffeine that is meant to wake you up seven to eight hours after taking it. The amUPandGO supplement above claims to offer both uninterrupted sleep and no crash (or jitters) upon waking up the next morning.

What To Expect When Taking Wake-Up Pills

Knowing that the supplements must be taken before hitting the hay, I went to bed at 11 p.m. with hopes of waking up bright-eyed and bushy-tailed at 7 a.m. However, falling asleep was a bit of a struggle. I was wide awake, and I made it through an entire episode of Fallon (most nights I don't make it past the monologue). Strike one, I thought.

But the next morning, I actually did wake up at 7 a.m., feeling very awake. I hopped out of bed and went into the living room to watch some Saturday-morning television, but I felt sleepy within an hour. Then I did something I'm not proud of: I took a nap. An hour after waking up. Don't say you've never done it before. Strike two.

I woke up and went about my day, making a pit stop at the coffee place up the street for my usual soy iced coffee. But as the day wore on, I started feeling a little sick. I was feverish, my heart was beating a bit faster, and I needed to stick my head near the closest A/C unit. It was pretty wild, and I figured it was just due to the extra dose of caffeine. Never mind the fact that my body was also tingly. I came home and chugged water and relaxed for a bit, hoping it would wear off quickly. It did, but it was a bit scary. I skipped the next few days to give my body a break.

Thursday came around, and I popped the supplement at 11 p.m. I felt very alert again and worried I'd have trouble falling asleep, but within about 15 minutes, I wandered off to dream-land. The next morning (around 7:30 a.m.), I woke up not as alert as the first morning I took the supplement, but I felt much more awake and ready to go than on a non-supplement morning. Staying awake was also much better that morning, and I definitely didn't need a single cup of coffee (I'm sure it's better that I didn't have one). I powered through my workday feeling completely focused, no midday slump in sight. However, the jitters returned, and I felt a bit off again. Strike three.

There are a number of side effects associated with taking caffeine pills—anxiety, diarrhea, and headache are among them. They're also not safe to mix with alcohol or cigarettes and can increase blood pressure.

That being said, caffeine has been used as an energy-booster throughout history, and a standard dose (roughly 200 to 400 milligrams per day or the amount found in one to two cups of coffee) is perfectly safe for most people to consume. In fact, some studies have found that ingesting caffeine can actually offer a host of benefits, including increased happiness, improved memory, and sharpened focus. When used topically, caffeine also has a host of good-for-your-skin properties, which we've written about at length.

All in all, these supplements definitely work, but I don't love the way they make my body feel. As much as being awake and alert sans coffee is nice, the rapid heartbeat and jitters were enough to scare me away from using them weekly, so I think I'll save the next pill for my red-eye or something.

Most caffeine pills are likely safe. In terms of dosage though, there is the issue of dependency. If you become too reliant on them to wake up, it may become a vicious cycle. Fortunately, there are many other—more natural—options to wake up and maintain high energy levels throughout the day. The keys, says Moore, are to "prioritize sleep, eat enough food to energize but not weigh you down, and stay hydrated."

Also important for maintaining energy—though it might sound counterintuitive—is to take it easy, allowing for regular breaks throughout the day: "If you spend lots of time working inside (especially on a computer), taking a break to walk outside or getting fresh air and a change of scenery can help boost energy to help you power through the rest of the day," she says. For now, I guess it's back to being one with my mattress.

20 Ways to Fall Asleep Faster, According to Sleep Experts
Article Sources
Byrdie takes every opportunity to use high-quality sources, including peer-reviewed studies, to support the facts within our articles. Read our editorial guidelines to learn more about how we keep our content accurate, reliable and trustworthy.