How Many Push-Ups Should You Do Per Day? 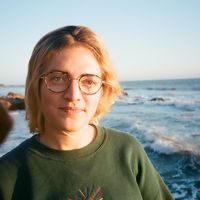 Kathleen Ferraro has been published in local and national publications, including Outside, Travel + Leisure, NBC, Chicago Reader, and more. Currently, she's a wellness writer for Bustle.

Traci Copeland is a fitness trainer based in New York. She specializes in yoga, fitness, dance, and running and is a Nike Training Club Master Trainer.

What Are The Benefits of Push-Ups? What Do Push-Ups Do to The Body? How Many Push-Ups Should You Do Per Day?
How to Tell if You’re Overexerting Yourself The Takeaway

When you think arm day, push-ups are one of the first drills that come to mind. And there's a reason for that—the exercise strengthens major muscles in your upper body, builds stability and endurance, and is customizable to your fitness ability, says Aliyah Sims, a Rumble trainer on Equinox+. But just how many push-ups should you do to reap all those benefits? Below, trainers tell Byrdie why you should add push-ups to your workout routine and how to avoid overdoing it.

What Are The Benefits of Push-Ups?

It's no accident that push-ups are a gym staple, says Steve Stonehouse, a NASM-certified trainer, and director of education for STRIDE running studios. You can work your upper-body muscles and soak in all the benefits of this exercise, whether you're new to push-ups or a seasoned pro.

What Do Push-Ups Do to The Body?

When it comes to push-ups, one thing is for sure: Your upper body will feel the burn. Push-ups of all kinds engage your chest, back, shoulders, and arms, and you can try different variations of the exercise to target specific muscles further. For instance, performing a standard push-up with your hands underneath your shoulders will emphasize your chest, whereas a narrow push-up with your hands closer to your sides will target your triceps. And regardless of your variation, holding your body in plank form throughout the movement forces your core to stay engaged until you complete your reps.

Push-ups can also get your heart pumping, according to Sims. Using all those major muscles at once forces your heart to work hard to deliver blood to that tissue. And over time, that healthy stress on your heart can boost cardiovascular health.

But practicing good form is critical to getting the most out of your push-ups, says Stonehouse. Whether you're doing your push-up on your knees or toes, prioritize completing the entire movement (that's lowering down until there's a 90-degree bend in your elbows and then pushing back up) with a long, straight spine to avoid putting unnecessary stress on your joints. If you break form, you might want to cut back on reps or modify. Form breaks make it harder to experience the movement's full benefits and can likely cause injury.

How Many Push-Ups Should You Do Per Day?

Everyone's fitness level and ability are different, and the number of push-ups you should do per day likewise varies from person to person, says Sims. For starters, she recommends incorporating push-ups into your workouts three to four times a week to give your body time to recover in between sweat sessions. If you're new to fitness or push-ups specifically, she recommends starting with five to 10 reps per workout and increasing from there. If that feels doable, Stonehouse suggests doing two or three sets of 10 push-ups with a short rest between each set. Once that amount starts to feel comfortable, you can slowly increase your reps to a number that makes you feel challenged but not like you're pushing yourself to your physical limit.

And don't be shy about using modifications if you need them, adds Stonehouse. Sims recommends lowering your knees to the ground or doing incline push-ups against a wall instead of on the floor.

How to Tell if You’re Overexerting Yourself

Remember — doing push-ups isn't always about giving your maximum effort, cautions Stonehouse. "Just because you can do a certain number of push-ups in a day doesn’t always mean you should," he tells Byrdie. Allowing your body to recover from exercise is important to make sure your muscles stay healthy and strong, so he recommends prioritizing that balance instead of trying to do as many push-ups as you possibly can.

One sure sign that you're overdoing it? Pain, he says. While some soreness is normal after a workout, feeling pain during or after your push-up session is a sign that you're over-stressing or injuring your joints or muscles, he says. If that's the case, hold off on push-ups and consult with your doctor to avoid further injury.

Working yourself to the point of exhaustion is another signal that you're doing too many reps, adds Sims. While you should have to put in some effort to complete your sets, feeling like you need to collapse afterward could indicate that you're overdoing it. Instead, she recommends listening to your body — do enough push-ups that you feel like you're challenging, not exhausting, yourself.

Push-ups are a go-to exercise for a reason: They build upper-body and core strength, improve your endurance and stability, and are a versatile move to work into strength training routines of all kinds. If you're new to the exercise, start with up to three sets of 10 reps per workout about three or four times a week, using any modifications that make the movement more comfortable for your body. If you want more, pick several reps that make you feel like you're putting in the effort, but that doesn't completely exhaust you. And if you feel discomfort or pain beyond usual post-workout soreness, hold off on the push-ups to give your body time to recover.

Reverse Pushups: What They Are and How to Do Them
Featured Video
Article Sources
Byrdie takes every opportunity to use high-quality sources, including peer-reviewed studies, to support the facts within our articles. Read our editorial guidelines to learn more about how we keep our content accurate, reliable and trustworthy.