How Isolation Is Helping Me Finally Face My Feelings 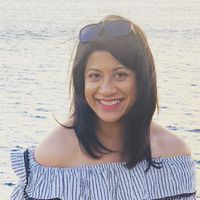 Nikhita Mahtani
Nikhita has worked as a writer and editor in NYC for over seven years. Her work has been published in GQ, Instyle, Bon Appetit, and more. She has written for Byrdie since 2020.
Byrdie's Editorial Guidelines


According to the National Alliance on Mental Illness, approximately 18.5% of adults in the United States experience mental illness every year. That's a significant portion of our population—one in five people—yet the stigma and misunderstanding that surround mental health remain. Add a lengthy quarantine and global pandemic to the mix and the topic of mental health, as well as figuring out new ways to understand and take care of your own, is more important that ever.

As editors, we’re not here to dole out diagnoses, we’ll leave that to the doctors. What we are hoping to do is offer some reprieve—through helpful advice, understanding, or simple connectedness in a time when physically we’re all alone. That's why we highlighting raw, unfiltered stories of anxiety, isolation, depression, and the catharsis therapy or medication can bring. The hope? To feel as comfortable discussing our own mental health as we do our skincare routines.

“I don’t run—except from my feelings,” I quip, whenever anybody asks me about running marathons or going to (ugh) Barry’s Bootcamp. And while that statement is usually accompanied by a laugh and a suggestion to try another workout, it has so much truth to it: I truly detest having to sit with emotions, particularly ones that feel negative. And so, instead of actually allowing them to marinate, I fill my schedule up with work, friends, events, and exercise classes. That sense of busyness has always made me feel more important, like my work matters, and that I’m strong and self-sufficient, so I don’t actually have to pause and think about how I’m feeling emotionally. It allows me to fill up my days in such a way that I’m so exhausted by the time I get home that I hit my pillow and go straight to sleep—no late night, deep thoughts here.

But then, of course, COVID-19 hit, and with that came a lot of free time I wasn’t used to. The first month of isolation had me living at home again, fewer articles while editors figured out their freelance budgets, absolutely no social life except for a few very exhausting Zoom calls, and of course, nowhere to go. I found it hard to fill my time the way I used to in the past, and even though I was actively staying busy through working out, calling my friends, spending time with my family, reading, and working on some online classes I recently discovered, it was absolutely not the same. I didn’t feel exhausted every time my head hit the pillow, I found it extremely hard to fall asleep, my anxiety was at an all-time high. I also found myself confronting emotions that didn’t seem to make any sense: abandonment, anger, frustration, and loss. But of course, instead of sitting with those uncomfortable feelings, I chose to find new ways to occupy my time… like organizing my closet, for instance.

I think the realization I could no longer run from my feelings hit when I woke up one morning and just started crying. It wasn’t an ugly cry, per se, but more so those quiet tears that hit you from out of nowhere. I was literally forced to face my feelings in a way that felt intimidating, because at that moment, I had no choice in the matter. Now, I’ll be the first to tell you dealing with these things isn’t easy—in fact, when you’ve bottled up your feelings for so long, actually giving yourself the opportunity to sit with them is absolutely terrifying. There were butterflies in my stomach, and an overwhelming sense of hopelessness at all times, even as I went about my day.

Thankfully, I have amazing friends and a therapist who made me realize the extra socializing was just a way to outrun some difficult emotions from my past, and unfortunately, you can’t run from your feelings forever—they eventually catch up with you. What I did realize, however, was when I gave myself permission (and time) to feel how I feel (instead of judging it, questioning it, or dismissing it), then the feeling would eventually pass. I learned so much about the way I react to people and the childhood issues that bring about my reactions, though, and eventually, it got easier.

Below are the four major tools that helped me, and that I hope to continue long after quarantine is over.

I’d sort of been meditating since December, but I took it up a notch during quarantine by making sure I did it every single day, along with a few online meditation classes. Those were an hour long, which was pretty intense. The reason meditation works for me isn’t because my head completely clears (that rarely ever happens, honestly), but because I can somehow make sense of the thoughts in my head for just a little while. By focusing on my breath, visualization, or affirmations (whatever kind of meditation it is), I can dissect the anxiety in my brain. Then, when I get out of meditation, I can figure out exactly what I was feeling. It’s strange to say, but when you haven’t really been in touch with your feelings, you don’t even know what you feel. It felt very empowering to name the emotion, because once I knew what it was, I was better able to deal with it.

Journaling was one of the hardest things to get into, especially because by doing it, I was putting into words everything I was feeling—and I didn’t really know how to do that. I was constantly asking myself why I felt a certain way, instead of just allowing it to happen. Over time, though, I was able to pinpoint exactly which situations made me feel a certain way (being ignored made me feel unimportant, for instance), and what to do to calm myself. I write about what I’m experiencing every single day, and it’s honestly the hardest part of my day—I take a ton of time to get to it. However, I’m always happy I did.

I’m not a yoga person at all—I gravitate to higher intensity cardio like spinning and boxing. However, my little sister just got into Zoom yoga classes and didn’t want to do them alone, so I joined her… and in only a few minutes, I felt a lot of my stress and anxiety deplete. Because we held the poses for so long and had to breathe through the discomfort, my mind naturally began to wander. It was the perfect exercise in allowing myself to feel emotions while doing something else, so that I could be in my feelings without being consumed by them. Over time, this got easier, and the endorphins from the yoga made me feel immediately better afterwards.

It sounds weird, but hear me out: On days I'm really frustrated and sad, I take a nap. Earlier, I used to look at it as a form of escapism, but now, I realize I’m unable to determine how I feel unless I’m rested. Dealing with years of trauma is mentally exhausting, and if I’m going through something, I allow myself some self-compassion and take a rest. When I’m up, I feel calm enough to figure out what’s going on in my body that day.

By continuing these practices consistently for two months, I realized a lot about myself. For one, going out all the time was simply a coping mechanism to avoid feelings of sadness or loneliness. I realized I was still grieving the loss of a relationship that I thought I was over. It’s been hard releasing that sadness, but i'm working through it. Eventually, it’ll fade away.

I also came to terms with the fact that, often, my reactions are based on my own subconscious triggers, and not necessarily what's going on right in front of me. From that, I've gotten to a place where I’m able to react from a place that feels more calm and understanding. This means I sometimes take some time to address issues and go pretty slow, but it also means that when I do have a response, it’s a healthy one. This has removed the drama from almost all of my relationships, and has also made me realize that I don’t have to run anymore.

Confused About CBD in Skincare? Here's Everything You Need to Know
Featured Video