How I Learned to Love My "Imperfect" Skin 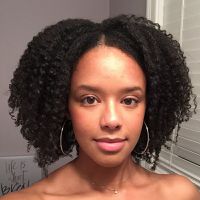 Battling acne often feels like an uphill battle. And as a Black woman, I understand the only thing more difficult than the acne itself is the post-inflammatory hyper-pigmentation that comes along with it. While a breakout may last a week or two, the damage and discoloration caused can last three to six months, even while actively trying to fade the marks. This means even when my skin texture is improving, my face is still showing the effects of a breakout from months ago. Ultimately, this was just not going to cut it if I wanted "flawless" skin.

But after years of Retin-A, a vitamin A topical acne cream, various forms of birth control, and countless over-the-counter face washes, I realized the problem wasn’t my skin. Although yes, my skin still had occasional breakouts, which I eventually found out were hormonal, the only true issue was with myself.

Once I realized I had a confidence issue rather than a skin issue, I was able to address the problem. I always had great self-confidence, courtesy of values instilled by my mother, but my skin troubles were an unexpected hurdle. Unfortunately, acne and hyperpigmentation don’t always resolve themselves on our timeline. So, I was determined to accept and love myself exactly as I was—breakouts, discoloration, et al.

My biggest inspiration was a profound statement I heard in an interview, which I still read often when I need a gentle reminder. Tracy Ellis Ross, one of the few people I fan-girl over, spoke eloquently about how she overcame low self-esteem and her own personal negative self-talk. She quoted Pema Chödrön, “Right now, can you make an unconditional relationship with yourself—just at the height you are, the weight you are, with the intelligence that you have, and your current burden of pain —can you enter into an unconditional relationship with that?”

The words helped me realize I was facing a common struggle, one even celebrities deal with. I used to think others' insecurities weren’t as bad as mine. I now realize that was completely inaccurate. Everyone on this planet has had an insecurity, struggle, or negative view of themselves at one point or another. I realize now I am not special in that regard, which helps me to feel less alone. I became more hopeful because I knew if other people can overcome low self-esteem, then I eventually would to.

I have been able to restore my confidence, and ultimately my self-worth, by realizing I am more than my imperfections. I learned this by facing the issue head-on. While at first I I felt uncomfortable without makeup to cover my scarring, I forced myself to stop wearing it for that exact reason. I began to leave the house more frequently with no makeup, forcing myself to display my insecurity to the world. I very quickly came to realize no one cared if my skin was "flawless" or not.

Skipping makeup on my most insecure days was a huge, but speaking positive affirmations out loud and with conviction was the most helpfup. With no makeup, I would look myself in the mirror and say positive things about myself, my skin, and my life as a whole. I had to remind myself I was worth more than my appearance, with a life full of friends, family, and support.

Here's thing thing: I didn't believe the positive affirmations at first—and I felt quite ridiculous talking to myself in the mirror. But, I continued to do this every day until I found my way. I worked on myself, for myself, by myself. You and you alone determine your self-worth, so the next time you feel insecure or uncertain, remember you're allowed to feel that way. However, at some point, dust yourself off and remember who you are and why things like clear skin and "perfection"—whatever that is—don't matter. Your self-love is now, and will always be your greatest gift to yourself as a human being.