How I Fixed My Flat Nose (And, Maybe, We Can Fix America?) 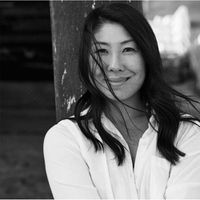 When I moved to NYC after college and got a job as an assistant to the editor-in-chief of a glamorous glossy magazine, I felt I’d arrived. Within months, I’d gone from a preppy journalism school student in fisherman sweaters to a Conde Nasty, a makeover that involved dashing to fetch Diet Coke and tea teetering in stilettos and pencil skirts so narrow I could never take a full stride. The confinement of that uniform made me feel oddly secure, swaddled in brand-name belonging. It was yet another step in my own transformation towards the life of my dreams. Everyone, it was said, left that magazine thinner, blonder, better than when they arrived.

Thinner and better at my job, yes, but I would never be blond. I’ve always been one of a very few if not the only Asian-American in the room, at school and work. My hair, my mother’s pride and joy, never touched by chemicals, was as black as it was shiny. I had never had a bad hair day in my life. Sure, I went through my awkward phases. You know: braces, eyebrows that waxed and waned from unkempt caterpillars in the 80’s to butterfly antennae in the 90’s. But my hair, my old faithful, had never changed. Throughout my career as a magazine editor, numerous colorists offered to lighten my hair, a luxurious privilege to add chestnut highlights, to bring out the red-gold. But something always held me back.

I didn’t want to be a princess, I wanted to be an editor-in-chief.

Beauty is often dismissed as vanity. But it can also be a powerful weapon. To decide who and what is beautiful is power, one that can influence individuals and generations. Working in magazines made me feel powerful. I was on the inside, deciding what was cool, what women would want to wear, buy, and look like. As a kid, I used to read magazines in bed with my Yaya, my grandmother, like they were bedtime stories. My fairy tale didn’t involve Prince Charming, but a corner office with a view, front row seats at the fashion shows, a car and driver, friends in high places, and a closet full of designer clothes and shoes. I didn’t want to be a princess, I wanted to be an editor-in-chief.

Left: A Big Bird birthday; Right: My dad, me, and our cute noses.

Of course, in all the issues I pored over, I never saw a single face in those fantasy pages that looked like mine, round cheeked with black eyes that disappeared when I laughed. Maybe that was their allure. A magazine wasn’t a mirror. It was an escape from my real life in which kids at school pulled at the corners of their eyes and asked me why my nose was so flat. I was at a loss to answer them. I had no idea. I hadn’t even known that it was.

Ask any person of color and they will always remember the day they learned that they were different. That day will mark a before and after. One minute life was normal; they were normal. The next, one feature they took for granted—skin, hair, eyes, nose, all God-given, passed down through their family line—they come to hate.

For me, it was my nose. I remember as a five-year-old looking in the mirror, scrutinizing it from all sides. What’s wrong with it? I used to pinch it before bedtime hoping to make it grow until it was red and sore. Even now, on bad days when everything goes wrong, I look in the mirror and it’s all I can see. Why IS my nose so flat? I ask myself the question I can never answer. I look at it accusingly, blaming it for all of my problems. My poor nose, the one I got from my dad. It’s done nothing but help me breathe all these years.

My sense of smell is so acute, it’s both a blessing and a curse. The downside: I’m assaulted daily by the invisible. What sends an alert down my spine, doesn’t even bother others. What can turn my stomach, many don’t notice. The upside: I can recall with perfect sense memory the smell of my Yaya’s cooking or how her perfume, L’Air Du Temps, smelled on her skin and hair. During these days in lockdown, having fled New York City for sunny Los Angeles, I arrange fresh roses and gardenias from my mother’s garden in my bedroom and am so transported, I can almost forget for a moment the chaos of the world. My nose is one of the most sensitive parts of me for better or worse. It’s even given me a sixth sense for a good story as a journalist. I have followed my nose my whole career and it’s taken me places I could never have imagined.

In spite of or because of my sharp yet flat nose, I climbed the masthead to achieve my childhood dream of becoming an editor-in-chief. Every day as an editor, I did the work of writing myself and women like me back in the story, putting the stories and faces of people of color, into the pages of my magazines. All the things I saw and wished for my career, torn from the pages of a magazine, came true. My newfound power felt good. It smelled like the coffee my assistant brought in for me every morning, lunch in a corner booth, the latest beauty products delivered to my desk with lovely handwritten notes. I felt like the star of my own movie, a rom com script come to life. Only when the montage rolled in my head, a soundtrack playing, it wasn’t me that I saw, but Renee Zellweger or Anne Hathaway or another white leading actress. A lifetime of media images in which I never saw another face like mine had taken its toll. I was doing the work for others, but I had erased myself from my own story.

For people of color, invisibility is a force we battle every day. We must fight to be seen beyond that one gaping shortcoming we can’t seem to escape: the skin, nose, eyes, hair of the Other. For Asians, invisibility is also a cloak we put on ourselves, a stealth mode of success. Within the plurality of our own cultures, we’re taught from childhood to be good, to obey, to never show weakness, to suffer in silence, to never lose our cool, to always turn the other cheek, to channel our frustrations into our work. We’ve given rise to the model minority myth, a golden handcuff of achievement at the price of full personhood in America. How do we uncuff ourselves?

This pandemic has revealed a side of the Asian and Asian American experience that we’ve kept hidden for so long, from others and ourselves. Our vulnerability. In the early days of COVID, Asians were blamed for the virus. Things got ugly. Now, the world has grown even uglier than before, violence surging against our elderly, those we hold so precious but are easy targets for those with simmering resentments and anger over their own lives.

In Asian culture, we revere our elders. It’s such a core value and shared belief, I can see the faces of my own family in the videos on our social media feeds and on the news. I feel shock, sadness, anger with a violence and intensity that’s more than outrage. It’s the pain of a reopened wound.

As a child, I watched my own parents and grandparents taunted, teased, verbally and physically assaulted. I remember an incident coming home from the grocery store when neighborhood boys pelted my family with snowballs. My mother shielded me with her body as they shouted, Ching-chong! Ching-chong! She yelled, SONOFABITCH!!!! as they ran away.

I don’t say this to elicit pity. I say this only to illustrate what it’s like to be non-white in America. To work, to take care of our families, to drag ourselves in bad weather to the grocery store when we long for a nap or a hot bath, to hold our child’s hand crossing the street as our minds whirr through an endless to-do list, just like anyone else—and then to have snowballs and epithets hurled at us. To be left standing in the middle of the street shouting curses at the top of our lungs with no one listening. Multiply this by 365 days, year after year. That’s what it’s like to be a person of color, to be an immigrant, in the USA. And that’s not even a bad day. It could be so much worse.

In an interview with the New York Times, Steven Yeun, the Korean-American star of the newly released, critically acclaimed film, Minari, described the Asian American experience as “what it’s like when you’re always thinking about everyone else and nobody is thinking about you.” I have never forgotten those boys and they have never thought once about my mother and me.

When I watched the brutal, fatal attack on Vichar Ratanapakdee, the 84 year-old, Thai grandfather, on social media, I saw my own grandfather in that black and white video footage. Ratanapakdee’s attack and the recent outbreak of others is sadly not a new phenomenon. They’re only now being caught on camera. The world is forced to see what’s been happening since the first Asian immigrants arrived in this country. In my own lifetime, my Lau Yeah had been assaulted in the park while waiting to play a pick-up game of tennis. He came home, bruised and bloodied. He didn’t remember his attackers’ faces, but he remembered their large hands, their strength, how they smelled, how rank their sweat and body odor. As a child, I smelled that sour, foreign odor, the smell of stress and fear on my grandfather, how his attackers had imprinted themselves on him.

But if I’m being truly honest with myself, the sharpest pang is to remember all the times I pushed my family away, dismissed their teachings and traditions, in order to live a life like the one I saw perfectly staged in the pages of the magazines of my youth. I didn’t realize that every time I hated my nose, I insulted my father. Every time I spoke unkind words about my own face, I spoke them to my mother as well. When I erased my own image from my own story, I turned my back on where I came from.

Every day a person of color suffers a thousand micro-aggressions, but the cruelest is the death by a thousand cuts we inflict upon ourselves. I had turned the source of my love into the source of my shame. In order to fight against inequality and injustice, prejudice and fear, we must lay down the knives we turn on ourselves

The weight of the majority can makes us feel small and unimportant. There is so much work to be done. To explode the model minority myth. To make ourselves heard. To hold others accountable for their actions. To speak up for our communities. To protect our most vulnerable, the elderly, immigrants, and children bullied in schools. To do the work we must do as the fastest growing demographic in the US, 20 million strong and rising. I can hear my Yaya’s voice, soft but strong, as cool and comforting as the scent of her soap and L’Air du Temps. “Be calm, Joycie. You will find a way.” I can see her wise old eyes and in them, I am beautiful.

Joyce Chang is working on a novel inspired by her family. Previously editor-in-chief of SELF Magazine, she's also worked at the New York Times, Marie Claire, Cosmopolitan, People, and Allure. You can follow her @joycechang and @thegetgo.