The Story The Scent
The Bottom Line

Welcome to Tynan Sinks’ fragrance column, Smells Like Trouble. As Byrdie’s resident fragrance connoisseur, Tynan shares the scents that linger in his mind, and nose, and clothes. He talks about fragrance in a way that goes deeper than just product: It’s about sensuality, memories, trends, emotions, et al. Fragrance is a lifestyle. Today, he discusses Boy Smell's bold new scent Hinoki Fantôme. Read on for his honest thoughts.

Boy Smells is full of surprises. You never really know what fragrance, collection, or component it's going to serve up next, but you can bet it's going to be lovely. At the very tail end of 2021—which was quite the year for fragrance— and, well, everything else— Boy Smells dropped what might be my favorite scent of the year.

Hinoki Fantôme marks Boy Smells' seventh fine fragrance following the debut of their five scents last spring and the release of Marble Fruit this past summer. I love the brand and its scents, but Hinoki Fantôme is next level.

I was lucky to get my hands on a small vial of the scent in early October, and this is one of the hardest secrets I have ever had to keep. I wanted it in everyone's hands immediately. As a beauty writer, fragrance is a huge part of my life, and I'm lucky that I get to smell many scents from all over the spectrum. Often, I'll find something I like; rarely, I'll discover something I really love, and most of the time, it's versions of stuff I've smelled before. But this? This is something different entirely.

I talked to the co-founder of Boy Smells, Matthew Herman, who told me the brand didn't want to simply create wearable versions of their best-selling candles, despite being highly requested by Boy Smells fans. Still, you might notice that Hinoki Fantôme shares a name with one of Boy Smells' best-selling candles. However, it isn't so much an exact recreation for the body, but more of an interpretation of the scent—and—my god, is it something.

Hinoki is a type of wood native to Japan that is highly prized and considered sacred. It has a woody, balsamic fragrance, with natural hints of spice and citrus. It has often been used to build holy places like temples and shrines, does not decay in the way that other woods do over time, and for this reason, it often symbolizes immortality.

Hinoki Fantôme opens with black pepper, olibanum (frankincense oil), tobacco leaves, and orris (a plant with an earthy, woody smell.) The middle gives you Cyprus, hinoki, fir balsam, and patchouli, and the base seals the deal with oakmoss, smoked leather, cypriol (a plant with a woody smell,) and cistus (a flower with a sweet, musky aroma.)

The whole scent is very woody and earthy, but there's something more to it. It's deep and dark in the way that many woody scents are, though there's something light and sweet about it, too, that pulls it in the opposite direction.

Do you know how Santal 33 is woody and musky, but on most people, there's just a hint of sweetness that peeks out throughout wear? Hinoki Fantôme takes that effect and amplifies it. It's not outright sweet, but all of the notes that have are subtly sweet teams up to give you this dewy, melony sweetness that hovers above your skin. The woodiness is the fragrance's physical body, but the sweetness is the aura around it is the soul. It's simultaneously both sides of the yin yang, light and dark, heavy and weightless. It's contradictory and complementary and so, so good.

It's fitting that Hinoki Fantôme is the seventh release from Boy Smells. The number seven is as lucky as it is spooky. The number seven is often associated with The Chariot, which symbolizes control, determination, strength, wisdom, and introspection in a tarot deck. Hinoki oil is often used in meditation to help ground you, promote calm, and make you mindful of each moment. This fragrance sums up all of that.

I am not exaggerating when I say that Hinoki Fantôme is the only fragrance I've been thinking about since I first smelled it a few months ago. I've been wearing it and smelling my wrists incessantly, and I'm smelling it as I write this review.

I acknowledge that I am lucky to smell almost any fragrance I choose, and even if a scent isn't really for me, I can recognize that it's for someone. Hinoki Fantôme is just something else entirely. It's dark; it's ethereal, it's mysterious, it's amazing. It was undoubtedly my favorite fragrance of 2021, and it's a top contender on my best of 2022 list—and we're just getting started. 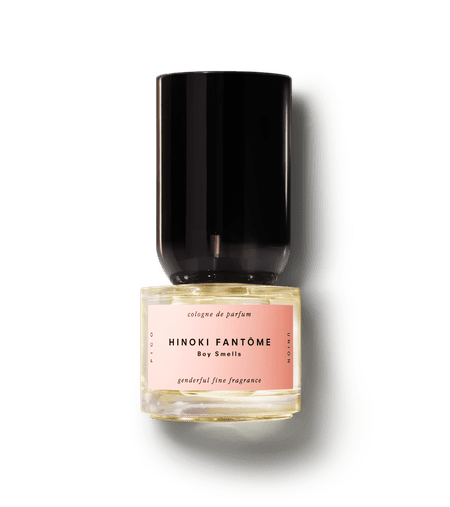