Hijabi-Friendly Spaces Should Be Normalized in Hair Salons 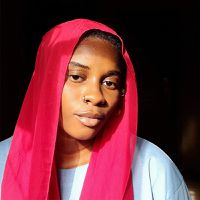 Foyin is a writer and journalist who covers fashion, beauty, health, and culture. She became a Byrdie contributor in 2022.

For many women, hair care is an integral part of their beauty routine. Hijab-wearing Muslim women should not be excluded from this conversation. Today, more women are embracing hijab, with high-profile individuals like model Halima Aden and congresswoman Ilhan Omar speaking openly about their experiences wearing hijab.

While increased representation in media and movements like World Hijab Day has helped lessen the misconceptions, many hijabis still have to deal with myths about their hair. Hijabis are often asked questions like: Do you not have hair? Do you wash or style your hair? Do you keep the hijab on in the shower? These assumptions have undoubtedly affected how hijabis are viewed and consequently ignored in the hair industry.

One of the most glaring examples of neglect is the lack of hijabi-friendly salons. Like other women, hijabis desire to visit salons for regular hair maintenance. However, this proves to be a struggle as hijabi-friendly salons are not quite the standard. For hijabis, this means salons with private spaces away from the gaze of non-mahrams (people of opposite sex that are permissible for a muslim woman or man to marry) or women-only salons.

Despite being a Muslim all my life, I didn't begin observing the hijab until a few months ago. For Muslim women, Islam dictates that the use of hijab involves covering our awrah (i.e. our entire body), excluding the face, hands, and arguably the feet, from non-mahrams. However, using a headscarf that covers the hair is often the starting point for Muslim women, including me. Once I made this choice, I became cautious about exposing my hair and began seeking hijabi-friendly hair salons. My unsuccessful search led me to unisex and one-room salons, forcing me to settle for uncomfortable arrangements because I had no other options. Many other hijabis face this struggle.

"I am always on the lookout for very small salons that don't have so many windows," says Ghanima Abdullah, a beauty consultant who works with The Right Hairstyles. "One time, I explained to the stylist my wishes. Although the area was closed off, people still came in to chat. I don't normally show my hair to women I'm unfamiliar with, so that was uncomfortable. Additionally, her male assistant kept barging in. I feel lucky I can do my hair, but I'm still looking for the right salon."

Khairat Bashorun, a hijabi from Lagos, Nigeria, experienced a similar incident. "There was an occasion where a client wanted her husband to come into the salon," she says. "The hairstylist explained that he cannot come in, but she disagreed, saying she was also a client and the man came in."

Having to settle for hair salons that are not hijabi-friendly means being constantly stuck in these situations without a choice. "I have a friend who went to get highlights," Abdullah shares. "She didn't explain fully to the salon about privacy issues. So, she sat there red as a beet while men came in and out."

When caught in situations like this, many of us make efforts to cover up, but they prove futile. "I've hidden behind the stylist," Abdullah says. "I've tried lifting the cape to cover my hair, but that didn't work. I've thought of ducking and pretending to look for something in my purse should a man re-enter the salon. These are anxious situations."

Many hijabis have given up on salon experiences altogether because of the uncertainties, choosing to take matters into their own hands. Khairat says she prefers to opt for at-home services and has invested in many hair tools to avoid the salon.  BeautyZana founder Deborah Scalone, who became Muslim 24 years ago, shares a similar sentiment. "Since wearing hijab, I have stopped going to regular hair salons because they cannot provide me with the privacy that I need nor do they understand the need for it," she says. "Nowadays, I style and cut my hair with a private Muslim woman hairstylist. It is more comfortable and relaxing in this environment."

However, measures like these shouldn't be the norm. And thankfully, some salon professionals are taking steps to make the industry more inclusive. Janet Clarke, the owner of Hair Bar London, created a private room in her salon following a slew of demands. "There is a private room within the salon for women who wear scarves, ladies that suffer from hair loss, etc.," Clarke explains. "Upon opening, the demand was made clear to me mainly because of the inquiries we would get. A lot of Muslim women would come for various beauty treatments, and they would ask for this service."

Several hijabi-friendly experiences salons have also opened up in the States. In Yasmeen Dahdoul's California salon, providing privacy and comfort is a top priority. She services one client at a time, making this an excellent option for hijabis. "Any environment where a person feels safe and validated will always have a positive impact on that community," she says. Salons like Le'Jemalik in Brooklyn and Shamso Hair Studio & Spa in Boston have also become known for their focus on hijab-wearing women.

Efforts like this must continue to ensure hijabis are acknowledged in the hair industry and our hair needs are addressed. With the number of hijab-wearing Muslim women continuing to increase, the demand for inclusive salon experiences will continue to grow as well. "Hijabi-friendly hair salons should become the norm," Khairat says. "It would make life a lot easier for me and [become] an experience to look forward to."

Where Is the Hijabi Representation in the Skincare Industry?