These New Acne Strips Are the Bigger, Better Version of Pimple Patches

Today is the day. A brand-new acne treatment has launched, and it combines a buzzy Korean-inspired skincare innovation with an easy-to-use, no-nonsense approach. It's called the Hero Cosmetics Mighty Patch Surface. Let's rewind, though, and offer up some background before we wax poetic about this new product, shall we?

You may recognize the Hero Cosmetics name from the brand's wildly popular pimple patches, known simply as Mighty Patch ($13). These are thin and flexible anti-acne stickers that adhere to a lone blemish, treating it with a powerful hydrocolloid formula that extracts impurities and speeds up healing. They also discourage you from picking the blemish and making it worse. In other words, they're genius and the perfect product to turn to when you're in a pinch—for example, when you have a big event in a couple of days and a giant blemish that's roughly the size of Mount Kilimanjaro has sprouted on your chin. (We've been there.)

The brand has released a couple different versions of the Mighty Patch since its initial release, including one that is almost undetectable on the skin, meaning you can wear it out and about without raising any acne-treatment suspicion. (This one is called the Mighty Patch Invisible+, $18) All of them, however, have been small enough to place on a single blemish. That's perfect for the occasional rogue breakout, but not so perfect when it comes to clusters of acne, which is a reality we all experience from time to time, much to our chagrin. 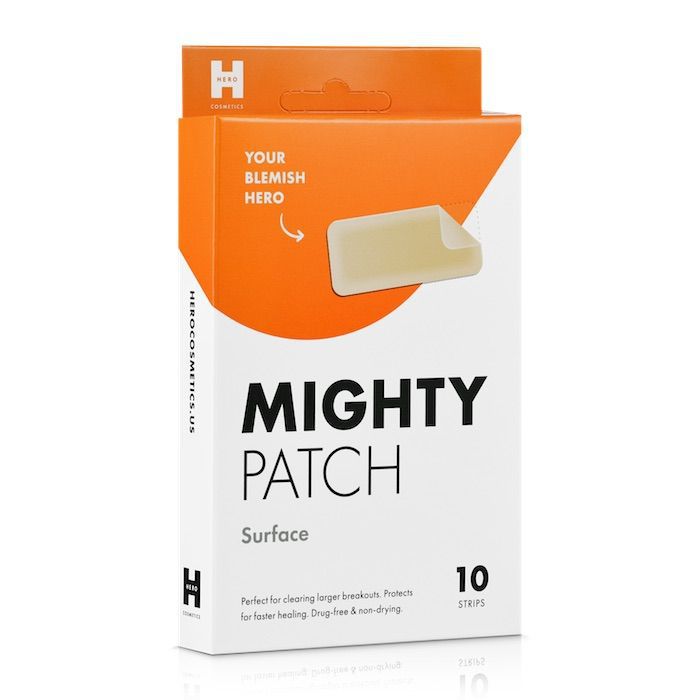 That's where the brand's newest product comes into play. The new Mighty Patch Surface is a larger anti-acne sticker that can be placed over an entire acneic area to treat multiple breakouts at once. It's roughly the size of a Band-Aid, transparent, and matte, so it works its magic in an incredibly low-key way. The best part is that it's not just for your face. You can place it on your chest, back, and shoulders—basically anywhere you struggle with body acne.

"Unfortunately, sometimes multiple pimples appear on your face, appearing in clusters in certain areas like the chin, cheeks, forehead or back. We made Mighty Patch Surface for those moments where your pimples decide that one isn't enough," the co-founder and CEO of Hero Cosmetics, Ju Rhyu, said in a press release. "Our customers have repeatedly asked us to make a bigger version for larger areas where they tend to break out."

Since there aren't too many targeted body acne treatments (mostly anti-acne body washes and lotions), this fills a missing gap in the skincare marketplace. To get a box of your own Mighty Patch Surface stickers, visit the Hero Cosmetics website.

I Have Acne-Prone Skin, and This One Ingredient Always Soothes My Flare-Ups