This Weighted Razor Gave Me a Dry Shave So Good, It Feels Like I Waxed

No time for a shower? No problem.

I could have lived my entire life not knowing how shaving with a razor should actually work. After first shaving with a pink plastic razor in middle school, I was resigned to a lifetime of mild razor burn, toilet paper-covered cuts, and instant stubble. Occasionally, like so many of us do, I'd steal boyfriends' razors for a closer shave or pick a men's razor up for myself. But despite the undeniably better shave, they can be unwieldy and clearly are not designed for my body. In a world of ever-optimizing consumer goods, the lack of truly quality razors still feels like a huge gap in the market. Now, that spot is reserved for Hanni.

My new Hanni razor is pink—like the razors of my youth—but that's about where the similarities begin and end. Designed to be the be-all-end-all in women's shaving, Hanni goes where other body razors have been unable to.

After watching a woman get a straight razor facial shave, the idea for a superior women's razor came to her during a business trip to Japan. Tessler got one herself and, amazed at how smooth her skin looked and the ease with which skincare products absorbed, "fell [into] a straight razor rabbit hole." She was determined to find something comparable, but the products available weren't quite right. Tessler wound up taking bits of inspiration from different razors and says that "adding really thoughtful, sort of modern design touches make it as convenient and functional as possible for the modern woman."

The sturdy metal Weighted Razor ($38) is preciously pastel, yes, (among other colors) but with a screw-bottom that opens the stainless steel razor's head, where the blade is held. To load in one of the wafer-thin blades, turn the bottom so the top opens (almost like a stadium roof), set one inside, and close it back up.

According to Tessler, less is more when it comes to a close shave. The single-blade Hanni razors—all stamped with the Hanni logo and housed in adorably lilliputian Hanni envelopes—are superior to those multi-blades you often see touted in commercials. Traditional razors have layers of plastic and metal designed to go over your skin at any direction or angle. They lift the hair follicle up and over the surface of your skin to shave it, which can cause ingrown hairs. You actually avoid this process and pesky red bumps with a single blade.

The Hanni blade is straight and sharp for a smooth shave that doesn't drag or irritate. In fact, the weighted design means no pressure is needed to shave with Hanni, letting the razor's heft do the work for you. Actual hair removal aside, though, it's the many thoughtful design touches that truly elevate the razor: an extra-long handle for hard-to-reach spots like ankles, finger indents for grip, and even a head that's measured to reflect the average width and shape of underarms, according to the brand.

I've shaved six times since receiving my Hanni razor last week, which is the most I've ever shaved my legs in a month, and I now consider myself an expert on Hanni use. Alongside the razor, Hanni also introduced their Shave Pillow ($24), a solid shaving cream-type stick that promises to let you dry shave anywhere with zero irritation. A shave without water? Sign me up.

Shave Pillow is made with glycerin, meaning it hydrates and seals in existing moisture. Oh, and it smells vaguely of Christmas with warm notes of cinnamon—an unexpected delight I'm still not over. Over the years, I've tried a few "dry shave" creams supposedly safe for skin only to experience awful irritation. But that's not the case here. Not only is the shave so close it looks like hair never existed, but my skin felt super hydrated thanks to Shave Pillow. It actually felt like I had shaved with shaving cream and then covered my legs with moisturizer. The shave was so close, it looked like I got waxed.

In the shower, the razor is just as good and the dolphin-skin feeling it gave me is addictive. I even went to town on my super-fine thigh hair for the first time since high school, just because I was having so much fun. Part of what makes the experience easy is that the weighted razor body applies pressure for you; all you have to do is lazily guide it up your leg. Only once did I forget this, pressing too hard on my ankle and giving myself a small but annoying cut. The design and directions are very intuitive, but it can be difficult to undo 15 years of plastic razor muscle memory. At the rate I'm suddenly shaving, though, it shouldn't take too much longer. 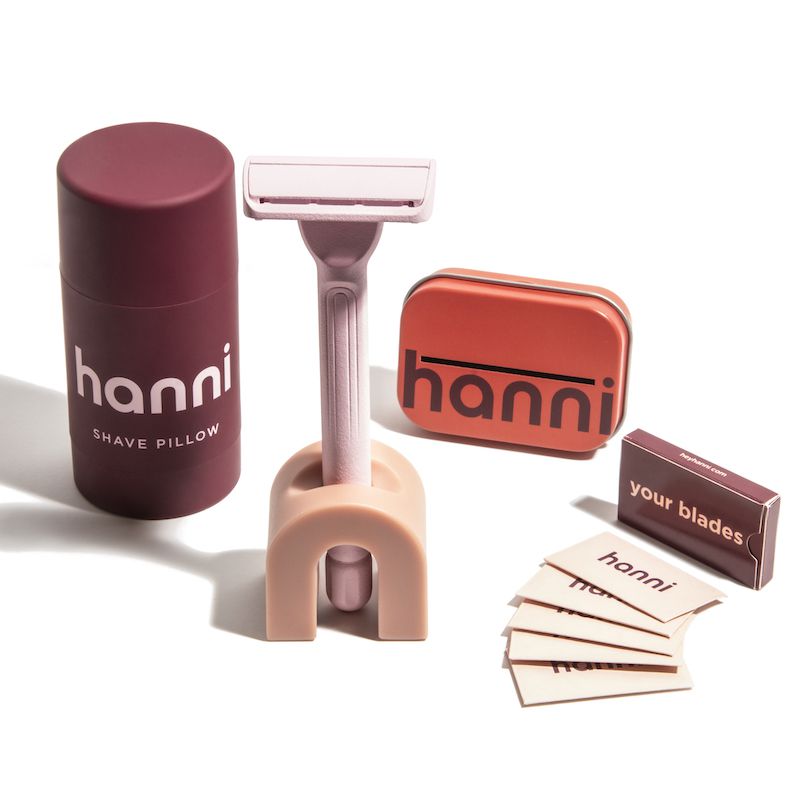 And of course, you can't mention the transition from plastic razors without discussing how harsh the single-use plastic is on the environment—something Tessler had at the forefront of her mind while developing the Hanni line. Tessler, and by extension Hanni, are convinced there is a better solution for the earth and for consumers. "I think if we can get women to understand how much better of a shave it is and also do something good for the planet and also end up spending less money, we can start a movement."

Hanni is now available at heyhanni.com

12 Shaving Tips to Prevent Ingrown Hairs
Article Sources
Byrdie takes every opportunity to use high-quality sources, including peer-reviewed studies, to support the facts within our articles. Read our editorial guidelines to learn more about how we keep our content accurate, reliable and trustworthy.