I Went to a Hammam Spa—Here's What It's Like

It turns out the cure for a bone-chilling blizzard is to remove all your clothes, save for a disposable paper thong.

File this under one of the lessons I learned during a February trip to Paris, along with "museum opening hours are optional during inclement weather" and "gluten-free croissants are shockingly delicious." I may or may not have come to all three of these conclusions over the course of a single morning, when a blanket of snow foiled my plans to see some of my favorite art in the city but thankfully made no impact on the underground hammam spa, aka Turkish bath, where I had made a post-museum appointment. (The aforementioned vegan-friendly baked good kept me warm as I trudged through the slushy streets.)

Read on for more about my hammam experience.

Karima Lasfar is the owner of O'Kari, a luxury hammam on the periphery of Paris's trendy Le Marais district.

What Is a Hammam Spa?

A hammam is a public steam room, often offering massage and exfoliation, in which people can come together to relax and bathe. Hammams often contain a series of rooms employing dry and damp heat, showers, soaps, and salts.

"The steam comes from hot water and we add eucalyptus oil to achieve an atmosphere conducive to well-being," explains Karima Lasfar, owner of O'Kari, a luxury hammam on the periphery of Paris's trendy Le Marais district. "The steam will open the pores of the skin and cause dead skin to flake off. The steam also increases circulation, ridding the body of toxins and helping with issues like cellulite."

Benefits of a Hammam Spa

• Relaxes both mind and body

Thanks to the use of steam, scrubs, and massage that are so often part of the experience, a trip to the hammam can lead to a considerable increase in blood flow and therefore stimulate the senses. Being that it is a spa, it is also incredibly relaxing.

What to Expect at a Hammam Spa

The cold dampness that had cocooned me for the better part of three days seemed to dissolve as soon as I stepped through the nondescript front door of O'Kari. I'd be spending the next few hours getting the full Turkish spa experience, from a full-body scrub-down to quality time in the steam room. And as is customary, I'd be completely naked the entire time.

Naturally, like any chronically traumatized American raised on a society-enforced diet of double standards and not-so-subliminal female-body shaming, I had been overanalyzing the nudity part since before I even booked the appointment—which is, in fact, one of the reasons I made it part of my itinerary in the first place. Hammam visits also happen to be one of the most quintessential wellness experiences Paris has to offer; thanks to a considerable Turkish population, spending a few hours getting your skin steamed, buffed, and oiled to perfection at these baths is an immensely popular excursion. A new-to-me cultural experience that also promised to take me out of my comfort zone and rescue my winter-averse skin? Done, done, and done.

As I undressed, I remembered that this actually wasn't my first brush with France's indifference to nudity. I thought back to a summer spent on the southern coast when I was 17—my friends and I giggling as we removed our bikini tops on the beach, only to cover ourselves up again 10 minutes later, the initial thrill giving way to discomfort. At the time, I had no idea that this fleeting insecurity would soon give way to a host of severe body image issues. It's a trajectory that, in my opinion, sums up what it's like to come of age as a young woman in the United States: to negotiate these warring ideas of prudishness and coveting the perfect body. In other words, we can't win.

These days, I'm largely at peace with my body. But as my colleague Hallie so eloquently describes, the nature of recovery is that it rarely—if ever—feels "complete." The real difficulty, I've found, is learning to simply exist in my body without constantly examining the pieces, something that was habitual for so many years. And that's why I still instinctively scan for anxieties in potentially vulnerable situations—like, say, when I'm offered a paper thong and instructed to otherwise strip down in the basement of a Parisian spa. So I surprised myself when I came up empty at O'Kari, gamely handing my robe to a spa attendant before strolling into the crowded steam room.

In my experience, the chief difference between the European approach to nudity and the U.S.'s MO of neurotic modesty isn't sexuality but indifference. Nudity isn't taboo because our bodies and sex aren't seen that way. Imagine removing self-consciousness from the equation entirely. That's empowering. And that is exactly what occurred to me as the steam permeated every fold and crevice: I didn't feel like I was on display because I wasn't. I was just there and so were all these other women. And my goodness—it felt so good to just not give a fuck.

This was the point at which I wondered if I had ever truly felt relaxed before this moment. The irony is that on paper, the hammam spa experience is not necessarily for the faint of heart: My agenda would include a traditional gommage, which essentially involves someone scrubbing off the outer layers of my skin. (This is about as tranquil as it sounds.) But first, in order to prep my skin for said removal, an attendant entered the steam room with a bowl of black soap and proceeded to slather it everywhere. This soap is kind of like a thick oily paste, and the steam helps it sink deeply into the skin for optimal moisture, dislodging dead cells in the process. (For those looking for an at-home alternative, I love paring Kahina's Beldi Soap with a cheap exfoliating glove in the shower.) 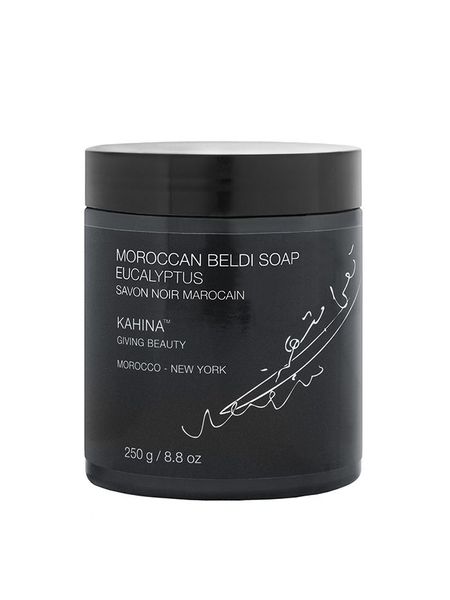 The rest of my time at O'Kari unfolded like a prolonged dream sequence. After the black soap coating, my body had absorbed a bit more in the steam room, I was led to an area with several stone massage "beds" and instructed to sit and lie in various positions as an attendant scrubbed every inch of my body so aggressively I could feel sheets of my own skin rinse away as she hosed me down afterward.

As I write about it, it seems harsh or clinical—being turned over and over on a stone slab while the outer layers of my body were effectively sloughed off. But it was heavenly, and the fact that I was quite literally shedding my skin felt like a too-perfect metaphor for the entire experience. If I hadn't been high on eucalyptus fumes and life in general, I probably would have laughed aloud at the corniness of it.

The attendant lathered my hair up with sweet almond oil before directing me back to the steam room. After soaking for a few minutes in the adjoining pool with a glass of peppermint tea in hand, I spent the remainder of my time at O'Kari in a private room for a massage: a glorious head-to-toe rubdown with earthy-scented oils.

I don't even remember getting dressed or saying my goodbyes—just stumbling out onto the snowy streets again, feeling dizzy with warmth even though just moments before, I had been stripped completely bare.