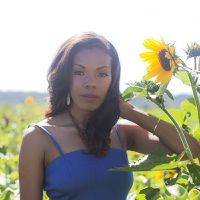 Sierra Leone Starks
Sierra has worked in journalism since 2013. Along with writing for Byrdie, she currently contributes to publications including Marie Claire, Allure, Medium, and other news outlets.
Byrdie's Editorial Guidelines

Hair salons and churches are still two of the most segregated spaces in America. I’ve been hearing that sentiment a lot lately. In this moment of American reckoning, with racial bias, racial injustice, and white privilege under a microscope, online conversations have shifted to expose industries where racism and discrimination run rampant. The consensus: This reckoning we’re in must extend to those safe, white spaces.

We’ll save tackling white evangelicalism for another day, but it’s important to note the segregation happening in hair salons is a product of the abolishment of slavery and the establishment of the Jim Crow era. Hair maintenance and upkeep were included in the centuries-long period in which white people benefitted from free, Black labor, says Jonathan Square, a history professor at Harvard whose work centers around Afro-diasporic fashion and art. “A lot of enslavers depended on their enslaved people to style and fashion them and do their hair,” says Square.

The turn of the century saw hair salons emerge as bonafide business ventures, and hairstylists were seen as professionals. With that authentication, however, came the imposition of Eurocentric beauty standards and segregation in the industry. “Among white, mainstream society, there was a hierarchy,” said Square. “People with certain phenotypes, people of European descent, people with straight hair were placed higher than people of African descent.”

Black women were forced to straighten and manipulate their hair and emulate those styles to avoid facing professional and social costs.

The must-have hairstyles marking that time period—the Gibson Girl, the pompadour, Marcel Waves—are all named after white people. Black women were forced to straighten and manipulate their hair and emulate those styles to avoid facing professional and social costs. Thus began the emergence of a parallel of industries, says Square—beauty salons that serviced those of European descent and salons that serviced people of African descent.

Fast forward to more than a century later and not much has changed. As a Black woman, I can’t just walk into the closest hair salon, the newest blow dry bar, or the trendiest spa for service. I'm aware that asking these salons for a sew-in, a silk press or a relaxer touch-up is asking to be met with confusion. I cringe every time I call a new salon to book an appointment and have to inquire, “Do you have a stylist who specializes in ethnic hair?" (The answer is “no” more often than not).

As a Black woman, I can’t just walk into the closest hair salon, the newest blow dry bar, or the trendiest spa for service.

That’s because when white hair set the standard for beauty, it also set the standard for beauty education, says Amber Curry, who has worn the hat of an educator and a stylist during her seven years in the industry. “We’re still working off of foundations that are antiquated,” explained Curry, mentioning powerhouse hair schools, like The Aveda Institute, Paul Mitchell, and The Sassoon Academy. “We should have the same amount of curriculum for Black hair and textured hair that we have for European hair. But we don’t.”

The message it’s sending is that Black hair is not important. And furthermore, the Black people who grow that hair aren’t important either. Black stylists have felt an obligation to learn to style all hair, from Type 1 to Type 4, and have been held to that standard in the beauty industry when that same expectation doesn’t seem to apply to their white peers. This was emphasized by Marquetta Breslin on a recent panel hosted by the Professional Beauty Association that addressed the racial inequalities in the industry. “In order for me to approach this industry, the beauty industry, and be well-diverse, that required me to go to a school where I was going to learn predominantly white hair,” said Breslin, who’s been a licensed cosmetologist for more than 16 years. “That was one of the things I did to more qualify myself so that I could be more appealing.”

Black stylists have felt an obligation to learn to style all hair, from Type 1 to Type 4, and have been held to that standard in the beauty industry when that same expectation doesn’t seem to apply to their white peers.

Both Breslin and Curry say many of their white peers who work in predominately white salons don’t have that same breadth and knowledge. The texture of Black hair presents a challenge many white stylists don’t know or don’t care to learn. “If you can’t [style all hair types], you’re not competing at a level of mastery,” says Curry. “I don’t care if you’ve been doing hair for 20 years. You’re just doing what’s easy and what works best for you.”

African-Americans have never been hesitant to spend a considerable amount of money on their hair. After all, our hair is a substantial part of our identity. And by not expanding their knowledge to include all hair types, stylists are also missing out on business and new revenue, says Erin Walter, brand manager for PBA. Walter says as a leading agency for the beauty industry, PBA’s focus for the foreseeable future is to keep conversations and industry support related to diversity and inclusion at the fore.

There is still a long way to go to integrate Black women into an industry that wasn’t created with them in mind. But the reality is that excluding those Black women from beauty spaces in the name of comfort and privilege is not only wrong, it’s racist.