Grief (And Manicures) in the Time of Corona 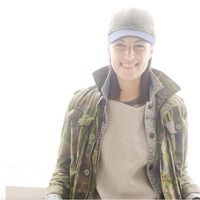 When I was about 10 years-old, I began using my allowance to buy nail polish and all the tools I needed for an at-home manicure. In my sparkly purple Caboodle, I organized the bottles by color, and found a home for the clippers, cotton balls, and a quick-dry top coat. At least once a week I'd sit on my twin bed and paint my nails to the mix-tape soundtrack of Mariah Carey, Ace of Base, and Janet Jackson. It was my thing.

The following summer my grandparents took me to Italy to spend eight weeks with my extended family. No parents, no siblings, just me and them. I schlepped my Caboodle across the Atlantic Ocean and kept my weekly ritual going, but instead of sitting on my twin bed, I sat in my zia’s backyard at a table right outside the kitchen door under a grapevine. And the soundtrack wasn’t homemade mix tapes, but rather the banging of pots and pans and the sizzle of oil as my nonna made cotolette di pollo e patate fritte, the only meal I would eat as a picky pre-teen. Whenever I was bored or noticed a chip that needed fixing, that table under the grapevine would transform into a nail salon, and eventually I started doing her nails, too.

As I got older, into my teens and early 20s, our at-home manicures got an upgrade. Every Sunday my nonna and I would slowly walk to the local nail salon, her holding her cane and me holding her arm. We would open the door and be greeted with smiles, the women working there running over to help us, hanging our coats, finding a safe place to store her cane, and guiding her into a comfortable seat. As soon as she sat down she would ask me to bring her color options from the wall of polish lined up like a rainbow. Every week I would return with a few bottles, but she always picked the same one: Watermelon by Essie. It’s a bright pink-red that captured her spirit perfectly. I would always encourage her to branch out and try a different shade, but it was a hard sell. Sometimes she would indulge me with a dark red or a mauve, but sure enough the following week her nails would be Watermelon again.

In my late 20s, my nonna developed Alzeihmer's disease and could no longer go to the nail salon, but our Sunday date remained. I would visit her apartment and do her nails myself, armed with the same tools that were once in my Caboodle to make the experience as close to the real thing as I could. I massaged her hands with cream, and used the little wooden stick to perfect the edges by wrapping it in a torn piece of cotton and dipping it in remover. While I filed her nails, my sister would comb and style her hair. We called ourselves Sorelle Salon (Sisters Salon) and she loved it. In those days, even though she didn’t stray far from her apartment, she still wanted to look her best.

I used to call it self-care, and it was, but it was really so much more than that. It was a way for my non-assimilated, non-English-speaking nonna and I to bond.

By the time I was in my early 30s her condition had declined so much that she didn’t always recognize me. I was so sad and distraught about her loss of brain function, that I had a hard time looking her in the eyes. The manicures didn’t stop, though. In fact, our ritual took on an even greater meaning for me. Focusing on her hands helped me to cope with her disease while we were together. So, every week I studied them. She still wore her wedding ring even though my grandfather had passed away 14 years earlier. It was a small single diamond in a silver setting, unique in that the diamond slid back and forth, and she often played with it subconsciously. And on her other hand was a ring that featured the birthstones of each of her five grandchildren: blue sapphire, aquamarine, emerald, garnet, and topaz. After finishing her manicure I would sometimes give myself one, too, even though by that point I was often going to the nail salon alone. Looking back, our hands were all I had left of our relationship and on her "bad days"—the days she didn’t know who I was—I clung to our ritual with an iron (manicured) fist.

Three weeks before my 37th birthday, two days before Christmas, and three months before the global pandemic hit, my nonna passed away. On March 13, 2020 life came to a screeching halt, and so did my weekly ritual. I quit my nails cold turkey. My new ritual was simple: When they got to be longer than the tip of my finger I'd cut them. For a while I told myself this was for practical reasons, since my hands were in water all the time washing dishes, cleaning my toddlers face, disinfecting surfaces, and cooking three meals a day. But as we all settled into life in lockdown, and the internet was flooded with at-home beauty tips, I had no interest. As businesses began opening up and salons implemented protocols to keep their customers safe, I opted out. And after 13 months, I still can’t bring myself to do it. For the first time since I was 10, I have no desire to do my nails.

It’s taken a global pandemic and an entire year of naked nails to realize what the ritual of getting a manicure really means to me. I used to call it self-care, and it was, but it was really so much more than that. It was a way for my non-assimilated, non-English-speaking nonna and I to bond. It was our thing. Doing our nails together was more than a beauty ritual, it was a way to bridge the multi-generational gap between us. And now I can’t look at a bottle of nail polish without thinking of her. Although Alzheimer's changed everything about her (and has clouded a lot of my later memories), her hands always remained the same from when I was a little girl. They were soft and warm. They held a small espresso cup with ease. And they always had a fresh coat of Watermelon polish.

After a Year Without Makeup, I May Never Go Back