Waterproof mascara is great in theory: Once on, you can run a marathon in the rain and nary a droplet of inky black formula will stray from your lashes. But come removal time, it's Fort Knox, deflecting any cleanser that dare make its way in. For this reason, I've sworn off waterproof formulas (I even opted for regular mascara the day of my wedding) in fear of having to tug at my lashes and damage what brittle, thin flutters I have. Granted, I threw in the towel quickly and simply haven't yet found the best means of removal. But when Glossier, the beauty Messiah, recently revealed that it was launching a waterproof makeup remover (the sister to Milky Jelly, Milky Oil, $12), I, its faithful prophet, denounced my aversion.

The launch came at an opportune time, just as L'Oréal's Unlimited Waterproof Mascara ($11), landed on my desk—fate in all its cosmetic glory. The tube claims that it resists smudging and flaking for up to 24 hours, which was the perfect litmus test for Glossier's Milky Oil Waterproof Makeup Remover.

Compared with my past experiences with removing waterproof mascara, Glossier's Milky Oil Waterproof Makeup Remover was a much more enjoyable experience.

About the brand: Glossier was founded in 2014, with the belief that beauty should be about having fun and embracing yourself. 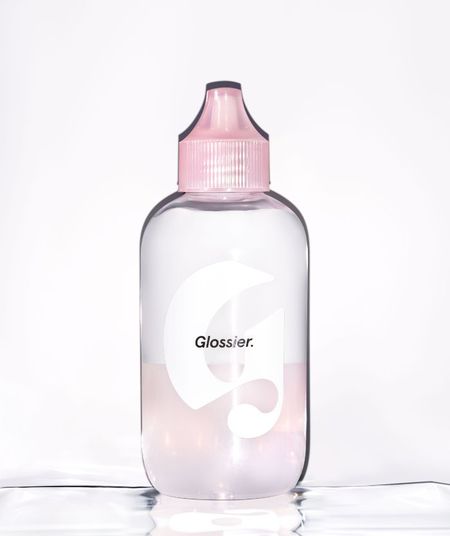 About My Skin: Reactive

My skin is very reactive (I have dermatographia and general sensitivity), so it's likely that I'm in the minority, but if your skin is also touchy, you may want to do a little patch test first on your inner forearm. After applying my usual four to five coats of mascara (what can I say? I like a lengthy, slightly spidery look) and confirming that the formula lasted all day long without so much as the tiniest smear, it was time to wash up for the evening.

Keeping it in the family, I grabbed a Glossier cotton pad, shook the bottle of Milky Oil as instructed, and soaked the pad with the solution. I then pressed the pad onto my lashes—also as the bottle directed me to—and released. On the cotton sat all of my eyeshadow and liner (both of which are not waterproof) and a bit of mascara, but the majority of it remained on my lashes. I went back in with the pad longer this time with a slightly back and forth movement to encourage the product to release, yet still, plenty of mascara was holding on for dear life. I then grabbed another pad, soaked it once again, and repeated.

It's oil-based (as the name suggests), which initially turned me off, but I wasn't left with greasy residue after all was said and done, and my lids and under eyes felt softer and smoother afterward—a nice plus. It's a weightless mix of oil and water on your skin. It also doesn't make a mess when applying due to the squeezable bottle.

It's oil-based (as the name suggests), which initially turned me off, but I wasn't left with greasy residue after all was said and done, and my lids and under eyes felt softer and smoother afterward—a nice plus.

I love that there's castor oil in the solution, a lash conditioner that's also been suggested by some to help promote hair growth. What's more, it's got other potentially nourishing hydrators like panthenol, PPG-26-Buteth-26, and glycerin. Though despite many positive factors on the ingredient list, I experienced some irritation.

After some time and a little elbow grease, all mascara was accounted for. On the other eye, I decided to hold down the pad even longer (about 30 seconds) before gently wiggling my lashes. To save pads, I re-soaked the pad in use and continued my hold-and-wiggle routine. Finally, my lashes were completely bare (and, to my delight, soft!). It took a few tries to remove all of the waterproof mascara, but instantly removed all of my other makeup.

The Value: Worth the price

If you're in the market for a waterproof makeup remover, this $12 bottle is worth the purchase. While removing all makeup, it also leaves skin smooth and soft due to the pro-vitamin B and comfrey root extract ingredients. Instead of a frustrating process, it's seamless and simple. Compared to other makeup removers on the market, this one also comes at a fair price.

Our Verdict: Give it a try

All this to say, when it came down to it, I really was happy with how well the mascara dissolved (albeit with a little extra effort than my impatient self would appreciate) and would definitely give Milky Oil another shot, especially on non-waterproof mascara which, I'm assuming, would take less time, perfect for nights when I'd rather wipe my makeup off quickly than do a whole wash-and-rinse routine. And, as you'd expect, it looks really great on my vanity.

I Wore Only Glossier Makeup for a Week—Here Are My Unfiltered Thoughts
Article Sources
Byrdie takes every opportunity to use high-quality sources, including peer-reviewed studies, to support the facts within our articles. Read our editorial guidelines to learn more about how we keep our content accurate, reliable and trustworthy.
Featured Video