Glossier Just Launched a Deodorant—So, I Tried It

It's not as random as you think.

Whether you're up on the biggest beauty trends or can't tell an eyeshadow stick from a lip crayon, chances are you probably use some variation of deodorant on your underarms. Although it's still up for debate on whether antiperspirant ingredients (like aluminum) are carcinogenic, there has been a massive shift in the beauty and wellness spaces that geared people towards using antiperspirant-free deodorants.

Unfortunately, the art of the best natural deodorant is a hard one to perfect. Most on the market either aren't strong enough to mask odors for a long time, leaving you a stinky mess, or cause irritation to sensitive skin. However, Glossier's brand-new Deodorant (yes, you read that right) just might be the solution. 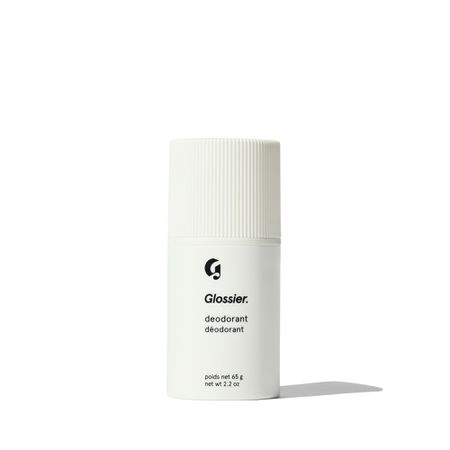 Glossier began as a brand that aimed to shake up outdated language and marketing surrounding beauty, and paved the way for a more inclusive and fun approach to makeup. Its "skin first, makeup second" approach is evident in its cult-favorite products like Balm Dotcom, Milky Jelly Cleanser, and Stretch Concealer, which work to enhance the skin instead of masking it.

Still, your head may be swaying into a quizzical tilt at the mention of a deodorant launch. As it turns out, Deodorant was inspired by Glossier's very own team, who went through countless trials and errors while looking for aluminum-free deodorants to wear themselves. "Since 2016, we've tested and written stories on 65+ deodorants (we even spent some time swiping facial toners on our underarms)," says Emily Trillaud, Director, Packaging & Product Development at Glossier. "After countless attempts to find the best deodorant and having struggled to find one that delivered optimal efficacy without sacrificing gentleness, we took the challenge upon ourselves to formulate an effective deodorant with all skin types in mind."

Many deodorants on the market contain ingredients like baking soda, acid, or water, which can keep the skin dry for extended amounts of time but can wreak havoc on the skin's pH levels and over-dry the skin to the point of irritation.

Glossier Deodorant is aluminum-free and instead relies on ingredients like potato starch to absorb moisture throughout the day, and magnesium hydroxide, which also absorbs sweat as it helps the skin maintain a healthy pH level. Glossier has introduced the idea of "pit care," and wanted to make something that would actually nourish your armpits while you wear it. Elderberry extract and coconut oil are vital players in Deodorant, which moisturize the skin's surface so that underarms can feel sweat-free without an over-drying chalky residue.

Deodorant comes in four scents (one of which might already be in your Eau de Parfum collection), which include:

Here's the thing: unless I'm in a Pilates class or running for a train, I've never been a person who deals with excess sweat, which led me to favor deodorants over antiperspirants for years (before it was cool). Still, I do deal with B.O.—I'm human, after all—which has led me to try almost every deodorant on the market. I've gone the natural route, which made me smell pretty horrible, and I've also gone the acid route, which seemed to work for me but often left my sensitive skin feeling overly dry and looking beet-red. My main woes with most deodorants were that they either had a chalky texture that over-dried my skin, left me smelling like I hadn't showered mere hours after application, or irritated my skin to the point where it was painful to touch and bright red on sight.

Glossier's Deodorant seems to have answered all my prayers in my quest for the perfect deodorant. Unlike other grainy formulas on the market, Deodorant glides on smooth and melts on my skin upon contact, meaning it doesn't tug at my delicate underarm area during application. In addition, it leaves my underarms feeling moisturized but not moist—it has a dry oil-like texture that adds just the right amount of hydration to keep my skin happy while banishing any sweat that may happen as I run around town. Finally, contrary to the other aluminum-free deodorants I've tried, this formula actually keeps my pits smelling fresh throughout the day, whether I'm at home working or at the gym working out.

This formula contains practically none of the ingredients that most aluminum-free deodorants contain. Still, Deodorant's effects are powerful, which is why I'm placing it front and center in my daily routine.

Glossier Deodorant is available at glossier.com for $22 or $18 for refills.