Glossier wants you to wash your face—like really wash your face. After launching the iconic Milky Jelly Cleanser ($18) back in 2016, the skincare first beauty brand waited five years before debuting a second face wash. Today, Glossier finally released the Cleanser Concentrate ($20)—an exfoliating cleanser packed with antioxidants that we can honestly say was well worth the wait.

Unlike many of Glossier’s other products, which are famously user-friendly, the Cleanser Concentrate requires a little extra work to reap the full benefits. It's designed to be used in conjunction with #The60SecondRule, a simple cleansing method that helps to activate the ingredients inside the product. For more on the new cleanser and #The60SecondRule, we reached out to Glossier's Senior Director of Product Marketing & Development, Chenaya Devine-Milbourne, and esthetician Nayamka Roberts-Smith. Here’s what they had to say about the latest addition to the Glossier family. 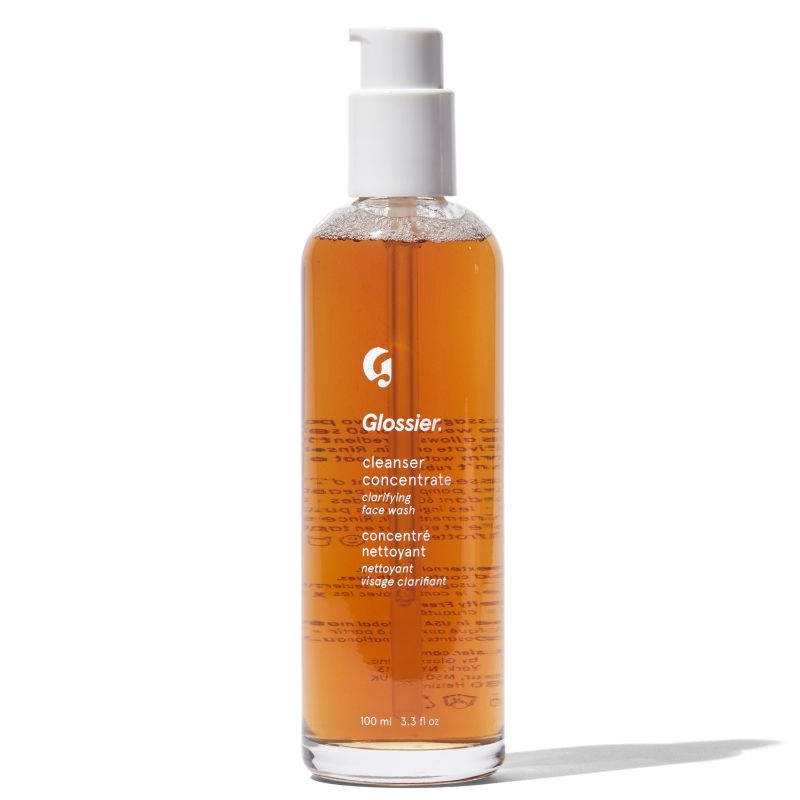 The 13 Glossier Products Every Editor Uses on Repeat

"We actually always knew there would be a second hero cleanser for Glossier," she says. Back in 2015, the brand asked the Glossier community to dream up their ideal face wash. The responses they received were split—some people wanted a gentle, makeup-removing cleanser (hence the creation of Milky Jelly), while others craved a deep, pore-level clean. “So for us, Cleanser Concentrate was always meant to be an addition (not a replacement) to Milky Jelly."

To create an exfoliating cleanser that was "both deeply cleansing and kind to skin,” the team spent time exploring a variety of different physical and chemical raw materials. Devine-Milbourne says they were really inspired by the "regenerative nature of plants,” which explains the combination of green ingredients that ended up in the finished product.

"In Cleanser Concentrate, the grapes are the star of the show,” she says. The formula includes both grape ferment and grape extract, along with lactic acid, malic acid, and niacinamide. These powerhouse ingredients work together to exfoliate, resurface, and clarify for smooth, radiant skin. To balance out the active blend, Devine-Milbourne explains, they added ingredients like soothing chamomile flower water and antioxidant-packed calendula and passion fruit extracts that “help maintain skin’s moisture balance for a deep clean that isn’t drying.”

For the silky lather, they used amino acid surfactants, a plant-derived alternative to sulfates. "They also win major bonus points for creating an undetectable film that keeps the formula’s key ingredients on the skin, instead of just rinsing down the drain,” she says, “so you actually get all of their benefits with every 60-second cleanse."

The cleanser was designed with all skin types in mind, but since it is an exfoliant, Devine-Milbourne notes that users should be careful not to overdo it. "For those with no skin concerns, oily, or combination skin, we recommend 1-2 times a day," she says. "If you have dry skin, we recommend rotating Cleanser Concentrate into your nightly routine just a few times a week.”

As for her own routine? “I have combination skin and I love to use Milky Jelly Cleanser in the morning and Cleanser Concentrate at night—if I’m wearing makeup during the day, I’ll do a double cleanse routine using both!"

To learn more about the #The60SecondRule, we turned to the creator of the technique, esthetician Nayamka Roberts-Smith. She explains that the method entails dedicating a full minute to really work your cleanser into your skin, instead of rinsing it off quickly.

Why is spending that extra minute washing your face so crucial? "60 seconds allows the cleanser to get to work," she explains. "It allows time for your sebum to soften, and for the makeup and SPF to get broken down to be washed away." Also, she notes, it gives you time to focus on those "often neglected areas of the face, like the hairline, nose, and chin."

How to Wash Your Face: The 10 Commandments of Cleansing

To figure out where the product fits into your current routine, Roberts-Smith says you need to really consider your skin type and the rest of the products you're using. "Glossier’s Cleanser Concentrate is the perfect gentle exfoliator, but if you’re unsure of how to introduce it into your routine, it’s always a good idea to take it slow, starting with twice a week and going from there," she explains.

"Daily use is amazing if you have no other exfoliants in your routine, but if you do, I’d recommend using this cleanser on your off-days. I personally love it for photoshoot prep, so my skin is super soft and smooth for makeup application."

If you're a fan of double cleansing, you'll be pleased to learn that the product also works as a second cleanser. "Using Cleanser Concentrate after a nice oil cleanse gives the skin a heavenly softness—I was shook the first time I tested it," says Roberts-Smith. "To really get the best out of this cleanser, removing makeup with a balm or even Glossier’s Milky Jelly Cleanser would be a good idea."

Like many Glossier fans, I stocked up on bottles of the Milk Jelly cleanser, braving the lines of the former SoHo flagship whenever I ran out. As far as cleansers go, it was right up my alley; it cleaned my face completely without stripping or drying. For the most part, that’s all I normally ask of my cleansers.

I tend to leave the heavy lifting and active ingredients to my various serums, toners, and masks because cleanser just gets washed off, right? As an avid follower of Nayamka Roberts-Smith, I had heard of and attempted to implement #The60SecondRule in my routine previously. Those 60 seconds, however, became more like 30 to 45 seconds before I got bored and rinsed my face.

The first thing that stands out about the Cleanser Concentrate is the glass bottle. It's sustainable, chic, and best kept out of the shower since my soapy hands would very likely drop it. To avoid a disaster, I decided to wash my face pre-shower, which allowed me more time to focus on the process. And while I had hesitations about #The60SecondRule previously, after trying the Cleanser Concentrate, I officially converted into a believer.

As you apply the product to your skin, the unscented cleanser works into a slightly foamy lather that removes dirt, oil, and makeup without leaving that dreaded stripped feeling behind. Committing to a 60-second cleanse really does make a difference—instead of just gliding my hands around my face, I can focus on the areas I normally skip.

The first time I used the cleanser, I experienced some slight sensitivity around my nose, which I suspect was the result of a recently done peel. I waited two to three days before trying the cleanser again and didn't have any issues the second time.

Not only did it leave my skin feeling super soft, but it also got rid of some of the clogged pores around my face. I followed up with my usual hydrating toners and serums but skipped any exfoliants since the cleanser had accomplished its purpose. I'll definitely work the Cleanser Concentrate into my routine a few times each week, and on days when I use my regular cleanser, I'll still stick to the #The60secondrule regardless. As I said, I'm a believer.