Consider it the spiky bun 2.0. 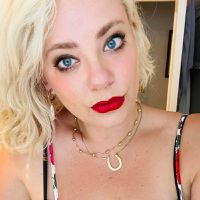 There are some Y2K looks that I never thought would come back around—hairstyles that I believed were the height of chic in my early-to-mid-teens, like butterfly clip twists, accordion headbands (thanks, Bella Hadid) and the spiky updo. But just as a wander through Target’s Wild Fable aisles can send me reeling back into my youth, so too can TikTok and its obsession with bringing back throwback hair trends.

The latest comeback kid is the twisted updo, now known as the “funnel cake bun.” In my youth, this was an extremely popular prom night look for the exceedingly glamorous high school girls, who paired it with their strapless Jessica McClintock gowns and matching gloves. Now, it’s being paired with vintage Levi’s and oversize blazers for a 2022 twist (pun intended).

The funnel cake bun is no longer relegated to the winding paths of memory lane. Gigi Hadid and Devon Lee Carlson have been spotted in the twisted, loop-de-loop updo and the style has found footing—where else—on TikTok.

It’s really no surprise the funnel cake bun is back, given our obsession with all things from the new millennium. One day it’s a music video and MTV VMA red carpet standby, the next it’s a trend favored by supermodels and influencers. It’s all part of the circle of life… and hair trends.

There are a few key aspects of the funnel cake bun, notably its bevy of small twists reminiscent of the county fair pastry treat. You can tuck the ends in or let them fly free, but if you’re sticking to the old-school rules, leave them out!

TikTok user Nikita Joy dubbed the look the funnel cake bun in an easy-to-follow tutorial video. According to Joy, all you need to get the look is hairspray, two hair ties, hair oil and “a ton of bobby pins… more than you think you’re going to need.”

In her video, Joy starts with a sleek, tight ponytail as a base, then separates the ponytail into three sections and splits those sections into quadrants. Joy spritzes each quadrant with hairspray and lets the hair twist into itself, then pins it to the base of her hair all around the original ponytail base in a clockwise direction. Pretty easy, right? Pin any “stragglers,” as Joy calls them, into a shape of your liking and you’re basically transformed into the lead of a ‘90s Shakespeare rom-com retelling.

The look sparked joy for more than a few commenters, including one who shared, “I had that exact hair style for prom in 2001. Things really do come back around.” Joy’s video has over 75,000 impressions, and while #funnelcakebun is still primarily a space for users to share their powdered sugar pastries, we have a feeling this style is only going to get more popular as the Y2K craze continues.

“This look takes me back and I love it!” says Heggy Gonzalez, editorial stylist and creative director at Inspire Greatness Aveda Institutes. “It can be so versatile; you can use smaller or larger [twisted] pieces to really diversify the look.”

To channel trendsetters like Gigi and Devon, Gonzalez recommends prepping the hair a bit. If you have straight hair, adding a little wave or curl will give the left-out ends a bit of extra texture. “Secure the ends with a small elastic ponytail holder and then twist,” says Gonzalez. “It gives you something to place the bobby pin through and helps secure it better.”

If you like the funnel cake bun look in theory but it feels a bit too Y2K for you, you can make a few tweaks to the style to keep it in 2022, not 2002. “You can go one of two ways,” advises Gonzalez. “Try uber sleek with a center part, really snatch that ponytail beforehand and don’t leave those ends out, or two, soften the look with some loose pieces in front, larger twisted pieces and some slight volume to the ponytail.”

Did you just chop a bob but are craving some funnel cake regardless? Gonzalez recommends using a ponytail extension to fake length. Get to twisting and pinning and soon enough you’ll be ready for the prom… or, you know, Monday.