"It made me question if my friends ever saw my whole self, color included." 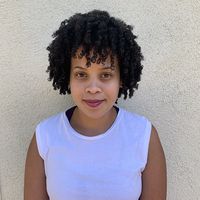 I’ve been fortunate to have a solid group of core girlfriends that I’ve had since elementary school. We’ve seen each other through middle school, high school, college and graduate school. We’ve consoled each other through each breakup or financial storm. We exercise together and educate each other on every fad diet. We take annual trips, find joy in weird dancing, and laugh over the silliest things until we cry. Prior to this summer, I felt like I could tell them anything and that we understood each other on every level. But things changed drastically on May 25th with the murder of George Floyd.

In my circle of seven girlfriends—in which I am one of two Black girls—half of them went silent the first two weeks following the horrendous viral killing of yet another unarmed Black man. Floyd joined the long list of countless Black men and women wrongfully killed by the police. As I was experiencing another level of trauma, my white friends were going about life as if one wasn’t tragically lost. They were posting stories of their latest quarantine purchase, how much they loved working from home, and photos of the new pets.

It was difficult to not feel resentment seeing them spam my feed with trivial posts while me and the rest of the Black community was in pain. When I voiced my disappointment, sadness and sheer frustration for their lack of concern and failure to reach out, it was met with “validated” reasoning: I didn’t know it was so bad! I’ve been in my own bubble over here, and just found out. I haven’t been able to watch the video, it’s too terrible. I’ve been so busy with work and moving that I didn’t have a chance to reach out till now. After days of messaging back and forth, it was clear that they weren’t listening or learning—they were just amplifying their excuses, something I saw as a defense mechanism out of fear of showing their privilege. This hurt me deeply because these were the people that I loved and believed would “know better.”

The comments and conversations took a toll on our friendships, but more importantly on my mental and emotional well-being. “When a person doesn’t hold sacred your identity and your race, or fail to acknowledge the validity of your personhood and humanity, it becomes really tough to see how they add value,” says Dr. Akua K. Boateng, PhD.

As I struggled to bring the friendships back to what they were, I was met with more and more conversations filled with micro-aggressions and performative allyship techniques. And I’m not alone—I have tons of friends (and friends of friends) of color who have lost friendships to racism this year. It’s made many of us question our decision making, wondering if we’ve been blind to years of their inability to recognize the racial inequities that marginalized groups face each and everyday. More specifically, it made me question if my friends ever saw my whole self, color included.

It made me question if my friends ever saw my whole self, color included.

Still, I tried to work things out, which became a very confusing process to navigate as a Black woman. I found myself going back on my word in confrontational chatter, telling myself there was a chance I blew things out of proportion. “Unfortunately, society enforces Black and Brown people to minimize our experiences as if there’s something wrong with them, as if we are overreacting,” Dr. Boateng says.
Which of course, isn't true—it’s important to realize that your feelings are valid, no matter how much someone might convince you otherwise.

Some activists believe that as people of color, it’s our duty to continue the hard work and conversations to get more supporters. In a sense, I believe this too, but there is a fundamental difference between talking to someone who values human life and is receptive to logic and reasoning and talking to someone who denies the lived experience of Black people.

After months of trying with facts, personal stories, and an open heart, I’m now at an impasse with these friendships and have decided to part ways. Friendships can end in many different forms, some sudden and some gradual. For me, it first started with privately establishing firm boundaries and releasing the wide access I gave these friends. As psychologist Dr. Sanam Hafeez believes, “Not everything requires a conversation. Some things are just better off letting go.” A lot of the time planning out the words you’ll say brings just as much, if not more, anxiety. For me, it brought more peace and less stress allowing the relationship to follow my terms, whether I voiced that or not.

In my process, it became increasingly clear to me that you cannot have a true, proper relationship with someone when you differ greatly on moral and ethical grounds. This, of course, was not an easy realization to come to after two decades of friendship. I had to ask myself if I was ready to walk away, or be willing to keep trying. The emotional process is ongoing. Some days, I still feel anger, resentment and a deep longing to still be friends.

It’s far too easy to judge a relationship when you’re on the outside. We see a friend getting cheated on or verbally abused, and we insert our opinion as if it’s law. It takes courage to exit a friendship that doesn’t sit well with you—one where your worth isn’t taken into consideration. But it’s a harder pill to swallow when you continue friendships with someone who is content with systems that demote Black people and elevate white supremacy. As American writer Katherine Fugate so perfectly put it, “What we allow will continue. What continues can escalate.” From my personal experience, removing myself has been impactful for my mental health and overall healing during these unprecedented times. It’s brought me peace and deepened my integrity to stand for what I believe and denounce things that don’t serve me.

So, Black people, I invite you to find peace separating yourself from these friendships. It is not your obligation to stay in a relationship until you change someone's mind or convert friends into allies. I encourage you to follow Dr. Boateng advice: "Give yourself permission to not be loyal to things or people that harm you."

Give yourself permission to not be loyal to things or people that harm you.

I want to be clear, I do not speak as an authority for all Black people, but simply as a Black female who has experienced a lot of ups and downs in lifelong friendships this year. I believe it’s time to give ourselves permission to separate and cling to our own values and morals, not out of superiority, but out of hope for a future where racism isn’t tolerated.

I’ve learned, and continue to learn, as a token Black friend to so many, I don’t have to be a social justice educator along with being a friend. I’ve decided to prioritize myself and my peace of mind above all else. In a friendship, racism matters. You can’t possibly agree to disagree that Black lives matter. And if that ends a friendship, it’s time to be okay with that.

6 Black Beauty Founders on What Allyship Means to Them