How to Perform a Foot Detox at Home

The word "detox" has come to take on a variety of meanings. Colloquially speaking, it's a catch-all term for any tool, process, or diet that can help rid the body of unwanted substances—like alcohol, refined sugars, and bloat (think sweating out a hangover in the sauna). It isn't uncommon to see celebrities promoting "detox teas" in your Instagram feed or to stumble upon a recipe for a "detox smoothie" on Pinterest. But speaking scientifically, detoxification is the process of removing dangerous chemicals from the body, a process that's performed by the liver and kidneys. So a real detox happens (at least in the eyes of the medical community) if your liver and/or kidneys aren't functioning properly, when a physician would prescribe a course of treatment to supplement your organs' natural processes and rid the body of toxins.

With that being said, that doesn't mean that starting the day with your favorite detox smoothie is all for naught. While it might not rid the body of toxins (as is implied in the name), that doesn't mean it doesn't help you feel lighter and more energized throughout the morning. The general consensus among physicians and nutritionists is that if a "detox" modality doesn't negatively impact your health (and it makes you feel good), then there's typically no harm in continuing that routine. The latest detox modality to fall into this category is a foot detox, which, in theory, is meant to help eliminate bodily toxins via the bottom of the feet through an ionic foot bath, pad, foot mask, or soak. While doctors and researchers agree that the purported benefits of foot detoxes are unproven, they also agree that foot detoxing isn't dangerous, and the praise from users is enough to pique our interest. Read on for everything there is to know about foot detoxes, including what studies say about the practice and how to perform your own foot detox at home.

What Is a Foot Detox?

A foot detox is a process whereby the user tries to remove toxins from the body by pulling particles from the blood through the soles of the feet. The process is unproven, but it's also generally considered safe to try by the medical community, as long as you don't have an existing health condition.

There are a variety of ways to perform a foot detox at home, from investing in an ionic device to DIY-ing your own soaks and masks. Below are the four most common methods, all of which can be performed at home. Of these four methods, ionic foot baths are the most popular, as well as the most criticized.

Whether you choose to invest in a soaking basin or to DIY your own mask, a foot detox intends to eliminate bodily toxins through the soles of the feet. Here's how the most popular method—ionic foot baths—claims to operate.

"A foot detox (or ionic detox, or detoxification foot bath) is a therapy that uses electrolysis of water to generate ions in a basin of water with your feet submerged," says Neill Moroney, the co-owner and president of A Major Difference (AMD). AMD is the company behind one of the highest-selling (and TikTok-viral) ionic foot baths, the IonCleanse. 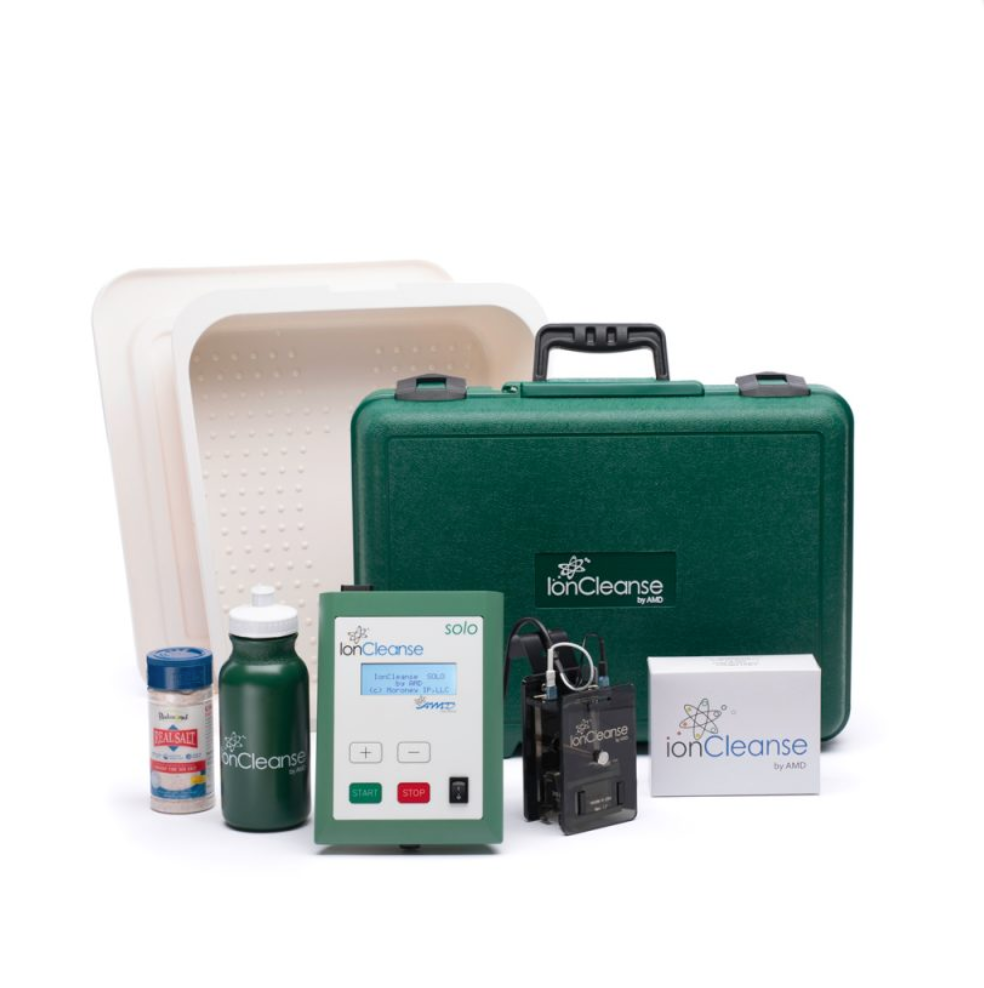 Moroney continues, "When you turn on the IonCleanse by AMD, the machine generates a flow of clean, filtered current into the warm, tap water (there is typically also a small amount of salt added to the water for conductivity). This current 1) helps to stimulate a relaxation response in the body, and 2) ionizes the water. The ions generated by the current in the water draw oppositely charged toxicants out from the body and into the water. Additionally, we have found that this process allows the body to better detox even after the session is over. So, for example, you will see higher levels of heavy metal excretion in the urine two to five days post-cleanse."

If you've seen the IonCleanse (or similar, competitor models) on TikTok or elsewhere, then you're probably familiar with some iteration of the following, albeit fairly alarming image:

"Visually, the water starts out clear and typically ends with a pretty disgusting assortment of colors, textures, and even sometimes smells," says Moroney. "This phenomenon is also our proverbial 'Achilles Heel' as the water will change color with or without feet. The skeptics point to that fact as their sole basis for debunking the technology. At AMD we do our best to discuss this with our customers before the purchase. We also point to our research to help build confidence in the efficacy of our system."

What Studies Say About Foot Detoxing

As far as ionic foot baths go, supporters of foot detoxes believe that the water changing color is a sign of toxins (like heavy metals) leaving the body through the feet. However, it's true what Moroney says—the water will change color even if you don't put your feet into the bath.

There has been very little research conducted around foot detoxing, so it's tough to make a be-all, end-all statement about whether or not they work. For example, a 2012 study "found no evidence to suggest that ionic foot baths help promote the elimination of toxic elements from the body through the feet, urine, or hair." The same study also states that the baths are also unlikely to cause any bodily harm, and are therefore safe to try (for most people).

Meanwhile, research conducted by AMD in 2008 claims to have found "sufficient data to demonstrate that clients using the IonCleanse by AMD had statistically significant reductions of toxic elements in their blood compared to those not using the IonCleanse by AMD." The "toxic elements" in reference included, on average, a 46 percent reduction in aluminum and a 24 percent reduction in cadmium. While the research is criticized due to a potential conflict of interest (AMD sells the very foot baths that were used in the study), the study was conducted by two qualified PhD- holders.

If you'd rather not invest in an ionic foot bath, you can try one of the other, more DIY-friendly modalities. Ahead, find our favorite masks and scrubs for softening feet, soothing cracked heels, and easing sore muscles. (Just remember that these won't actually "detox" your feet, since claims about this process are unproven.)

Chances are you already have a charcoal face mask hiding somewhere in your medicine cabinet. Activated charcoal has been used for decades to draw impurities out from the skin, and it's safe for use on your feet as well. Try performing the mask on the soles of your feet, scrubbing the mask away after it dries for a softening, exfoliating effect.

Just like bentonite clay has been used on the scalp for centuries, it's also a safe ingredient for foot detoxification. Combine a 1/2 cup of bentonite clay, six tablespoons of apple cider vinegar, and three tablespoons of water to create the perfect clay-textured mask. Leave it on the bottom of your feet until the mixture starts to dry and crack, then scrub it off.

You can add your favorite essential oils to any of these mixtures to customize the recipe to your needs. Lavender is recommended to enhance overall relaxation, while tea tree oil (and its natural anti-microbial properties) are recommended for purification.

For a soothing effect, try filling a large bowl (or your bathtub) with hot water and epsom salt. Epsom salt soaks are frequently recommended for sore muscles, which makes this a great option for tired, overworked feet.

While you can purchase foot detox pads online (with more advanced ingredients that are harder to get your hands on individually), they're also fairly easy to DIY. To create your own, you'll need to cut muslin cloth to fit the soles of your feet, then soak the cloth in one of the mixtures above. Leave your DIY mask on for about 20 minutes, then rinse away remaining residue.

The claims that supporters make about ionic foot baths (the most popular way to detox your feet) are unproven, but the devices also aren't dangerous. The general consensus among the scientific community is that you should consult your doctor if you have an existing health condition, but for the most part, it's safe for most people to practice foot detoxing regularly. The purported benefits of other, less expensive detox modalities (like DIY foot soaks and scrubs) are also unproven, but are also not dangerous. In fact, many users report feeling very relaxed after a session. Users also report a slew of other unproven benefits, like weight loss and relief from pain and illness.

If you're interested in seeing what all the fuss is about for yourself, rest assured that it's easy to perform a foot detox at home. (However, it's better to err on the safe side and consult your physician first.) Just bear the research behind this practice—again, none of the claims have been scientifically proven—in mind before you invest in a pricy machine.

[Ed. Note: Byrdie reached out to several practitioners on the efficacy of foot detoxes, but they declined to comment]