So I've Been Taking "Hangover Pills," and They Actually Work

My friends and I have a group text where we repeat the same conversation at least once a week. It starts around 12 p.m., usually on a Saturday or Sunday, and begins with one of us texting, “Everything hurts,” with others chiming in in agreement, mostly bemoaning how/why they ended up in their current state: Why is there a box of Artichoke pizza in my bed? Why’d I text [insert name of person she vowed she wouldn’t text] “Hi” at 3 a.m.? Am I okay?

If hangovers were measured by strength in numbers, our collective one would be of the Mount Everest variety. But lately, I’ve found myself absent from these conversations—not because I wasn’t part of the festivities the night before, but because nothing hurts, and I’m out living my life like I didn’t guzzle five tequila sodas while dancing to ’90s hip-hop the night before. This has garnered a lot of anger and disbelief from my friends (“You’re actually getting breakfast right now?!”), which is why I’ve decided it’s time to let the world in on my secret. You see, I’ve discovered something called Flyby, and it’s amazing.

A few months ago, I received a very professional-sounding email from someone named Eddie Huai on LinkedIn. He told me that he had created a supplement called Flyby that would make hangovers a thing of the past, and asked if I’d like to try it. I took a second to think about the risk of taking a pill offered by a stranger on the internet, did some research on his company, then politely declined. Just kidding—I said hell yes and shared my address immediately.

The initial product he sent me came in individual packets, which made them easy to slip into your bag but hard to remember to actually take. The thing is, in order for them to work, you have to take three of these (fairly large) pills before drinking, then three before bed. As you can see, there’s a lot of room for error in this process, and I found myself either two drinks in and suddenly remembering I hadn’t taken the pills before I started, or coming home and making ramen in my kitchen instead of taking the last three pills before bed. I gave up on Flyby for a while, and my hangovers raged on.

Weeks passed, and Huai let me know he had updated the formula and wanted to send me the new and improved pills. I responded very professionally with something along the lines of “SEND MORE PILLS!” and was pleasantly surprised to see that the new iteration of Flyby came in a classic plastic bottle, like dressed-up vitamins. Somehow, this made all the difference in my remembering to take the pills correctly.

The first time I took Flyby 2.0, I woke up the next morning blearily, waiting for the pounding headache to set in. Instead, I felt… nothing. Was it possible? Had this strange pill actually worked? I told my sunglasses-donning friends about it at brunch, and they seemed dubious. It was just one time—perhaps it was a lucky coincidence. Thus, I took it upon myself as my civic duty to test Flyby again. For science, you know.

As I downed my tequila soda(s) with abandon, I told everyone around me about my magical hangover pills, to which they smiled uncomfortably and asked if I was in line for the bathroom and, if not, could I please step aside. The next morning, I woke up fresh as a daisy. Well, maybe not a pristine daisy untouched by the elements. More like a daisy with maybe one or two petals missing, a daisy that’s maybe been through some stuff, but still looking presentable enough to bestow upon your third-grade crush.

Over the next few weeks, Flyby helped me be more productive on the weekends than I had in months. Suddenly, I was no longer bedridden on Saturdays with the blinds drawn, bemoaning the round of shots I’d bought for everyone the night before (well, my bank account still bemoaned—when someone finds a way to reverse the drunken charges you make on your credit card, hit me up). Instead, I was waking up with no pounding headache or nausea after nights of drinking, which opened up a world of possibilities for me (mostly involving eating my way through NYC). There was only one night out of many that I woke up feeling the slightest tinge of a hangover while taking Flyby.

As I started getting more and more reliant on Flyby and my friends started getting more and more annoyed that I was so chipper in the mornings, I realized it was time to investigate how exactly this magical pill actually works (yes, I realize I probably should have done this before taking a bunch of pills from the internet, but alas…) and reached out to Huai himself for explanation. According to Huai, he came up with the idea to create Flyby on a trip to Tokyo. There, he was introduced to a whole world of hangover cures and cites a drink that he and his friends would take before nights out that supposedly kept hangovers at bay. Surprisingly, it worked every time.

“I felt like I had stumbled upon something huge,” he wrote to me via email. Immediately after Tokyo, he started doing his research and found himself talking to a PhD in biomedical science and a leading U.S. manufacturer, which led him to the ingredient dihydromyricetin (DHM). It’s naturally found in the Japanese raisin tree and acts as the star ingredient in keeping your pounding headaches away. In a study done by UCLA, scientists found that DHM could sober up a rat immediately and rid it of major hangover symptoms, eventually concluding it could have the same effect in humans. 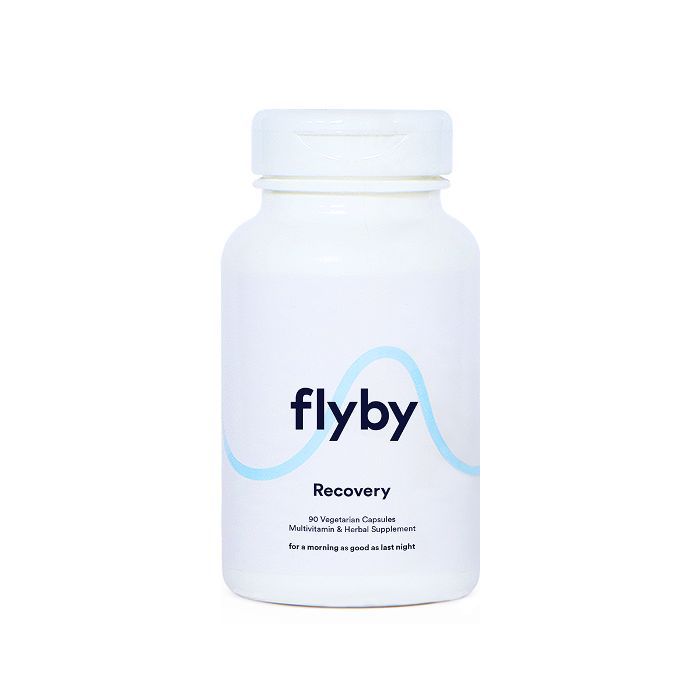 So, Huai made DHM the hero ingredient and created various versions, which he sent out for “testing”—aka a nonstop drinking spree with friends, family, and beta testers. The key ingredients other than DHM are milk thistle, prickly pear, and spirulina, all of which help with acetaldehyde buildup (the toxic byproduct of alcohol, which is supposedly 30 to 40 times more toxic than alcohol itself and is the cause of hangover symptoms), inflammation, nutrient depletion, and more.

“Fortunately, the results were overwhelmingly positive, and the product was working even better than I imagined,” he told me. “At that point, I was confident I had a solid product, so I decided to release the initial version of Flyby (which we updated in December 2017) to the market.” There are other DHM products out there (a quick browse on Amazon yields plenty), but Huai says that Flyby is different and a step above because of the method behind how the team extracts, purifies, and controls DHM’s efficacy. “We’ve run some tests against rats on various DHM blends, and our DHM was shown to be five times more effective,” he assured me.

So, the future is now: An anti-hangover pill exists, and it actually works. Now excuse me while I fix myself a drink—I’ve got things to do tomorrow.