written by
Beth Krietsch
Beth Krietsch is a freelance health and food writer with a Masters degree in Public Health Nutrition. She covers food and nutrition for Byrdie.
Byrdie's Editorial Guidelines
Beth Krietsch

The Benefits The Drawbacks Is it Safe to Use? So, Does it Work?
Inserting and Removing the Flex Menstrual Disc Having Sex With the Disc Working Out With the Disc The Takeaway

The menstrual products you use can play a big role in getting you through your period with a bit more ease. Everyone has their personal preference, from tampons to reusable period cups and more, but whenever we hear of something different, we love to take a closer look and see if it could be something that works for us. Today, we’re taking a look at the Flex Disc, which the company says not only collects period blood, but can reduce cramps. When we hear that something reduces cramps and period pain, we pretty much need to know more ASAP.  Keep reading to learn what we found out about the Flex disc, and to decide if it’s a product you might want to try. But remember, doctors know best, so you should always speak to your gynecologist if you have any questions or before trying any remedies for period pain.

What Is the Flex Menstrual Disc?

The Flex Disc is a single-use menstrual disc that is meant to simultaneously collect uterine blood and reduce period cramps. It's inserted similarly to a diaphragm and sits just beyond the vaginal canal.

Among the benefits listed on their site, the disc can be worn for up to 12 hours (including during activities), reduces cramps in up to 60 percent of people who use it, reduces irritation and dryness, and isn’t linked to toxic shock syndrome. 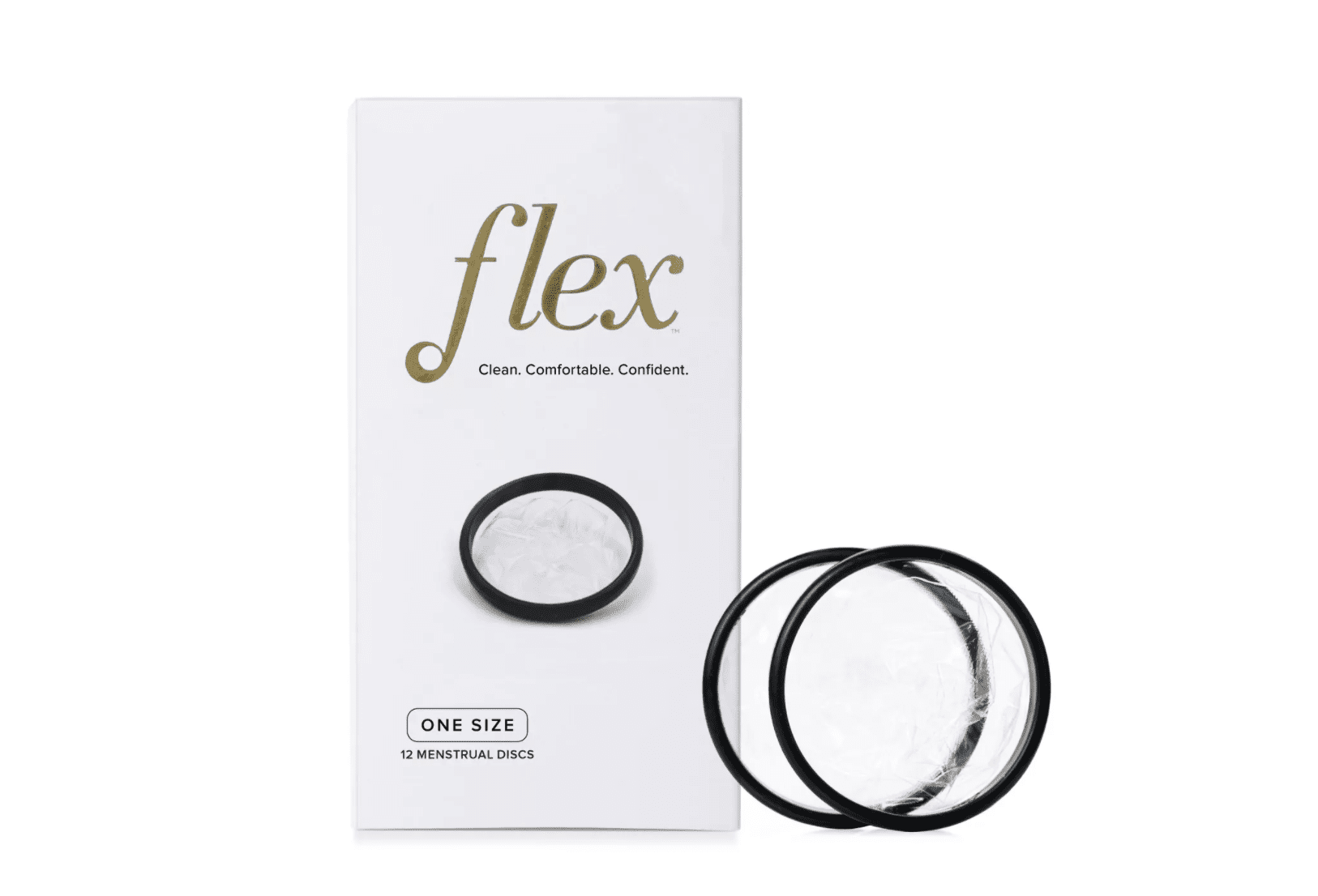 The Flex disc doesn’t have any major drawbacks, but Dr. Gersh outlined a few small ones you may want to consider.

Is it Safe to Use?

Basak says that the Flex disc can be used in most cases, and is often recommended by gynecologists for people with endometriosis, heavy cramps, chronic yeast infections, fibroids, and other conditions.

But there are a few instances where it may not be a good idea. Gersh says the disc shouldn’t be used by women with a double cervix, vaginal sputum, or history of toxic shock syndrome. She also wouldn’t recommend it for women who get frequent urinary tract infections (UTIs).

So, Does it Work?

Flex says its disc reduces period cramps for a couple of reasons. The first is that the disc is made of a medical-grade polymer that doesn’t have an inflammatory effect on the vagina or surrounding tissues, and “thus does not exacerbate the inflammatory effects of a woman’s period,” says Ally Basak, VP Brand Marketing at Flex.

The other reason, Basak says, is because of where the Flex disc sits in a woman’s body, which is at the top of the vaginal fornix, where the vagina is at its widest, compared to a tampon’s position in the low- to mid-portion of the vaginal canal. Basak says some of the cramping women experience is due to the tampon’s expansion with fluid and blood.

“The lower third of the vagina contains more sensitive nerves compared to the upper portion of the vagina—and Flex doesn't rub them like a tampon,” Basak says. “Many women who can feel the pressure of a tampon expanding in their lower vagina causing cramping, cannot feel Flex in the upper vagina due to the differences in innervation and shape of the respective products.”

The gynecologists we spoke to for this piece aren’t entirely convinced the Flex disc reduces cramps. “The origin of cramps is not when the flow goes into the vagina, it arises in the uterus, from prostaglandin release, and can get worse as the blood flows through the cervical opening, especially if large clots must pass through the cervix,” says Kim Langdon, a board-certified obstetrician and gynecologist with Medzino.

Gersh echoes that sentiment, saying that cramp alleviation doesn’t have much to do with the method that’s used to collect menstrual blood. But that doesn’t necessarily mean you shouldn’t use it, especially if it works for you. “If some women feel it helps reduce menstrual cramps, then it does help for them, but most likely the benefit is due to [the] placebo effect,” she says.

“It’s design is comparable to a diaphragm, a contraceptive device used by numerous women for decades, but uncommonly used since the advent of “modern” contraception,” says Felice Gersh, an OB/GYN and founder & director of the Integrative Medical Group of Irvine.

The disc is pretty simple to use. After washing your hands, all you need to do is pinch it in half and guide it into place behind your pubic bone (check out the full directions, here). After the disc has been in place for up to 12-hours, you can remove it by sliding your (clean!) finger under its front edge and pulling downwards. Then you can toss it in the trash, because it’s not reusable.

Both gynecologists we spoke with said that the Flex disc is safe to use, or at least as safe as other intravaginal menstrual products, like tampons and menstrual cups. “I would expect that toxic shock syndrome could still happen, as could alterations of the vaginal microbiome,” Gersh says.

Having Sex With the Disc

This may come as a surprise, but it’s fine to have sex while wearing the Flex disc. In fact, the company actually states on its website that the product lets you have mess-free period sex. Wondering how that’s possible? Basak explains to us that because menstrual discs sit at the vaginal fornix, they catch blood before it enters the vaginal canal, leaving the vaginal canal unobstructed during sex. She says most customers report that neither they nor their partner can feel the disc while they're having sex.

Working Out With the Disc

Athletes and gym-goers will be happy to know that the Flex disc is a go when it comes to workouts. “Many professional athletes, and weekend warriors, are our most passionate customers,” Basak tells Byrdie. But keep in mind that with many menstrual products, there’s always the chance of some leakage, whether you’re working out or not.

The Flex disc may or may not be so helpful in reducing period cramps (you’ll have to try it out to settle the debate on that one) but it’s still a decent option when it comes to feminine hygiene, especially if you’re looking for something different from a tampon or menstrual cup, or for a product that allows you to have mess-free sex while you’re on your period.