How I Found Community and Care in Vietnamese Hair Salons 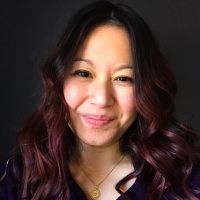 Thao Thai is a writer and editor with an MFA in creative writing and over two decades of experience.

This year, I returned to my hair salon for the first time since November 2019. The decor was completely revamped, with a grunge-retro vibe that felt slightly too cool for me. My stylist—a friendly, shag-haired redhead who I've seen off-and-on since my grad school days—peered at my ends. She's gracious, but I wondered if she noticed the wreckage I'd left after three years of at-home cuts. During the pandemic, I told myself, "It's just hair. It'll grow back." But of course, it wasn't just hair at all.

Like other People of Color, many Vietnamese women have a complicated relationship with hair. Joyful and exuberant at times, yet also edged with trauma. In some novels, especially those of a post-Vietnam-War era, you'll read descriptions of East Asian hair uncomfortably close to fetishization—long, silky, gleaming, blacker than night. The darkness of East Asian hair is treated as a metaphor for inscrutability, and in some cases, for seduction—picture a femme fatale striding across a room in a crimson dress. It's a look that, for some, has become a shorthand for Orientalism. Add bangs, and you might move into the territory of manga schoolgirls in short skirts. Cut your hair into a bob, and you might become relegated to matronly auntie status. One ex-boyfriend would tell—caution—me that he wouldn't find me as attractive with short hair. He said, "I'd feel like you were turning into your mom." For many East Asian American women who find themselves continually brushing against stereotypes, hair matters.

The women in my family are obsessed with hair. When they watch Korean dramas, they note the shine and shade of the actresses' locks. While visiting, if I sit still for too long in one place, my mother or aunt sits next to me with the barber's black comb they keep on the living room end table, running it through my hair. They've been known to drive an hour or more to visit their favorite Vietnamese stylists. These days, they cut each other's hair instead of making the trek. The heyday of the hair salon, like so many rituals from my childhood, is a thing of the past. And yet I remember it vividly.

Saturday mornings in Florida, my grandmother hauled me out of bed and pushed a frilly dress in my hands. She tightened my hair into two buns on each side of my head. The women in my family would emerge in dresses usually found in the back of their closet—the ones they couldn't wear at their weekday factory jobs. They emitted a fog of perfume—scents from Elizabeth Arden, Estee Lauder, and Clinique filled the room. Their hair was immaculate. Once I asked why they took so much time getting ready to go to a salon and got a dirty look in response. The implicit message: We do not give our second-best to our community.

We drove an hour to St. Petersburg, where there was a large Vietnamese American population. My grandfather and uncles dropped us off at the salon, then sped off to the cafes where they would drink bittersweet cà phê đá or smoke shops where they bought the forbidden cigarettes their wives hated. While the women in my family waited for their turn in the salon chairs, I sat nearby with a lychee-flavored soda bought from the grocery next door. As a child, my grandmother usually cut my hair on a kitchen chair in the backyard, never intending to waste money on a kid's cut. So, for years, I was a spectator at the Vietnamese salons.

I watched women shooing children out from underfoot, sometimes bribing them with individually wrapped fruit gummies. They would trade gossip and recipes, sometimes leaving out a crucial secret ingredient, because generosity knows some bounds. They complained about bosses, celebrated their kids' acceptance into elite colleges, and sometimes bemoaned husbands who did not treat them as the queens they were. When discussing their troubles, they hissed, "This would never happen in Vietnam."

In the background, Paris by Night, a Vietnamese variety show, played. Sometimes the stylists would sing along as they streaked dye into the hair. Usually, someone was reheating a plate of cơm tấm in the back, which made the salon smell heavenly. While waiting for the dye to set, a grandma sat placidly dipping her spring rolls into a plastic container of peanut sauce. These haircuts were a cheap price to pay for an afternoon in the company of women who shared your history—a luxury for my own family, living so far from their homeland.

These haircuts were a cheap price to pay for an afternoon in the company of women who shared your history—a luxury for my own family, living so far from their homeland.

While the stylists finished their hair, I flipped through fashion magazines like Vogue, Glamour, and InStyle. The usual cover celebrities were Christie Brinkley, Gwenyth Paltrow, Michelle Pfeiffer, and Sarah Michelle Gellar. If there was someone who looked like me—East Asian, not Vietnamese, because I did not hope for the specificity of that representation—they might appear in a cut-out silhouette on a street style page. It's disingenuous to say that I processed any of this at seven or eight. I don't think I saw the lack as one of cultural representation but as an internal lack. I wanted to look more like the people I saw in the magazines: cool, aloof, and indisputably glamorous.

So when I was allowed to perm my hair at the Vietnamese salon at the age of nine, I could not sleep the night before out of excitement. When we arrived, the stylist whisked me into a silver chair with a plastic cover that smacked against my thighs every time I moved and draped me with a thin plastic apron. It was unbearably hot that day, but I bit down any complaints, grateful to have this wedge into adulthood. The chemicals stung my scalp, and the heat of the overhead lamp meant for setting the curls felt like it was baking me alive. And yet, I stayed put and continued to page through my magazines. Two hours later, my hair was dried and sprayed within an inch of its life, reeking of chemicals. It was also four inches shorter due to the spring of the curl. The women in the salon gushed over me. "She looks like Mariah Carey!" they said. "So adult," my mom told me, almost wistfully, cupping the ends of my hair with her palm. If a fourth-grader could strut, I strutted.

Monday at school, I peeked out shyly behind my curtain of curls (now a little flat and fuzzy due to my inability to style it). I hoped for compliments, any brush of approval over how different I looked. Instead, a teacher gave me a sympathetic pat on the shoulder. "Too short, huh? It'll grow out, honey." She mistook my eagerness for shame, and somewhere along the way, I accepted that shame and clipped it to my experience of hair.

Throughout college, graduate school, and shitty first jobs, I spent way more money than I should have on hair. It was dyed every shade (from mahogany to violet), cut in bangs, shortened to pixie-length, waved, and straightened. I visited many stylists over the years, some of which were one-time affairs, while others became longer relationships that fizzled when I moved to another city.

But I've rarely been satisfied with my haircuts, despite the prowess of my stylists. It's limp and never seems to gather enough shape around my round face, unless I take an hour or more to wrestle it into waves. I once asked my friend, a beautiful Korean American woman with an effortless hairstyle she hadn't changed since high school, what her secret was. She said, slowly and patiently, "Well, you find an Asian hair stylist, of course."

I sought out Asian American hairstylists, who all did a great job, but I found none of the experiences compelling enough to repeat them. Most of the salons were the same: impeccably clean and gleaming with silver fixtures, yet cold and impersonal. No one talked to each other. The music was low and tinkly. I couldn't smell a whiff of anyone's lunch. Of course, I think most people want the sterility of a modern salon.

I realized that maybe it wasn't my hair or the haircuts that summoned such emptiness inside of me. I was missing the Vietnamese salons themselves. My mind jogged back to the cacophony of voices, the way all my senses lit on entering. What I felt—what the women in my family felt—when we opened those salon doors was hope. They were investing in themselves for a few hours, away from the demands of jobs, childrearing, and running households crowded with generations. Sure, it was just a haircut. But it was also an opportunity to be still and served for once. They could have gone to the local Supercuts and gotten a trim for a fraction of the price and hassle, but they chose to make that drive every few months anyway. Sometimes we will travel far to find community, even if the promise is fleeting.

I haven't found the same experience anywhere in the Midwestern town where I live now, which has a 6% Asian population, but I haven't stopped looking. And sometimes, the intimacy of the Vietnamese salons of my youth unexpectedly finds me.

Sometimes we will travel far to find community, even if the promise is fleeting.

Recently, my mom came to visit for a week. She tagged along when my six-year-old daughter got her hair cut to her shoulders, oohing and ahhing over the change in her baby face, suddenly lengthened and shaped by the new style. That afternoon, Mom asked if I would give her a trim, saying she didn't want to pay anyone to take a couple of inches off. I settled her in a chair in the backyard and got out a pair of kitchen shears. I snipped a little here and there. I was terrified of cutting too much off.

Soon, my daughter burst out of our side door to meet us in the yard. "What are you doing?" she asked. "Can I help?"

I told my daughter she could hold Grandma's hand. "Make sure it's even," my mom said. Her fingers itched to take the scissors herself, a gesture of stubborn self-reliance I recognized in myself.

I checked the ends again and again. Then, when we were all pleased, I brushed the strands from my mom's shirt. She stood, admiring herself with the hand mirror I brought out. Her other hand still held my daughter's tightly, the early morning sun shining on their new cuts—one shaded the color of a crow's wing and one the deep, warm hue of roasted chestnuts. My mother and my daughter twirled a little in the grass. Around us, driven by the gust of wind, hair clippings scattered. They edged past our ankles, into the rocky path near the patio, up around the low-hung birdhouse crammed with twigs, and beyond the fence separating us from the outside world.

A Deep Dive Into the Appropriation and Whitewashing of Asian Beauty