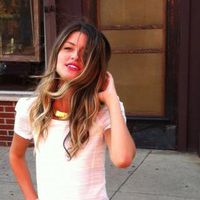 Alina Gonzalez is a beauty and fashion writer residing in Los Angeles.

Fergie is a woman we’ve long admired for her fearlessness on- and offstage—she just exudes confidence, sex appeal, and enviable amounts of cool-girl status. She seems like the kind of person who doesn’t care what the world thinks, and she stays true to herself and her vision, while having a really, really good time. Plus, she’s coined about as many pop-culture-famous phrases as Drake, what with “Fergalicious,” “lovely lady lumps,” and “workin’ on my fitness.” And of course, as some of us are Angelenos ourselves, we can’t help but love the California native for her impossibly catchy hit “L.A. Love.”

We caught up with the star at The London Hotel in West Hollywood, to discuss her latest Outspoken perfume launch with Avon (her third Avon fragrance, this one called Outspoken Fresh), and all things beauty.

Keep scrolling to read our interview with Fergie.

How and why did you choose the notes you did for your new fragrance with Avon?

Fergie: The top note is very sparkling citrus, and one of the top notes is a blood orange. My dad used to grow all kinds of fruits and vegetables in his backyard, but he would really want to get creative, so he would do things like blood orange trees. And I would feel really cool bringing them to school and kind of slicing them open because on the outside it looks like a regular orange, but then it’s this really cool purple inside. That’s kind of what this Outspoken fragrance is about. Doing something different and fresh. So the blood orange was a perfect top note for this. Then we kind of rounded it out with that creamy sandalwood, which was a nice way to make it luxurious. It’s more soothing.

So would you say your tastes have changed since then? Or do you still like the same sorts of scents?

Fergie: I mean I’ve evolved. I like different things now. I’ve really come to love fruity florals. They’re just so inviting and there’s so many different ways you can go with them. It’s really opened my eyes, this partnership with Avon. They’ve been so wonderful and knowledgeable and accepting of all of the ideas I bring to the table. And this is the first time in the series where Outspoken got some color. Because it started off very rock and roll boudoir, and a little bit darker but still fearless and bold. That turned into Outspoken Intense, which is about being onstage and fearless there. And now, with Fresh, for me it’s about fresh new ideas.

Fergie: It’s this part of my life where in the studio again, I’m creating videos, I’m creating visuals. So for me, like with the L.A. Love video, I was obsessed with color. Because I see things through my kid’s eyes, and he is just so attracted to color. All of the little cartoon songs that we watch, I love a lot of the animation. It’s kind of like trippy psychedelics and the colors burst out at you from the screen. I was completely inspired by that with "L.A. Love" for the L.A. Love bus in the video, and for this Fresh perfume.

What are your favorite hair products?

Fergie: Surprisingly for me, the best “hair product” is just to let my hair air-dry, and that keeps it healthy, you know, the less stuff I do with it. I’m a little more low-maintenance, being off tour. Except for today—I got my hair did.

But on tour, we would have to put it up in a ponytail super fast, and snatch it up from being down in extensions [in between songs onstage], so the best thing we used was olive oil. It’s crazy. Because it was cheap, we would just pour it on, slick grease it back, and then stick the whole long extension and all the rubber bands in, and so a lot of times we’d get right on the tour bus, and I would just wrap it up in a bun, throw a scarf on or a shower cap when I got in my bunk, and sleep in it—wash your hair the next day, and it’s like silk. But this doesn’t really work if you’re off tour, and you have a husband. You’re going to smell like a salad. So the new version of that is coconut oil. It’s a little bit thicker—you still have to wear a head scarf unless you want to wash your pillowcase every day.

What about your skincare routine?

What is your biggest beauty blunder?

Fergie: I dyed my hair in high school. We went to CVS—I think it was called “Sav-on” back then. And I sneak bought this hair dye, and I was blonde then. And you know my mom would take me to get highlights, which was special. But I secretly bought this hair dye, to go brunette. And it turned green. It was this ash, brassy green. I kept trying to rinse it and it kept getting greener and greener, and I told my mom in the morning, begged her to let me go to the salon, and she said absolutely not, you’re going to go the full week with green hair. It was like Frenchie from Grease.

And then you never dyed your hair again.

Do you have a beauty icon?

Fergie: I do, I have a couple. I have Brigitte Bardot, who I emulated on the cover of my album The Duchess. And Sophia Loren, who I got to work with in Nine. Both are masters of the extended black liquid liner, which obviously I am a fan of.

Fergie: It really depends where we're going. Usually I keep it casual with Josh. But I love to once in a while get dressed up. We just went to the Tom Ford show, and it's fun to get fancy every now and then. I love to do a pop of a red lip because it’s easy. It just pops it out and adds a little something special.

Do you have any weird beauty secrets?

Fergie: One of my eyebrows goes higher than the other one. I've been trying to grow them back from plucking and piercing them. So I brush one up, and then one down, to make them even! If I don't and they go out of place, it kind of looks like I'm giving the one-eyebrow.