The Scent The Notes
The Bottom Line

Welcome to Tynan Sinks' fragrance column, Smells Like Trouble. As Byrdie's resident fragrance connoisseur, Tynan shares the scents that linger in his mind, and nose, and clothes. He talks about fragrance in a way that goes deeper than just product: It's about sensuality, memories, trends, emotions, et al. Fragrance is a lifestyle. Today, he discusses Rihanna's bold new scent Fenty Eau De Parfum. Read on for his honest thoughts.

I always knew this was coming. Well, I didn’t know, but I *knew*, you know? After the massive and sustained success of Fenty Beauty, which gave birth to Fenty Skin, it was clear there was no stopping the Fenty empire. I can see it now. The year is 2031, I am sitting on my Fenty couch, in my Fenty apartment for which I pay my Fenty mortgage, having just received the second dose of my Fenty vaccine, which was, of course, free with my Fenty healthcare, as a proud citizen of The United States of Fenty.

Honestly, I thought the next phase of the Fenty expansion was going to be hair, and I do think that’s in the wings (I know nothing Rihanna do not sue me.) When I saw Fenty was dropping a mysterious new product, I was like yay Fenty Shampoo!

Then, I found out it was a fragrance? I was thrilled and very, very curious.

Rihanna has done perfumes before, of course. She released her first fragrance, Reb'l Fleur, in 2010, followed by a few flankers, then other scents like Riri and Rogue. They were all nice, but fell squarely into what we think of as "celebrity fragrances" today. No shade.

With the launch of Fenty Eau De Parfum, we are introduced the new generation of Rihanna’s fragrances, not under Fenty Beauty but the larger Fenty brand. This, if nothing else, is a larger indication of things to come. Fenty is just getting started.

Anyway, the scent. I really, truly did not know what to expect. I thought:

I am so happy to report Fenty Eau De Parfum is neither. To me, it feels innovative, a bit familiar, and pretty risky, in a very good way.

The scent is bold. I feel like bold scents are not the move right now—but, since Rihanna says they are, they are. I love it. It’s big, spicy, earthy, sweet, and warm; honestly it’s everything I love in fragrance, and I’m not just saying that because I love Rihanna. It makes itself known and it makes no apologies.

Fenty let us in on the notes in the scent, but not how it’s layered, meaning, top, heart, and base, which is fine. I can’t say for sure but to me, it feels like a linear scent, or a fragrance that isn’t built to evolve on the skin over time. The smell will stay consistent throughout.

The storytelling around this scent is great and really nails the concept, so shoutout the copywriter. Fenty says the fragrance is "inspired by distinct memories and places that Rihanna cherishes from throughout her life—Bridgetown, Barbados; Grasse, France; New York, New York; Paris, France; Los Angeles, California…" She’s a global girl! And she’s worked all of her favorite places into one perfume.

Fenty Eau De Parfum is brought to life by fruity notes like tangerine and blueberry, florals like magnolia, geranium, and Bulgarian rose, and earthy notes of patchouli and musk.

The notes come at you sort of individually and all at once. You can recognize them all on their own, but at the same time, each is inseparable from the others. You get the bright, juiciness of the tangerine, but also the deep blue sweetness of the blueberry.

The rose really shines here, but not in a typical rose way. This is one of those boozy takes on the classic flower that I love, which is accented very nicely by the patchouli. If you like scents that reimagine rose in very non-floral ways, like Decadence by Marc Jacobs or Chanel Coco Noir, you'll love this. The musk doesn’t pull focus here, but sort of works to blur it all together in a hazy, sexy late-summer magic.

Something notable in the fragrance is the absence of woods. No cedar or sandalwood to speak of (enough with sandalwood already), but Fenty Eau De Parfum doesn't lack texture or depth. It leaves you wanting nothing and takes absolutely everything it can from each note, not just the oil from the flowers but the petal, the root, the stem, not just the juice of the fruit but the pulp, the meat, the skin. 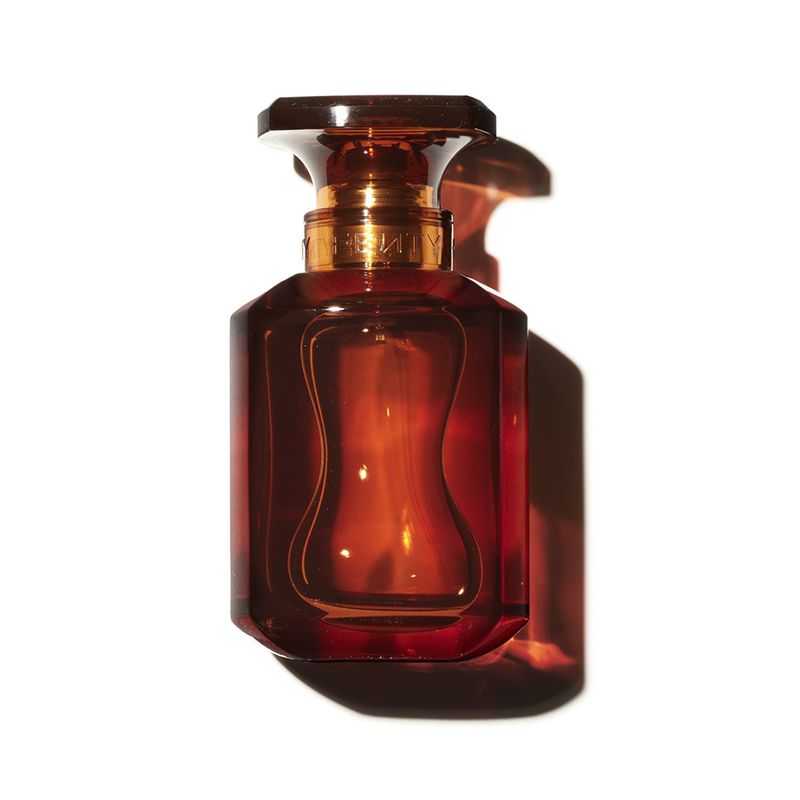 I know we are all dying to say we love every Fenty product but this? I really love it.

More than anything, it’s surprising. It’s not made to appeal to the masses, but it will, because, well, Rihanna. It feels LUXE. It smells and wears like an expensive Tom Ford or Bond No. 9. When I wear it, I feel like a young, jet setting heiress who’s running from her family with their own private plane, or a wealthy old woman with a bunch of dead husbands and even more secrets, who exclusively wears big black fur coats and sunglasses with red lenses.

More than anything, I feel like myself, with the reminder that I can be whoever I want. Rihanna is a chameleon who can shift trends, create discourse, and challenge us with a new idea that we can all get excited about, so what’s stopping the rest of us from doing the same?

Fenty Eau de Parfum, $120, will be available August 10 on FentyBeauty.com.