The Experiment The Scent
The Bottom Line

I, like most of the world, am a sucker for a viral trend. Even if I’m a little skeptical, I can’t help my curiosity. And even if it takes me a little longer to get into it (bike shorts) or I fail at it miserably (sourdough bread), I always appreciate trying something new. Many times, especially if it’s a trend started by Gen Z, it originates on TikTok. That’s where my Instagram friend, Sydney Grace of @ohhhhhhhhhoney, found a recent viral trend that involves a famous scent and... a bottle of Febreze.

When Grace saw a TikToker proclaiming Febreze’s room spray in “Wood” smells like a dead ringer for Tom Ford’s famous Tobacco Vanille candle, she made a mental note of it, even though the video didn’t have too many likes at the time. “I was too interested to ignore what I'd heard when I saw it at the store the next day,” Grace tells me, explaining she didn’t have expectations too high for the product. “I’ve used Febreze before, but it’s always just been one of those things your parents have in their guest bathroom.”

But at $4 a bottle, it’s nearly impossible not to throw it in your cart, which is exactly what Grace did. When she smelled it, she was pleasantly surprised, telling me she never would have guessed a bottle of room spray would replace her desire for a $270 Tom Ford candle. But it did.

Grace shared her love of the spray on Instagram and I caught her stories. I, too, took mental note of the product. Now, I’m not particularly familiar with Tom Ford’s Tobacco Vanilla scent (though, of course, I’ve heard of it), but I am a lover of home scents (candles, sprays, etc.). According to the website, it's inspired by Tom Ford's affection for London. Think: creamy Tonka bean, vanilla, cocoa, dry fruit accords and sweet wood sap. How would Febreze's offering hold up? I figured the worst that could happen was I sprayed the scent once, hated it, and moved on. I’ve certainly spent $4 on more pointless purchases in the past.

As soon as I got home and sprayed it, though, I understood the hype. This stuff smells damn good. Like, really good. Dare I say, it smells better than most perfumes I own. It is quite strong (a spritz or two of the spray will do), but it's absolutely delicious. The notes are warm and spicy, and it really does give you the feeling you’re in a cozy cabin in the woods. Or a musky club in London, perhaps? And the similarities to the Tom Ford iteration are strong. That same heady, creamy, woody, warm vanilla-scented goodness comes through. As one reviewer on Target wrote of the product, “It smells so close to the smell of cedar, I can't believe it.” In fact, another Target customer actually compared the spray to another famous scent: Le Labo’s Santal 33. 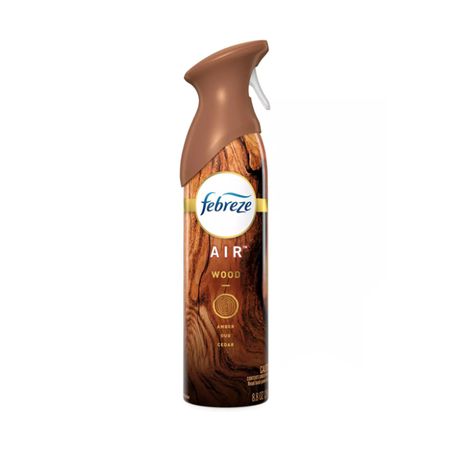 Personally, I’m just glad that I managed to find the two-pack of sprays at Lowe’s (thanks to another tip from Sydney) after a spontaneous trip to buy some mums and pumpkins. I know I’ll be using this product all fall and winter long. “I spray it everywhere, and on everything these days,” Grace says, echoing my thoughts. “If they sold the Woods scent in a perfume, I would totally buy it. No shame.”