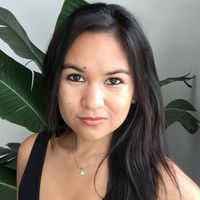 Call it a sign of the times, but this fashion week was all about expression. Beauty has always been an outlet for us to show off our personalities and celebrate the features that make us unique. To do that, we can either go the au naturel route or play it up with the fun colors and textures that personally speak to us. This season, designers chose the latter. Glitter, neon colors, vibrant eyes, major hair accessories, loud nails, and more: We are here for all of it. Click through to see the biggest trends this fashion week.

Call it counterintuitive, but the soft hues really popped when spread across the entire eyelid. We especially love this periwinkle blue at Collina Strada.

It was all about the eyes at Noon by Noor. We love how the rest of the look was minimal enough that we could focus on the pretty yellow eye shadow.

At Anna Sui, Pat McGrath created the prettiest pink purple blend for shadow and a dramatic purple liner right at the crease.

Color blocking is still most definitely in. At Tibi, models wore pretty pastels on the lower waterline and vibrant contrasted color at the wing.

This season, many makeup artists took a traditional staple—the cat eye—and gave it an update. At Adam Selman, the liner started from the middle of the lash line and flicked out. The same technique was applied to the bottom waterline to connect it to the top.

Maybelline makeup artist Thomas de Kluyver called this look "deconstructed glam" at Jason Wu. He modernized the classic cat eye by forgoing liner on the lower waterline and opting for thin, minimal black and yellow lines right at the lid crease. "You should be playful and fun and use makeup like a fashion accessory," he said.

At Coach, models sported black liner that was winged out on both corners with a gap in the middle of the bottom and top lash line.

Leave it to Jeremy Scott to have one of the most fun beauty looks this season. Models walked down the runway in bluntly cut neon wigs, as seen here on Gigi Hadid.

Not only did this model look fierce in her braces, but she even matched them with awesome pink hair down the runway at Philipp Plein.

We're quite partial to glitter and shiny finishes, which are intrinsically eye-catching. The gold flakes laid across the eyelid at Ulla Johnson demonstrated just that, offering a unique spin on a gold lid look.

Shiny doesn't mean it has to have glitter. At Tadashi Shoji, models wore bright colors across their lids with a very glossy finish.

We're getting major galactic vibes from Marc Valvo this season. This grey ombré smoky eye with a glitter finish was that much more dramatic with red liner that started from the middle of the lower lash line and went toward the inner corner.

The inspiration for Tom Ford's beauty look was Edie Sedgwick, whose iconic, smoked-out black eye got an update with his new metallic silver shadow, Shadow Extreme in Onyx, as seen here on Kaia Gerber. The rest of the face stayed natural, with models wearing his new nude lip colors (coming out August 2018). Also, that Tom Ford headband—so good.

Lead makeup artist Gato wanted the vibe to be "a sophisticated woman at a 70s party" at Naeem Khan and he went with a green metallic shade as the base and bright green on the outer edges and lower lash line.

Nineties hair accessories are coming back in a major way this season. At Prabal Gurung, models wore the headbands the defined the punk-rock grunge decade.

Only Alexander Wang can bring back the banana clip. Pair it with super sleek hair and you've immediately modernized a classic from the '90s.

Excuse us while we dig out our old crimping irons, but Libertine just brought back this '90s hair staple and we're all kinds of here for it.

The cool, rocker smoky eye vibe gets a glam update with glitter packed on top of it at Alice and Olivia.

At The Blonds, it was all about the hair. Models wore deep middle parts and hair twisted way up over hair pads.

Victorian vampires were the inspiration at Badgley Mischka. Hair was wrapped into a high pleat at the back for a pointed updo.

The liner that ruled the runway was bright blue. Here at Veronica Beard, models sported a winged blue cat eye and blue mascara.

It's subtle, but the blue liner at Derek Lam is a soft metallic hue that pops up against an all-nude face palette.

Electric blue is the perfect offset to a bold red lip, as seen here at Chromat. We love the not-so-perfect finish as the liner wings out of the lower lash line and looks like it was just splattered on.