My Dad Has Intensely Dry Skin, so I Gave Him a Fall Routine

My dad will be the first to tell you he has "croc" skin. "Croc," you ask? Why yes, it's exactly as you're imagining—dry, chapped, flaky, scaly, and a tad leathery (the man always has a fantastic tan)—aka very much reminiscent of a crocodile. Now, in no way am I trying to be mean or hypercritical. I count my dad as one of my closest friends, and I love and appreciate him to the moon and back regardless of his skin's sandpaper-like finish. That said, he's been the one who's had a word or two (or three or four) to say about the appearance, tone, and texture of his skin as of late. After all, at 70 years old, he's lived a lot of life, and it's only to be expected his complexion would start to show the wear and tear of years of sunscreen-less time in the sun, a nonexistent skincare routine, and all the other stress-inducing lines raising two daughters most surely incurred. Poor man.

Since becoming a beauty editor, I've begun foisting some of my favorite and experimental products both on him and my mom. Not only because I know they'll appreciate the products and recommendations but also because their more mature skin is the ultimate guinea pig. In fact, I often grapple with the idea that so many of the products I own are geared toward anti-aging and wrinkle banishment, but in all honesty, at age 25, I don't have many, if any, wrinkles to speak of. Instead, I'm much more concerned with the hormonal pimples overtaking my chin every month when Aunt Flo comes to town, my dark circles, dullness from too many vodka sodas… You get my drift. So I like to test all of the miracle anti-aging products I receive on the two people I know are A) always game and B) actually aged. Makes sense, no?

Recently, my dad was in L.A. for a few days, so I decided to give him the ultimate what-you-inevitably-get-for-having-a-beauty-editor-daughter treatment and gifted him with his very own customized fall skincare routine. Of course, I'm no expert, but I do know my dad, and I do know of some amazing products sitting atop my vanity awaiting a legitimate challenge. (My dad is annoyingly picky—like me!) Curious to see what went down, what my dad's thoughts were, and, of course, adorable as heck before, during, and after photos? Keep scrolling. 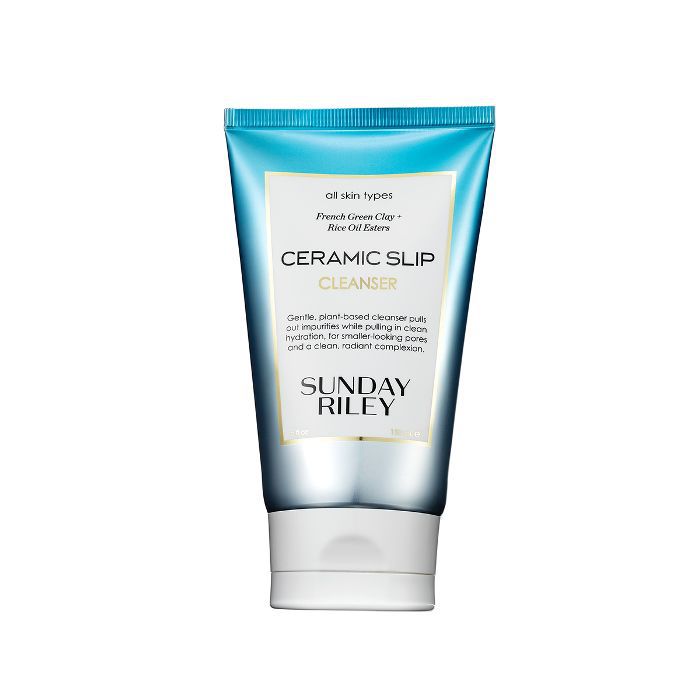 Since the majority of my cleansers are geared toward acne-prone skin—aka not my dad—I opted for this brand-new formula from Sunday Riley. My dad is outside a lot during the day and constantly exposed to environmental stressors, which I'm convinced leave his skin duller and dirtier than it probably needs to be! Of course, he showers daily and "rubs a bar of soap" on his face, but I thought we could do better. Although, to be fair, the last time he was at the drugstore, he opted for an avocado- and oat-infused soap, so let's give credit where credit's due, shall we?

This formulation is specifically designed to draw out impurities and lock in hydration (something my dad's dry skin desperately needs) whilst leaving behind a more clarified and radiant appearance. Post-cleanse, my dad said his skin felt cooler and softer, and as we both looked in the mirror, we agreed his complexion looked brighter overall. (He's such a good sport.) When I asked if his skin felt cleaner and more invigorated, he replied, "Yeah! You know, it does!" Aw. 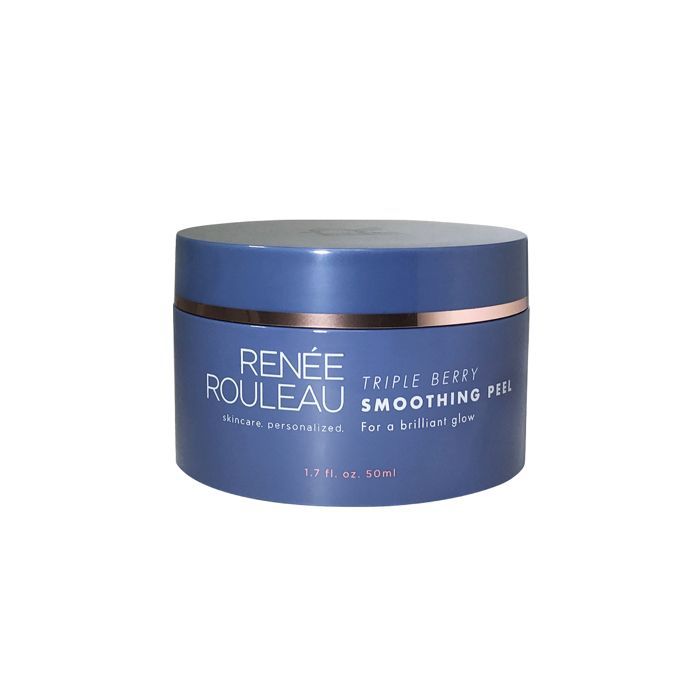 One of the reasons I love Renée Rouleau's Triple Berry Peel is due to the instantaneous results. Don't believe me? Basically every member of Team Byrdie is smitten with the stuff and calls upon it prior to events, first dates, and self-care days. Immediately after using it, I always notice my skin looks and feels smoother, brighter, healthier, and suppler. So I was interested to see how my dad would fare.

Even though he (literally) doubled back in horror when he saw the bright purple-pink concoction of blueberry, strawberry, and raspberry, he was soon assuaged when I told him about our editorial team's obsession with the stuff and how Young Hollywood (e.g. Demi Lovato and Lili Reinhart) routinely snap selfies with it plastered to their glowing faces. Even though he definitely wasn't comfortable with the application and ultimate removal process, he said there wasn't much tingling (something I was worried he'd be sensitive to) and he was actually pretty stunned by the appearance of his face post-peel. We both agreed the skin around his nose and cheeks looked smoother, more even, and less wrinkly, and he said he definitely noticed a difference in the severity of his forehead wrinkles. Plus, he told me he liked the fact it "smelled like homemade jam." Triple Berry for the win! And yes, we most definitely sent Renée a selfie. 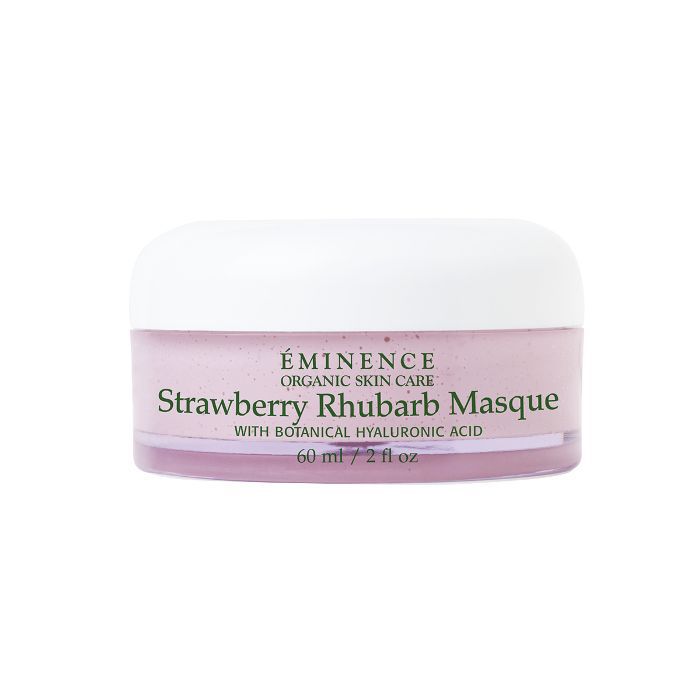 Keeping with the berry theme, I thought my dad would like that this organic mask that literally smells like a cross between a strawberry Pop-Tart and a yogurt parfait. One of my favorite masks of the moment from Éminence Organic Skin Care, it's mildly exfoliating thanks to a strategic mix of strawberry and rhubarb; extra plumping and quenching thanks in part to hyaluronic acid and shea butter; and epically youth-preserving due to the antioxidant-packed likes of grape-seed oil and the brand's BioComplex, which feature coenzyme Q10 and alpha-lipoic acid, alongside another hearty kick of antioxidants.

After the fact, my dad admired how soft his skin felt and he actually said, "Wow, this is really having an effect on my skin. I look younger and have fewer wrinkles!" Not to toot my own horn, but I was pretty satisfied with the results. My dad's previously leather-like, ultra-dry skin had more tone, clarity, and even, dare I say it, a hint of radiance. 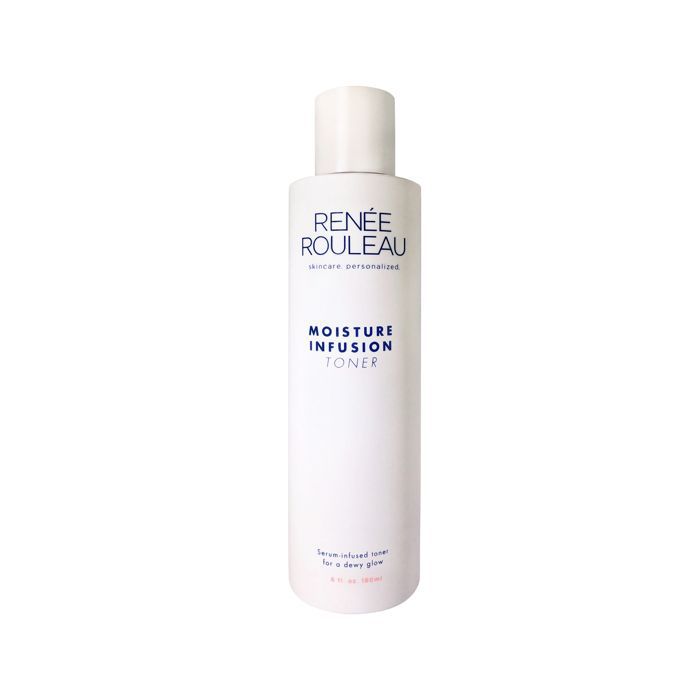 I love this toner, but I never use it. As someone with small, clog- and acne-prone pores, it's a little too heavy for my personal everyday use, but once in a while, I reach for it when my skin needs a major pick-me-up (something my dad's skin—aged and dehyrdated—needed STAT). So obviously, I reached for it as the fourth step in our little regimen.

This serum-infused toner is packed with glow-enhancing skin stuff like niacinamide and fatty-filled omegas. It retains moisture within the skin while also managing to relieve sensitivity and even address signs of redness and rosacea (other things my dad has struggled with over the years that have gone unaddressed). It warns you right on the bottle that the elixir imparts a youthful, dewy glow, and honestly, that's exactly what it did. Plus, I think my dad just liked the idea that it was for sure nixing every last stitch of berry-filled brew off of his face. He said his face felt extra clean and fresh afterward. 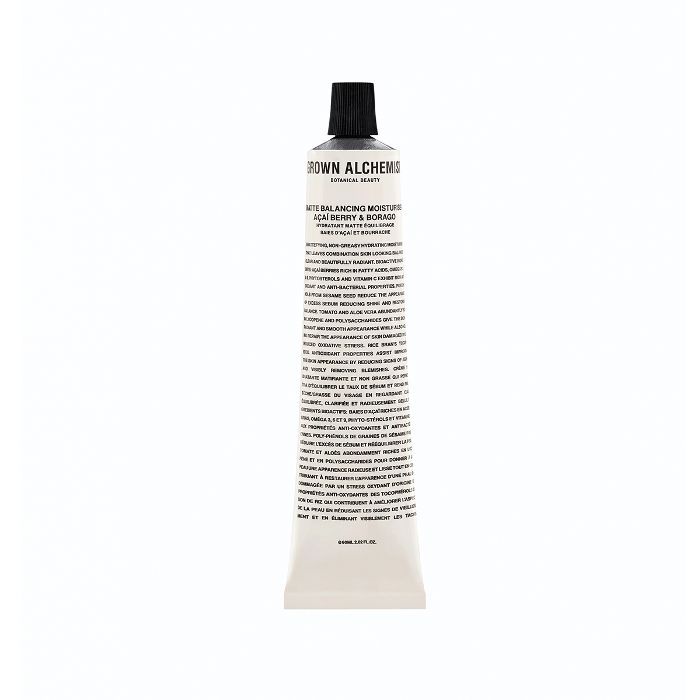 My dad doesn't typically like anything with strong scents and, being the health nut that he is, told me he would prefer products that were on the more natural side of the spectrum. This organic daily moisturizer from Grown Alchemist is one my absolute favorites (it makes your skin so dewy and radiant—never greasy or cloyed) and ticked all of the boxes as far as what my dad was looking for. Since I knew a moisturizer and serum would be the last thing on his face and he'd likely be sensitive to the smell and finish, I wanted to pick wisely. According to his pleased reaction, I did. It's designed to reduce the signs of aging (with every step my dad remarked he was losing wrinkles and fine lines by the minute) and is blended with the nourishing likes of açaí, tomato, and aloe vera to help reverse damage and symptoms of prior environmental stress. 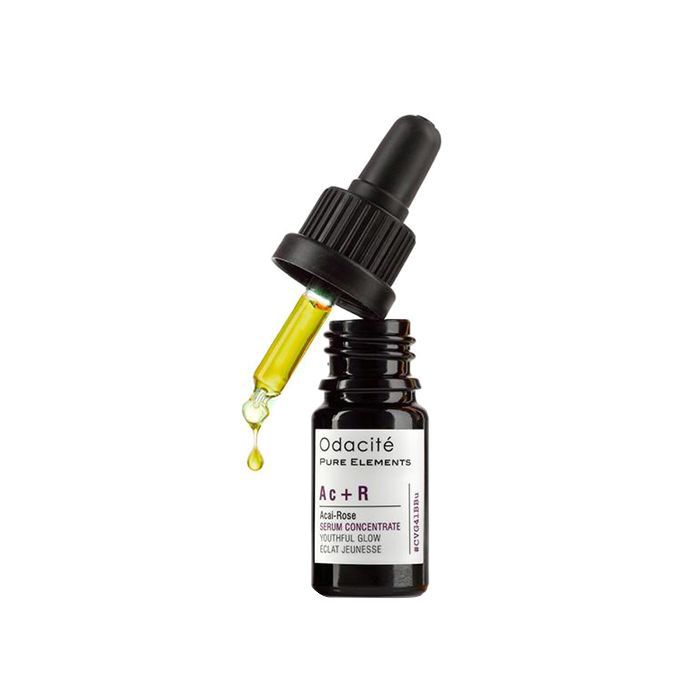 Since I didn't want to completely freak my dad out (I did apply back-to-back variations of strawberry pudding on his face, after all), I planned to call it a day post-moisturizer without the addition of any serums or oils before or after we applied the Grown Alchemist formulation. However, one of my favorite things to do that immediately enhances my glow is to add two to three drops of this heavenly rose and açaí number from Odacité to my moisturizer. The smell is divine (and shockingly, my dad 100% agreed, commenting he liked the fresh botanical scent), and it imparts this ridiculous luminosity and tone that still looks very natural. In other words, it would continue to balance and improve the look of my dad's skin without looking like a Slip 'n Slide. 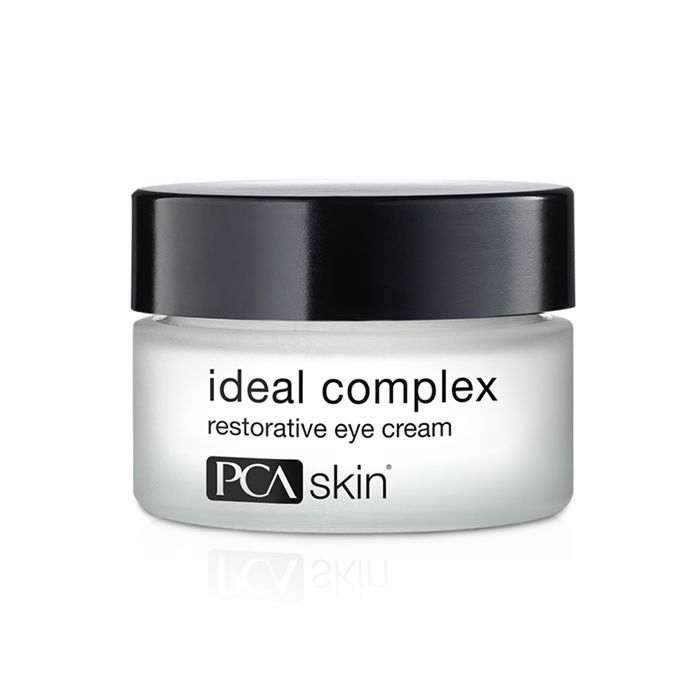 I'll admit that the majority of my hoard of eye creams is geared toward my dark circles, and this is pretty much one of the only ones I own (and love) that I'd trust to my dad's under-eyes. He complains about his bags, lines, and crow's-feet a lot, and this powerful little jar is just the guy for the job. It's super-saturated, so a little goes a long long way, and it uses things like orange stem cells, growth factors, and innovative peptides to reduce signs of aging and nix lines, wrinkles, and discoloration while enhancing firmness and skin elasticity. Immediately my dad tried to wipe it off (he said it felt greasy!), but to be honest, I think it was just a knee-jerk reaction to having product applied to his under-eyes. It's never happened before, after all! For what it's worth, the next morning he said he thought he looked more awake, bright-eyed, and bushy-tailed. 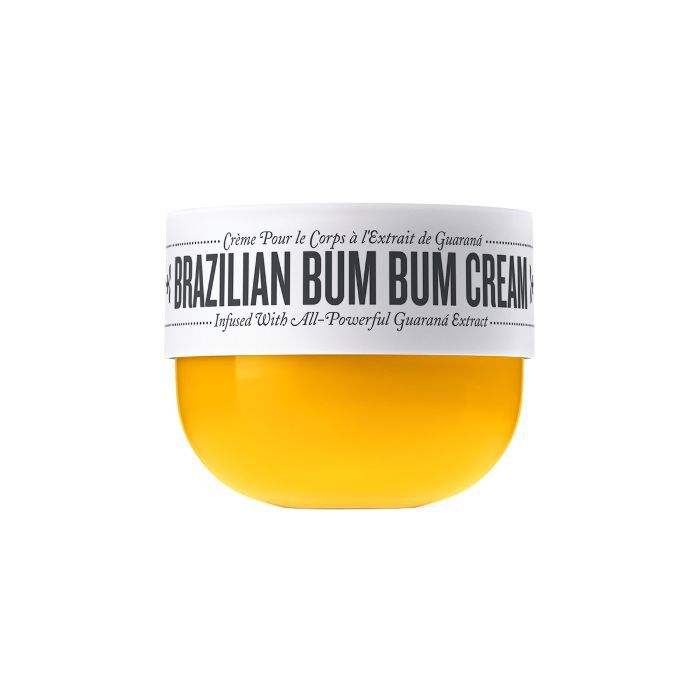 Originally, I hadn't planned on including a body lotion component here, but my dad accidentally discovered this cult-classic body butter during his stay and he loved it so much that I just had to include it. I even let him take home my baby-size tube to tide him over before his own shipment arrived home. Yep, he ordered it.

As I mentioned earlier, my dad typically avoids overwhelming scents like the plague, but the second I offered him up some of my Brazilian Touch Hand Cream ($15), he was transfixed. Obsessed. Head over heels in love. I kid. Kind of. But really, he couldn't stop talking about and applying the stuff. Eventually, he switched from the hand cream to the traditional mixture, as that one's a little lighter than the hand cream. Somehow, he loved the scent and magically didn't find it too saccharine or overpowering, and he also appreciated how well the formula not only melted into his skin (with zero grease or stick factor) but also how well, you know, it just did what it was supposed to do—moisturize and de-croc.

Next up: This Korean Face Mask Made My 70-Year-Old Parents' Skin Look Like Glass