I Tried Bespoke's Customized Mascara—Here Are My Thoughts

Here's a fact about me: Mascara is my favorite makeup product. It's the only thing that makes me look wide-awake and alert before 10 a.m. (well, aside from concealer, since my dark circles are much too bold for my liking). I'm not a morning person. Waking up to a screeching alarm clock after hitting snooze six different times is difficult and tiring enough without also having to look the part. That's why I love—no crave—defined and fluffy lashes. They open up the appearance of my bleary eyes like nothing else.

In spite of my deep and eternal devotion to mascara, I'm extremely picky when it comes to the formula. Just any old lash-lengthening concoction won't do. I think of myself as a sommelier of mascara. A sommelier won't drink just any wine. He/she will choose something old, rich, and likely preceded by the word Château. Those standards don't necessarily apply to mascara (at all), but you catch my drift.

That's why I was so excited to hear about a new and completely customizable mascara from the British cosmetics brand, Eyeko. This novice and interactive process allows the customer to pick and choose which qualities are most important to them. Need a waterproof formula? Check. Lust after length over volume? Okay. Do you prefer a curved, lash-lifting brush over a traditional cone shape? Perfect. The point of the product is to create something customized and unique for each person who wears it. 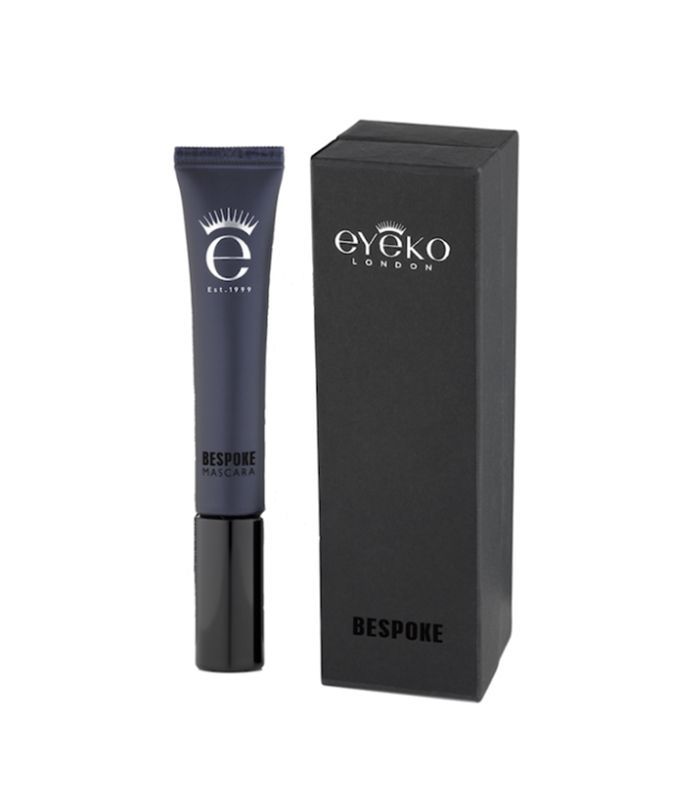 It all starts with a simple interactive "quiz" of sorts. It's only three steps, and it starts by asking you to choose up to three different adjectives to describe your natural lashes. For mine, I chose the words "sparse," "straight," and "long." Next, you choose up to three of your most desired effects. For me, that was volume, first and foremost. I wasn't kidding when I said my lashes were sparse, which is why a volumizing mascara formula is always a must. For the last two desired effects, I chose added curl and something called "the natural look," which I took to mean subtle and defined—the opposite of spidery and clumpy. Finally, you choose your preferred brush. If you're like me and you place high importance on the shape and density of your mascara brush, click the "choose for me" button. (I didn't want to just assume I was choosing the right brush to pair with my perfectly customized mascara.)

After those three quick steps, your customized formula is revealed. For me, that meant a formula that was "as black as my morning brew" and was infused with arginine, ginseng, and peptides to promote growth. The brush that was chosen for me was one that curved into a slight semi-circle to provide a "feline flutter," so I was sold.

When it arrived, the first thing that struck me about the Bespoke Mascara was the packaging. Just like a classic bespoke suit, the long and thin box was midnight black and had clean lines. It was even secured with a sticker that resembled an antiquated wax stamp. When I opened the box, I was pleasantly surprised to see that it housed a compact mirror in the top of the lid. The mascara itself has a navy blue tube and a shiny black twist top. It even included Eyeko's signature silver guitar pick lash comb. In other words, it was some swanky packaging. And I'm a self-confessed sucker for swanky packaging. But, like anything else in life, appearance is ultimately trivial. When it comes down to it, the mascara needed to provide volume, separation, and that fluffy effect only Revlon's Voluminous Mascara ($6) seems to offer. The latter is one of the best mascaras I've ever used, but I digress.

To make a long story short, I fell in love with it at first swipe. The inky black formula applied easily, with zero clumps and virtually no pulling. The smooth and fluid formula meant it was easy to layer without flaking or smudging. I could apply just a little for a hint of definition or go for big night-out drama. Plus, it did everything it said it would—it added a nice lift and curl to my lashes, which are usually stick-straight, along with some much-needed volume too. But what topped all this is something I'm going to coin as "the flutter factor." Even with two or three coats layered on top of each other, my lashes remained light, springy, and fluffy—just how I like 'em. The overall look was natural yet defined. Success.

The only thing I would change about it (however surprisingly) is the brush. While I'm sure it's responsible for much of the curl that's happening, it doesn't suit my preference. Too much mascara resides on the wand since I can't wipe it along the edge of the tube as I unscrew the cap. It results in a lot of inner lash definition. I know that doesn't sound like a bad thing, but for my close-set eyes, I prefer much more definition at the outer corner of my eyes. Thankfully, that's a quick fix. I'll just choose a more traditional brush when I reorder. Which I will be doing. Because I'm convinced I've met my new mascara soul mate.