Every muscle had a memory. 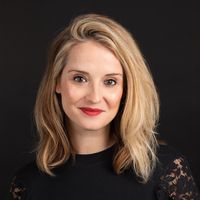 Leah Wyar
Leah is the senior vice president and general manager for Byrdie. Previously she was the chief beauty director of Hearst, working on Cosmopolitan, Elle, Harper’s Bazaar and more.
Byrdie's Editorial Guidelines

Something odd happens when I’m face-down on a massage table. As I dig my head into the cradle and wiggle my hips into the firm surface of the bed, I’m suddenly reminded—with crystal-clear accuracy—of the last time I was in that same position waiting for the therapist to knock on the door. Because massage is my therapy of choice, I’ve historically committed to the muscle-melting, energy-shifting experience once a month or so, usually at the second-floor, hole-in-the-wall spot on Seventh Avenue in New York City, where I’m a regular. Or, when I’m lucky, at a more luxurious space, which is where I found myself recently for the first time in an entire year.

It was my first-grader’s mid-winter break last month when my husband and I decided to “get away.” It had been almost a year since we had done anything vacation-y (unless you count the handful of five-hour drives to my parents' house in western Pennsylvania), and we are new, sleep-deprived parents to a 10-month old baby girl. Some research and a few days later, we were making the two-mile drive from 20th Street to Barclay Street. Thanks to strict COVID-19 protocols, the 24-hour staycation felt “safe,” and served up a dream list of amenities—restaurant dining (we hadn’t eaten out in over a year), an indoor pool for the kids, a spa for the zombie parents—all without having to venture out into the fresh snow. Truth: I would have walked the two miles downtown, Sorels on feet, travel-crib in hand.

And so there I was—one COVID-19 questionnaire and temperature-check later—waiting in the magazine-less relaxation room, fully masked and ready for my first massage in a year. My therapist led me back to the room and set some ground rules. It was all the usual stuff (“jewelry in this dish, face-down first”), except for one small detail: 'You can drop your mask below your nose for the first half-hour, but please pull it back up when you’re face-up."

Just as I closed my eyes, a vision flashed as though it was on cue. Last year on vacation in Miami—same mid-winter break—I was having a pre-natal massage at the Bamford Haybarn Spa in a totally different body, just two weeks shy of the shutdown.

The sound of Tingsha bells interrupted my flashback and signaled the start of my treatment. As my therapist’s strong hands pressed down on the tightness in my shoulders and lumps in my back, I realized how strange this all felt. Taboo was never a word I had used to describe the therapeutic element of expertly trained human hands, but I’d never been touched by a stranger during a pandemic. Knowing how much my body and mind needed the next 60 minutes, I made a conscious decision to take a few fully-masked breaths and stop overthinking.

My stiff upper back was the first area of focus, and as my therapist’s hands began kneading—lightly at first to loosen the surface, then deeper into the depths of my delts, practically scooping out the pent-up stress—I realized during that last massage in Miami, I couldn’t physically lie face down. At 29 weeks pregnant with a 2.5-pound “cauliflower” growing inside of me, I sat face-up (and mask free), counting the weeks until I’d meet my baby—not the (three) weeks of normalcy my family of almost-four had left. While the virus wasn’t unknown last February—I definitely boarded the plane with extra sanitizer (less a survival tactic; more a peace-of-mind strategy)—it was still 7000 miles away. Looking back, the naivety is somewhat unfathomable.

Taboo was never a word I had used to describe the therapeutic element of expertly trained human hands, but I’d never been touched by a stranger during a pandemic.

My therapist took her stress-scooping movements to my lower back—a constant area of stiffness and discomfort, thanks to two herniated discs. But this time last year? Mostly pain free. Pregnancy had a way of bringing temporary relief to this zone (my doctors speculate it’s an effect of relastin, the hormone that relaxes the ligaments in the pelvis). This year, though, the magic of relastin was gone, and the effects of makeshift work-from-home “desks” (at best: the corner of a crib or on top of a tall dresser; at worst: a piles of pillows, even the top of a toilet seat) was real.

After adjusting my mask and turning over, my therapist moved to my shins, their soreness a mystery; I hadn’t worked out in well over a year. She spent a few minutes on my legs, at which point I dozed off into what was likely the best ten minutes of sleep I’d had in months (teething baby problems are also real). Then she reached my stomach, the area that had changed the most. It was soft, no longer stiff. Not quite flat, but definitely cauliflower-free. And my mind flashed to that baby girl, who, in the midst of the craziest year in modern history, was the brightest light I could have ever dreamed of. My therapist returned to the top of my body for a final upper back and shoulder release, sliding her palms underneath my shoulder blades for a final scoop. Sixty minutes was not enough. There was still so much pent up anxiety, so much stress to chip away at still. And suddenly, chiiiiime. Time was up.

As I re-robed and made my way to the locker room, I felt grateful for the last 60 minutes of “normalcy” and continued to reflect. Today, I’m a mom of two and still struggling with the vast imbalance of personal and professional life. But thankfully there are signs of true normalcy. Three weeks ago on that massage bed, I didn't know we’d currently have 21% of the country vaccinated. That several of my most vulnerable loved ones would be ready for their second dose. That all adults in the U.S. will have the opportunity come April 6. And while I likely won’t be back to my monthly massage schedule anytime soon, I know that when I do, my auto-flashback to that staycation escape will be waiting, reminding me how much can change in a year—and to never take 60 minutes of bodywork for granted.

Relax Like a Local: 4 of the Best Massage Places in Chicago