Why Every Makeup Artist Swears By This French Moisturizer

We ask the experts.

Reviewed by Sophia Emmanuel
Sophia Emmanuel is an IAT-Certified Trichologist and licensed cosmetologist based in New York. She owns and operates the Crown Worthy beauty salon in New York City.
About Byrdie's Beauty & Wellness Board
Trichologist
Fact checked by
Lisa Sullivan

Our obsession with French things is not a discerning interest. Men, women, bread, hair, style, accents, animals (French cats, it’s a thing)…the list goes on. Thus, it comes as no surprise that the beauty set’s all-time favorite moisturizer also happens to be French—and like all things French, it’s maddeningly chic, yet completely unfussy.

Say bonjour to Embryolisse Lait-Crème Concentré ($16), the cult French moisturizer in an instantly-recognizable blue and white tube. Thanks to sites like Birchbox and beauty industry buzz, it exploded into the States a few years ago and has since become a mainstay in many a woman’s skincare arsenal. We couldn’t help but notice that makeup artists especially seem to favor the lightweight moisturizer—in fact, once we started paying attention, we couldn’t name a single one who 1) had never heard of it, and 2) wasn’t already carrying it in their kit.

What is it about Embryolisse that makes it such an industry favorite? What sets it apart from the thousands of other soothing moisturizers on the market? We went straight to the source and asked—then promptly bought a few more tubes for our emergency stash. Keep scrolling to see why makeup artists love Embryolisse!

Nowadays, the moisturizer is practically ubiquitous in every makeup artist’s kit—but where and how did they first find it? As with all great beauty discoveries, it seems word of mouth was the catalyst.

“I discovered Embryolisse by seeing it day after day in all of my makeup-artist peers' kits,” says makeup artist Afton Williams, who works on campaigns for brands like Wildfox and grooms the likes of Sophia Bush and Ed Westwick. “I tend to avoid trying overhyped products, but I finally took the plunge and bought a small tube. It was love at first squeeze.”

Makeup artist Kindra Mann, who used the cult product on actress Maisie Williams for the SAG Awards, says she heard about it straight from the mouth of a Frenchman. “I first discovered Embryolisse many years ago when I was still assisting this well-known French makeup artist,” she tells us. “I noticed he always had it in his kit and he always had me prep the skin as part of my job, and I fell in love with it then.”

The common denominator seems to be love at first sight—but why, exactly? According to makeup artist Carissa Ferreri, who counts Gina Rodriguez as a client, it’s all about the finish. “There’s something extremely special about the Embryolisse finish,” she says. “It moisturizes the face while emphasizing a beautiful glow, but it never looks greasy.”

Williams agrees, saying that the moisturizer is ultra-hydrating while keeping a thin, weightless consistency—she uses the word “dewy” specifically. 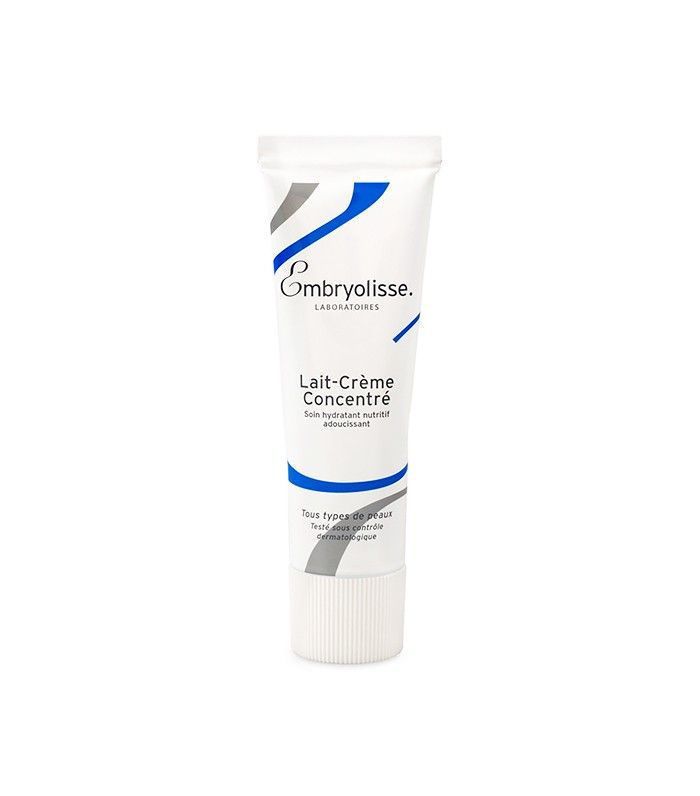 Because of the silky consistency, the moisturizer is also incredibly versatile. Ferreri uses it on her clients as a moisturizer but also mixes it with medium to fuller coverage foundations to create a tinted moisturizer. “I especially like to use it with a cotton swab to clean up any eye makeup residue under the eye for a clean canvas prior to foundation and concealer,” she says. (Sidenote: Mann and Williams both apply the moisturizer to clients' faces with a brush, which perhaps we should all consider doing.)

It’s no surprise the moisturizer also happens to remove makeup—the second ingredient is mineral oil, listed by its Latin name of paraffinum liquidum. The ingredient has received some flack over the years because it’s a petroleum-derived oil (you can read about the pros and cons here). Slight controversy aside, this oil is great for breaking up and dissolving makeup, but it doesn’t actually have any active skincare benefits besides sealing moisture in.

Other than mineral oil, the moisturizer is made with a few emollients (to give it that silky feel), as well as hydrolyzed soy protein and aloe vera. Though paraben-free, it does contain fragrance—something to note for those with sensitive skin.

Even though it doesn’t seem like there are any ingredients in this moisturizer that make it particularly outstanding, anyone who's tried it can attest that it does indeed feel amazing—and in the world of makeup artists, when prepping a canvas is often the most important part of the job, that can mean everything.

Here are the best French skincare brands, and what we recommend from each.