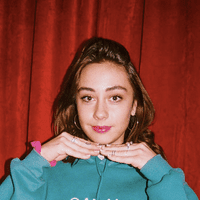 In 2017 Elyse Fox was living her best life—all things considered. She had just ended a five-year relationship, forcing her to move back to New York City from Los Angeles, where she'd spent half a decade building a new life.

At the same time, Fox was traveling the world on her friend's JetBlue Buddy pass and gearing up to film her biggest artist yet as a professional videographer: 21 Savage, at SXSW Film and Music Festival in Austin, Texas. Fox knew the opportunity was a glow-up following a dark spell, but as she searched through the footage, she realized that despite being booked and busy, she felt lost.

Growing up, conversations about mental health in Fox's community were minimal. "I had no representation of mental health and how to treat it, let alone acknowledge it positively," she says. Still, despite not having the framework for understanding what she was going through, Fox found ways to express herself.

While analyzing the SXSW footage, Fox thought of other femme artists she had been filming. "They were so raw, and I realized I couldn't have these artists telling their truth while I'm putting out fluff," she says. Many people wouldn't consider footage of the world's most famous musicians "fluff," but Fox knew she could be more honest.

Without changing any of the SXSW footage, Fox added a narration that reflected her truth: the sadness behind the excitement. Conversations with Friends, the resulting documentary didn't set out to make waves, but after teasing on Instagram and at a New York premiere, the attention didn't stop. "I didn't want it to blow up how it did; I just wanted my close friends to see it and understand what I was going through," Fox explains.

Little did she know; she'd spend the following years of her life shaping the landscape of mental health conversations—but it wasn't a straight leap. As Conversations with Friends circulated, young women worldwide reached out to Fox for mental health advice, and she created the Sad Girls Club Instagram page from her desire to help.

While Fox isn't a mental health professional, she did the research necessary to give thoughtful advice when she launched her platform. This research translated into infographics that Fox shared on the Sad Girls Club Instagram feed, which then turned into hosting in-person events co-signed by the founders of Instagram. Fox's mission with each event—whether the turnout was small or large—was to get people out of the house to learn a new skill or activity. "The goal is for people to make friends because mental health journeys can feel so isolating," she says.

During the pandemic, Fox quickly changed gears and launched Chatroom, hour-long group therapy sessions that connect people to therapists from similar backgrounds. This illuminated the pitfalls of mainstream therapy which is still a predominantly white space. "If your therapist shares the same background as you, it can create an unspoken level of comfort and understanding," says Fox, "You can share your story as your full self, not a layer."

Across all her programming, Fox's work to prioritize women of color in mental health spaces is a response to a harrowing fact: Second to indigenous women, Black women have the highest rate of death by suicide, and it's rising. "They're not enough Black women in positions of power, and there are not enough of us advocating for one another," Fox says.

It's why advocacy is at the core of the Sad Girls Club ethos. "We bring community to the table in an authentic way. We'll never sit you down and force you to talk about depression for an hour," Fox explains. Instead, SGC is the middle ground, where genuine care meets safe spaces and meaningful resources.

The Sad Girls Club Wellness Summit offered group yoga sessions, painting, bouquet-making lessons, and makeup sessions at their most recent event. Fox explains that programming needed to include activities that sparked inner-child joy because—as adults—we rarely make time for finding joy in free play. "That's the theme with all SGC events: embracing our inner child," she says. "You're going to be smiling; your serotonin is firing, and you're even getting sun—all of that plays a role in mental health without it being a conversation about depression where we're all sobbing."

Fox's depression hasn't disappeared with success, but she's learned the value of talking freely about her experiences. "I am constantly working on myself, and I'm in a place now where I can pour into others in a way I wish someone did with me," she says. While Fox didn't plan to be in a position of influence, she's decided to embrace it. Today, Sad Girls Club is a certified nonprofit organization with members in five continents and 40 countries.

What's next? It harkens back to Fox's not-so-humble beginnings filming artists on tour. From a tea party in London to a poetry slam in LA, Fox is taking SGC on the road to bring her community to in-demand cities. A grand tour for SGC is an exciting phase, but Fox's magnum opus is a more grounded "bodega style" model she hopes to seed in spaces all over New York City. "I want to create spaces for trying new things in wellness," she says. "There isn't one way to heal, but people won't be able to discover them if they aren't offered in attractive, accessible ways."

Fox's goal is continually creating long-term solutions for her community, and—judging by her impact thus far—making SGC a nationwide solution for people seems less like a faraway dream and more like the inevitable next step in a fulfilling career.

How Are You, Really? 6 Ways to Check In on the State of Your Mental Health
Article Sources
Byrdie takes every opportunity to use high-quality sources, including peer-reviewed studies, to support the facts within our articles. Read our editorial guidelines to learn more about how we keep our content accurate, reliable and trustworthy.