My Perfectly Blow-Dried Hair and I Agree: The Dyson Airwrap Is Really Worth It

written by
Tanya Akim
Tanya Akim is an LA-based writer who has contributed to Byrdie, Eater, and L'Officiel USA.
Byrdie's Editorial Guidelines
Tanya Akim
Our editors independently research, test, and recommend the best products; you can learn more about our review process here. We may receive commissions on purchases made from our chosen links.

We put the Dyson Airwrap to the test after receiving a complimentary sample from the brand. Keep reading for our full product review.

Like Jiro Ono in Jiro Dreams of Sushi cherishes his tuna knives, there are few things I value as highly as good hair tools. Once in a blue moon, a product comes around that changes my life. The first time it happened for me was a Solano Sapphire Flat Iron and I was 11 years old. Now, 18 years later, I’ve found my new life-changing product in the Dyson Airwrap. In general, Dyson is my favorite brand of lifestyle products—I would sooner give up a collection of designer handbags than my Dyson cordless vacuum cleaner—so when the brand released an innovative styling product that could straighten coarse hair and mimic a professional blowout at home, I couldn’t get it fast enough. Read on for my honest review.

About the Brand: Known first for vacuums and air purifiers, Dyson has re-engineered the approach to hair care by creating tools that address real-world problems (like extreme heat damage).

About My Hair: Course, fine, and frizzy

My hair and I have never been friends. We’re way past the point of just bickering; at one point, we declared all-out war on each other. My arsenal included boar bristle brushes, round brushes, straightening irons, anti-frizz solutions, and anything Mason Pearson-made. “Just wear your hair curly!” is something I’ve been hearing for my entire life. The thing is, I don’t have “pretty” curls. I have coarse, fine, unruly hair that is pin straight on the bottom and frizzy AF on top. Maintaining it in grade school was a total nightmare.

I finally found solace around the time I was 16 when the Brazilian Blowout was introduced to America. Since then, I’ve been getting keratin treatments (varying in strength) around every three months. I’m 29 now, so you can do the math. Most recently, my hair and I decided on an amicable cease-fire. With the help of my beloved stylist, confidante, and friend Teri Kang at Koji Toyoda Salon in West Hollywood, the last two years have been the best and longest my hair has ever looked and felt due to Teri’s protective methods and delicate maneuvering around my ends. For me, there's literally never been a better time to try a tool like the Airwrap. 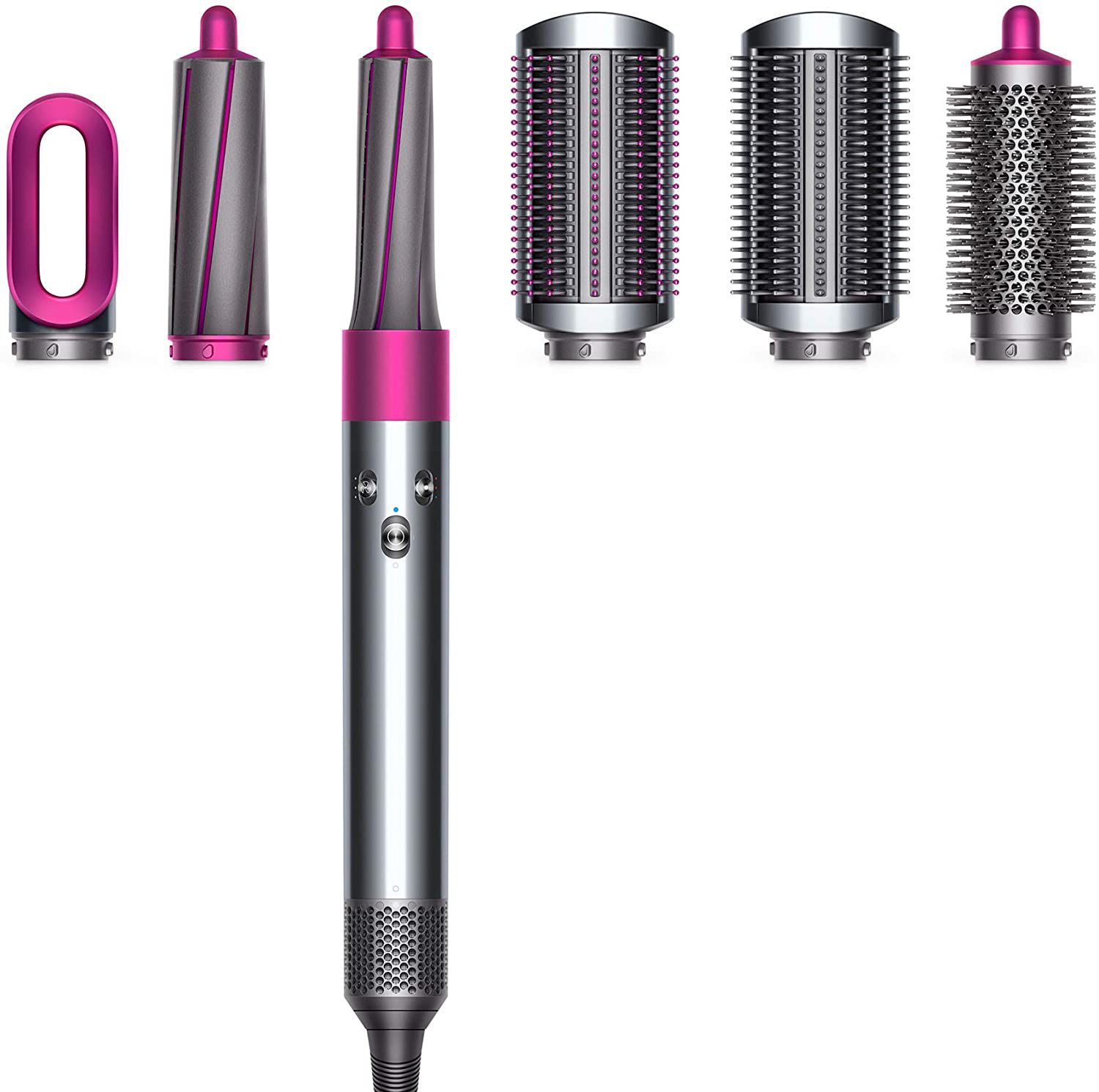 Design + Features: As high-tech as it comes

The Dyson Airwrap is literally packed with features. The device is powered by Dyson's digital motor V9, which spins up to 110,000 times per minute. But that's not all—the Airwrap is equipped with intelligent heat control, meaning it measures its own temperature more than 40 times per minute (!) to keep it under 302 degrees and prevent heat damage.

The Airwrap also comes with six interchangeable magnetic attachments: a pre-styling dryer, a round volumizing brush, a soft smoothing brush, a firm smoothing brush, a 1.2-inch barrel, and a 1.6-inch barrel. A neat thing about these barrels? They actually create an air vacuum so you don't need to hold your hair in place as you would with a curling wand, which eliminates creases entirely. (Although I tested the Complete Styler set, it's worth noting that Dyson also offers two other styling sets: Volume + Shape, for fine hair, and Smooth + Control, for frizz-prone hair. Both sets contain four attachments and are priced at $500.)

In my hands, I thought that the Dyson Airwrap was no more difficult to hold than a traditional curling iron or flat iron—plus, the fact that its magnetic attachments are interchangeable makes it more compact and easier to travel with. I also loved that its long power cord allowed for an ample range of motion and that its included camel leather storage case looks incredibly chic on my vanity.

How to Use: The possibilities are endless

No matter what look you're going for, there's an Airwrap attachment for that. Straighten hair with the firm smoothing brush or soft smooth brush, use the larger curling barrels to create waves and body, or use the smaller curling barrels to achieve beachy waves. (Pro tip: Using the larger barrels, you can add body to the top of your hair by using it like you would a setting roller.)

It's important to note, though, that if showering or washing hair pre-styling, it’s essential to dry it first—either by letting it air dry (to around 60%) or with the Airwrap's pre-styling dryer.

The Results: I'm in love

Reader, I was shocked by how quickly and efficiently the firm smoothing brush attachment straightened my hair—and it wasn’t the least bit flat or stuck to my head. Truly, it had the body and volume of a professional blowout. Even when my hair was fully air-dried, it still made it silky to the touch and smoothed out any fly-aways. I spritzed a couple of front pieces and my ends with water the next day to freshen up my blowout, and it looked just as perfect.

The Value: It's a worthy investment

The Dyson Airwrap isn't cheap, but in this case, you get what you pay for—which is excellence. I’ve saved money on salon blowouts before special occasions and events by using the Airwrap instead. With the range of styling attachments, it’s essentially a blow dryer, hair straightener, and curling iron in one. Plus, the brand’s proprietary mitigants against heat damage are almost priceless for maintaining hair health.

While a direct competitor to the Dyson’s Airwrap doesn't currently exist, the closest thing, in my opinion, is Drybar's The Brush Crush Heated Straightening Brush. Priced at $145, this heated straightening brush is like a straightening iron, a paddle brush, and setting rollers in one. Its goal is to give you a professional straightening at home.

The Brush Crush has a digital temperature control similar to a flat iron and heats all the way up to 450 degrees—but, unlike the Airwrap, it doesn't have any built-in technology to regulate heat and prevent damage. Also, it doesn't curl hair or come with interchangeable attachments. Essentially, it's a solid product, but the Airwrap is in a league of its own.

Our Verdict: It's one of a kind

It's a desert island product. The Dyson Airwrap is literally never leaving my suitcase when I’m traveling. There’s no product on the market that achieves everything that the Airwrap does, and with little-to-no heat damage. Now, if only I could get it to recommend restaurants and give me dating advice like my hairdresser, I would be all set.

Is the Dyson Supersonic Hair Dryer Really Worth the $400? We Investigate