The Dyson Airwrap Just Got a Major Upgrade

Blowdry, smooth, and curl your hair faster than ever. 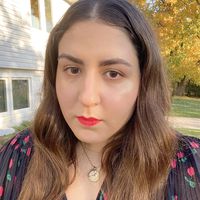 Rachel Dube
Rachel Dube is a freelance writer covering beauty, fashion, and lifestyle, and has written for Byrdie since August 2020. You can find her work in Real Simple, Hello Giggles, BuzzFeed, Shape, and more.
Byrdie's Editorial Guidelines

As someone whose hair is a mixture of frizz and unruly waves, there are few things I cherish more than a good hair tool. With that said, I've also learned how many not-so-great hair tools there are out there. The Dyson Airwrap, however, stands in a class of its own. It's a game-changer for blow-drying, straightening, and styling hair. Personally, I use the tool at least twice a week and have found it to produce salon-quality results while cutting down my time spent styling to ten minutes (or less).

And, I'm not the only one who loves the Dyson Airwrap. TikTok and Instagram adore it, too. Simply put: If you've tried it, you'll understand that the tool is magical—and honestly until this point, I thought the hair tool couldn't get any better. However, I was wrong. This summer, Dyson is launching a brand new Airwrap: the Airwrap multi-styler.

The appearance is much the same as the original hair tool, but its technology, features, and new attachment options bring the already incredible tool to another level. Intrigued? We thought so. Keep reading for everything you need to know about the brand new Airwrap.

According to Dyson, the new Dyson Airwrap is set to be the best-performing and most efficient version of the brand's cult-favorite hair tool. It will be able to curl, smooth, and blowout—like the original hair tool—but will also include features that tame flyaways, add volume, and shape to curly and coily hair. Oh, and it works at a faster rate to prevent heat damage and save you time styling.

However, the best part of the new tool is the sustainability aspect. While the newer launch will include the latest and greatest, those with the previous version don't need to fret. All the new attachments will have the ability to work with the older machines, so you won't have to drop major coin on a brand new machine if you already own an Airwrap.

The new Airwrap arrives with thirteen interchangeable attachments. Similar to its previous version, it includes four different Airwrap barrels, a wide-tooth comb, and a round volumizing brush. Some new attachment additions include firm and soft brushes and a smoothing dryer.

First up: the new Coanda smoothing dryer, which can take hair from wet to damp in pre-style mode. Plus, it helps eliminate flyaways in smoothing mode. The two-for-one attachment is intended to make styling as simple as possible. And, it can work with a variety of hair types due to the Coanda airflow, which attracts and lifts longer strands.

Another new addition is the firm and soft brushes. With enhanced Coanda airflow, the brushes provide more control over your strands to help you achieve a straighter hairstyle. By propelling hair along the strands, it leaves it with a smoother, more salon-like result. The firm and soft brushes arrive in small and large sizes to make finding the best one for you as simple as can be.

Most notably, the new tool will include a major upgrade on the Airwrap barrels. They now can switch airflow direction as you style, which will allow you to reduce styling time since they can produce both clockwise and anticlockwise curls—instead of just going one way. It'll also only require you to have one barrel for your entire head rather than two different barrels. Also nice: They're available in 30mm, 40mm, 30mm long, 40mm long, and 20mm long to help you create a variety of curl styles.

It will also arrive with a wide-tooth comb, which is meant to detangle and lengthen curly and coily hair—and add volume as it dries. A round volumizing brush also creates volume and shape on straighter hair types. All the attachments are one-click with cool-touch tips, so there is no need to worry about burning yourself while using them. They also arrive with negative ions for reducing static during styling and can utilize the cool shot feature (to set your style in place).

Dyson's Airwrap combines a fast, higher pressure motor with a power phenomenon (known as the Coanda effect). The Coanda phenomenon occurs when air is propelled at a certain speed, causing pressure to follow, which traps the surrounding hair with air. Together, this combination allows us to curl, wave, smooth, and dry hair without any heat.

"Most styling tools ignore that hair types are very different—what attachment may work for one, could be detrimental to another," says James Dyson, the founder and CEO of Dyson via the brand's press release. "The advancements of the Dyson Airwrap multi-styler build on the success of its predecessor through relentless research, user trials, and advancements in computational fluid dynamics."

The resulting tool uses this airflow technique to deliver wet-to-dry styling in as little time as possible. This innovation from Dyson also prevents heat damage and preserves hair from unnecessary heat damage from styling. In short, one of the best tool in the business just got better.

The Dyson Airwrap Multi-Styler will be available to shop in summer 2022.