The Durag and Bonnet: A Duo Modernizing Love for Black Hair

Finding fame within the heart of the Black community. 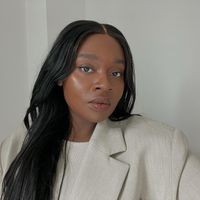 Nateisha Scott is currently a beauty editor at 111SKIN, which caters to luxury skincare and wellness. She contributes to leading publications such as Byrdie, Cosmopolitan US, and Who What Wear UK.

Like a classic '90s rom-com, we love the makings of a love story. By the end of the movie, the pair has always bonded together after going through something. We witness the same symbolism when it comes to the durag and bonnet. The iconic duo in Black beauty are synonymous with strength in vulnerability. Through cultural celebrations, the durag and bonnet have modernized our love for Black hair.

The iconic duo has been styled for red carpets, graced magazine covers, and appeared in music videos and films. They've been at the center of Black beauty rituals for generations. Celebrity hairstylist and founder of Brush with the Best, Felicia Leatherwood, shares "It's a staple for us. It's the first thing we grab before going to bed at night. Both the durag and the bonnet keep our hair intact."

The English dictionary describes the bonnet as a "hat" and the Merriam-Webster dictionary calls a durag (spelled do-rag) "a close-fitting, typically stretchable piece of cloth that is worn on the head (as to hold a hairstyle in place), and that usually has long ends which are tied in the back." Neither definition does the accessory justice. For Black people, "it's reminiscent of soul food for the hair," explains Larry Sims, a celebrity hairstylist and the co-founder of Flawless by Gabrielle Union. "It's one of those things that constantly reminds you of childhood—and how we grow and take care of our hair."

While we can appreciate the beauty of the duo now, the bonnet and durag haven't always been celebrated. Entrenched in racist stereotyping, the hair accessories have faced some turbulence. More than just "cloth," both the durag and bonnet are as complex to history as the molecular structure of Black hair itself.

Birthed from oppression, the idea of covering the head was initially presented by Black female slaves as a form of function when they worked in the fields. Then, housekeepers donned the headwrap as a a symbol of servitude. It illustrated rank in the household. It soon became illegal for Black women to leave the house without their hair covered with the inception of laws like the Negro Act of 1735 in South Carolina. This positioning in history has motioned a delicate connection between the hair accessories and generations-long discrimination.

Even in today’s landscape, the pair (especially the durag) have been demonized by society and mainstream media. "There is something called 'social categorization' in psychology, where we place individuals into categories. What has happened over years, through conditioning, is people have perceived the durag to be synonymous with gang culture or negative stereotypes," explains Dion Terrelonge, a chartered educational psychologist a fashion psychology lecturer. Terrelonge explains the relationship: "When one thing appears at the same time as something else, which could be harmless or neutral, our minds begin to associate the two together." Leatherwood adds, "Mainstream media associates durags and bonnets with being 'unkempt.',"

Furthermore, it's common to see someone remove their bonnet before answering the door or leaving the house, which, according to Terrelonge sends a harmful message: "It offers this narrative of hiding your Blackness, that it's a shameful thing," she says, adding, "I think the durag and bonnet have historically been objects in our culture that are a bit too 'Black' for the wider population."

But, unlike what society has tried to project onto us, both the durag and the bonnet are iconic symbols within the community. "It's a natural part of our culture, it's one of those things we can relate to one another with," Leatherwood explains. In some ways, it's a right of passage.

More than just a piece with cultural significance, the bonnet and the durag are practical and helpful parts of our beauty routines. It can lay down edges, keep them neat, and preserve multiple hair styles from friction and breakage. In its rightful glory, the iconic duo connects generations of practices rooted in Blackness. "There have been so many events throughout history that have torn us away and tried to drag our roots with it. Our grooming practices bond us. Over generations, despite what corners of the globe we've been dragged to, we’ve been able to preserve our hair and its practices," Terrelonge says.

Now, social media helps lead the charge in celebrating the bonnet and durag. There are countless accounts and videos sharing the beauty of what the duo can do. "The durag and the bonnet represent how we love ourselves—I love that it has been translated through the generations without being watered down," says Sims.

Worn either in the house or as a fashion accessory, modern Black culture has positioned the bonnet and durag as a symbol of reclamation. it's helped to shift the dated narrative and validate the love story untold in Black hair, until now.

Why Is Colorful Hair Trendy and Fun—Unless You're Black?
Article Sources
Byrdie takes every opportunity to use high-quality sources, including peer-reviewed studies, to support the facts within our articles. Read our editorial guidelines to learn more about how we keep our content accurate, reliable and trustworthy.