Dry Brushing 101: Everything You Need to Know for Glowing Skin

We tend to take note of anything perpetually glowy-skinned supermodels like Miranda Kerr and Molly Sims swear by, even if it's something as enigmatic as dry brushing.

Chances are that you've heard at least a little about this centuries-old beauty ritual, which has been a favorite of those in-the-know in Hollywood for years. Is dry brushing the key to unlocking beaming, beautiful skin? Can it actually improve your overall health? Instead of blindly grabbing the first brush we could find and scrubbing away, we enlisted the help of Gary Dickman, former lead esthetician at Ole Henriksen Face/Body Spa in Los Angeles, and dermatologist Jeanine Downie, MD, to fill us in on the benefits of dry brushing. Namely, whether or not it can actually get us Miranda Kerr's effortless, natural glow.

What exactly is dry brushing?

Basically, dry brushing is… pretty much just what it sounds like. You take a body brush (look for one with firm, natural bristles) and use it to gently massage your body in an upward motion. Dickman says this process brightens the skin and also makes your moisturizer more effective, as it sloughs off dead skin. 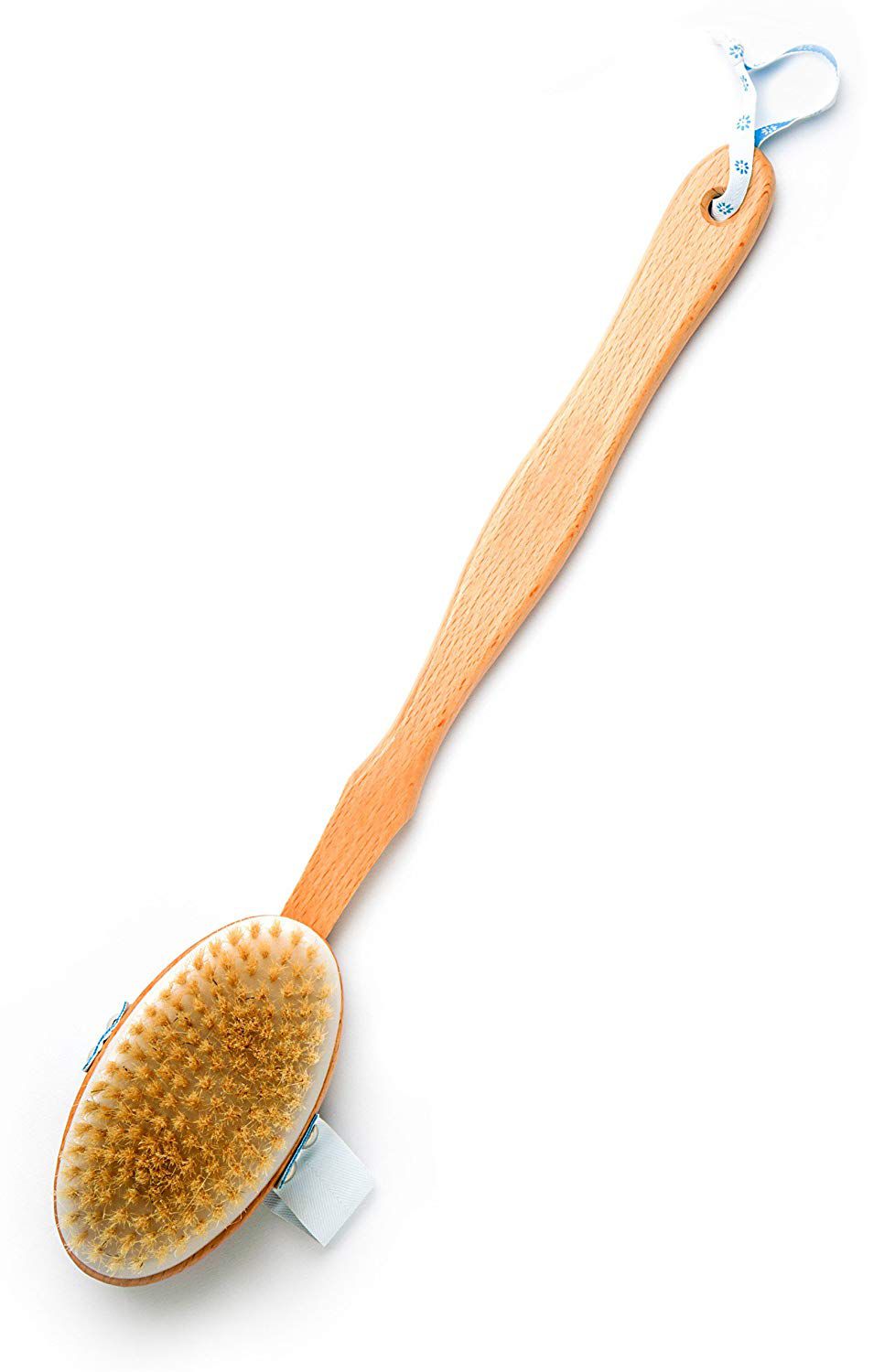 How do you do it?

Randomly scrubbing a brush all over your body and calling it a day isn't going to get you the skin benefits of dry brushing (not to mention that it would be completely needlessly painful). To dry-brush properly, first make sure your skin is completely dry. Starting at your ankle, move your brush over your skin in long, circular motions that go in the direction of your heart, Dickman says. Keep in mind that you're not at a Korean spa—a slight, firm pressure is all you need.

You can dry-brush at any time of day, but Downie recommends doing it right before you shower. (Dry brushing is a great exfoliant, and it's good to get the dry skin off.) After you rinse off, slather on a moisturizer like Aveeno Daily Moisturizing Lotion ($7) or Kiehl's Creme de Corps ($30).

Why should you do it?

If you've noticed that your skin is all red after dry brushing, it's not just a result of irritation, and it actually isn't wholly a bad thing. The redness, which is just a bit of inflammation, is the result of increased circulation in the areas you've been dry brushing. Your body is pushing more blood to those areas, which leads us to our second benefit:

It Aids With Lymphatic Drainage

Aside from leaving you with glowing skin (as if that weren't enough), dry brushing can encourage lymphatic drainage, says Dickman. All blood carries lymph fluid, which filters through the lymph nodes. Through dry brushing, you get it the blood pumping through at a faster rate, which helps get the lymph through the body, therefore removing toxins and pathogens more quickly.

It Has Great Cosmetic Effects, Too

Obviously, brushing your skin with hard bristles is going to exfoliate it. But that increase in cell turnover isn't the only visible positive effect. Plenty of people swear their cellulite is less noticeable after dry brushing, due to the plumping effect it has on the skin. Downie notes that it can even help with the appearance of sun damage.

How often should you do it?

Since dry brushing can leave your skin feeling a little raw (it is total-body exfoliation, after all), it's up to you to decide how often you can do it. As a general rule of thumb, Downie says that women should only dry-brush one to two times per week. And don't forget to wash your brush with baby shampoo at least twice a month (because, ew, think of all the dead skin that builds up).

If you have ultra-sensitive skin, try dry brushing once every couple of weeks. If you build up a tolerance to it, then transition to one to two times a week.

"If you are dry-brushing, you must use sunscreen, as dry brushing makes you more sensitive to the sun," warns Downie. So be sure to slather on your SPF before heading outside. Our favorite body sunscreens are La Roche-Posay Anthelios 60 Ultra Light Sunscreen Lotion Spray ($30) and Coola Sport Continuous Spray SPF 50 ($36).

This story was originally published on July 24, 2014, and it has since been updated.