The Natural Supplement That Replaced My Adderall

What Is the Dopamine Bean? My Experience
How Do You Know if it's For You? The Bottom Line

I was prescribed Adderall at the end of my junior year in college to help with my focus. Mostly, I used it to get through weeklong library binges and to write papers due the next day. By definition, the prescription medication is a combination of amphetamine and dextroamphetamine, which are meant to stimulate the central nervous system to increase your ability to pay attention﻿—and it really worked. However, when I was no longer going to class all day or studying all night, I wanted to find a more natural option. I do have a job that requires me to write all day on tight deadlines—so there's that.

It's been years since I filled my last prescription, and I've never been able to find anything that allows for the same results without any of the side effects (things like nervousness, difficulty sleeping, and loss of appetite). I began to accept the idea that I'd just have to lead a more sluggish life sans prescription.

I had heard rumblings around the office of a natural supplement, nicknamed the Dopamine Bean, that made our editors Faith and Victoria feel really great. At the time, I didn't give it another thought—adaptogenic herbs had been a failed experiment in my kitchen one morning, and that's about it. This time, I was game to try anything. Along with the rest of team Byrdie, I've developed a healthy fascination with alternative wellness. Victoria says of the herbal remedy, "I realized that not only had my energy gotten a major lift, but my focus was razor-sharp—and I was suddenly powering through my workload at a much more efficient pace than I had been before." Sounds a lot like the result of those Adderall pills, to be quite honest. 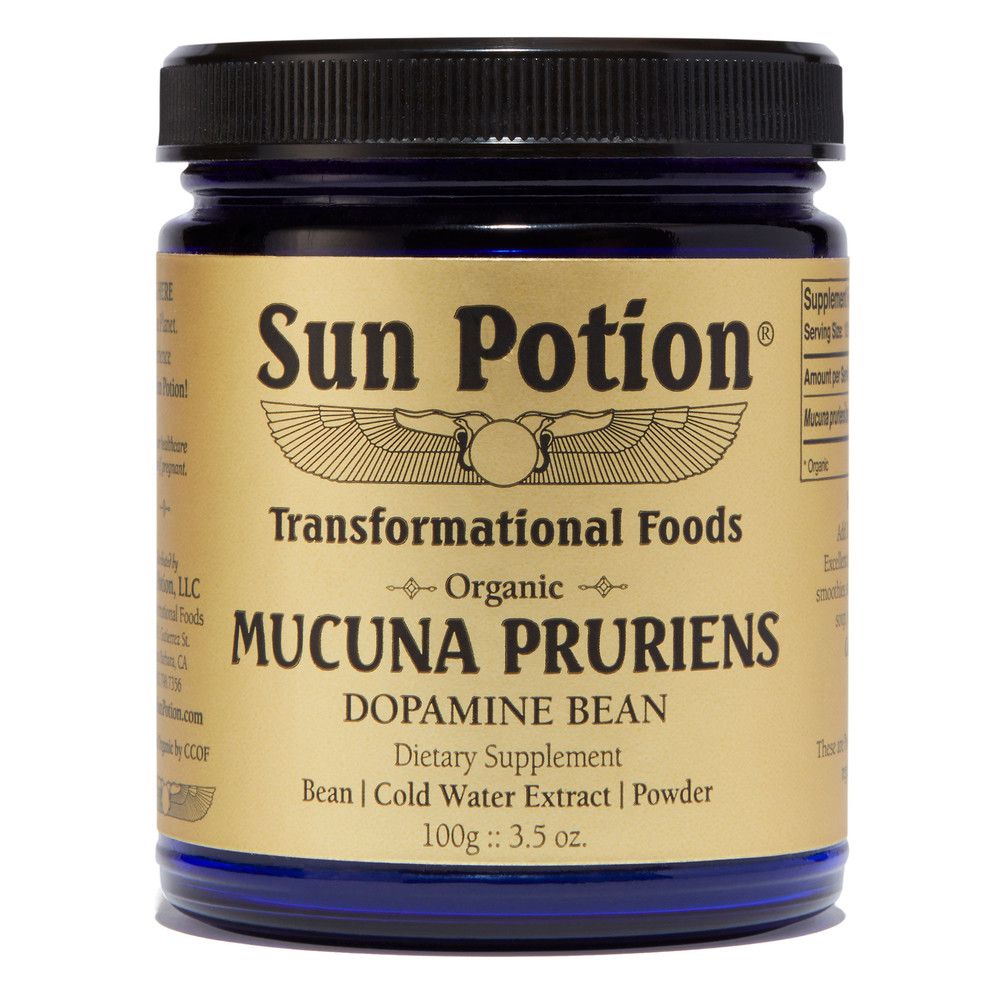 What Is the Dopamine Bean?

Adaptogens have roots in traditional Chinese medicine (TCM) and are claimed to regulate your cortisol levels (your body's stress hormone) to help with digestion; calm anxiety; and boost energy, mood, and even weight loss. This one, in particular, Sun Potion Mucuna Pruriens Powder ($47), contains 15% L-dopa, a naturally occurring amino acid that transforms into dopamine in your brain, according to the brand. Dopamine is a neurotransmitter that allows for more dynamic functioning of the brain, and higher levels of dopamine are linked to enhanced brain function, elevated mood and energy levels, and a more balanced nervous system. So while Adderall might increase anxiety and nervousness, the Dopamine Bean is meant to calm those responses down while still allowing you to crank out efficient (and coherent) work.

I mixed half a teaspoon of the powder in with my coffee and added almond milk. It's virtually tasteless but my coffee was as delicious as ever. After sipping for about 20 minutes, I felt a palpable calm wash over me. It wasn't lethargy or laziness—it was a blissful, soothing energy that was difficult to pinpoint. As someone who often suffers from bouts of anxiety, this is not a pleasure I'm used to. As if by magic, my focus was restored, and I wrote some of my best work that day. It felt like words were flowing out of me, my fingertips rhythmically hitting the keyboard without a second thought. Like my cohorts predicted, I was more efficient than ever—and I was delighted the entire time. Writing, though I love it to my very core, can feel quite draining at times. I find myself looking for excuses to take a break (or eat a snack) more often than I'm actually seated at the computer. Sometimes I feel like I've used up all the words and I'm left with writer's block and restlessness. This is a supplement that cleanses the mind in minutes and rebuilds your stamina just as quickly. Truth be told, I can't believe it took me so long to try it.

This is a supplement that cleanses the mind in minutes and rebuilds your stamina just as quickly.

I called up Jessica Rosen, a certified holistic health coach and president of Raw Generation, for an expert's opinion. She confirmed the results: "Healthy levels of dopamine are necessary in order to feel focused, energized, and motivated, so Mucuna pruriens may help you if you struggle with staying on task, getting things accomplished, or if you have been diagnosed with ADHD." I feel like this powder was made for me.

How Do You Know if it's For You?

According to Rosen, "If you are dopamine deficient, you should consider taking this superfood powder. Some of the most common symptoms Mucuna pruriens will benefit are chronically low moods, difficulty managing stress, memory problems, lack of focus, trouble getting enough sleep, poor motor function, diminished sex drive, and an absence of creativity." Additionally, Mucuna pruriens can be especially helpful if you suffer from Parkinson's disease. "Parkinson's disease is characterized by the death of nerve cells in the part of the brain responsible for dopamine production," explains Rosen. "Mucuna pruriens doses you with what your brain needs to produce dopamine and control symptoms of the disease."

She continues, "If you've been feeling bogged down by low moods and apathy, Mucuna pruriens may just be your salvation. Dopamine is required for the brain's pleasure-reward system to function as it should. Therefore, a deficiency in dopamine is linked to symptoms of depression like loss of interest in things that would typically induce feelings of gratification. Boost dopamine concentrations, and you'll feel ready to take on the world." In fact, Rosen notes, "In some parts of the world, Mucuna pruriens is used as a substitute for coffee, but unlike coffee, it will help you get better sleep—which means less exhaustion and more energy throughout the day. It will help obliterate the brain fog and lack of motivation you've been feeling."

Therefore, a deficiency in dopamine is linked to symptoms of depression like loss of interest in things that would typically induce feelings of gratification.

Of course, as always, this is just my personal story and everyone responds to supplements differently. Karen Kurtak, an herbalist with a focus on acupuncture, Chinese medicine, and longevity nutrition, warns: "Because of the seemingly magical effects of L-dopa, almost all people notice they feel better on these supplements and notice they feel worse when they stop them. Excessive exposure to dopamine may result in your dopamine receptors not working properly."

Make sure to talk to your doctor before taking a new supplement and discuss any possible negative effects.

The 13 Supplements Actually Worth Taking