“Doe Eyes” Is the Sweet Makeup Alternative to “Siren Eyes”

The TikTok battle rages on. 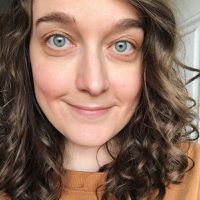 There's a heated debate going on over on TikTok that we haven't seen the likes of since the side part vs. middle part discourse. This time, it's regarding the two biggest eye makeup trends to sweep the app. That's right, it's the battle between "doe eyes" and "siren eyes."

Siren eyes—a new take on winged liner that creates a feline, seductive shape—are perfect for embracing your inner villain, while doe eyes are the trend’s softer, more wearable counterpart. The doe eyes discover page is currently overflowing with takes on the look, including side-by-side comparisons that explore the detailed difference between siren and doe makeup.


Makeup artist Sarah New does an excellent job of distinguishing between the two trends in the above video. The clip begins with a look at doe eyes, which are marked by softer makeup that enhances the size of the eyes. On the other hand, siren eyes are a lot more dramatic, featuring an elongated and sharp wing.


According to celebrity makeup artist Tobi Henney, doe eyes rely on a more natural makeup look. “Doe eyes create a more rounded eyeshadow look that gives the illusion of bigger eyes with a natural finish,” Henney explains. “Ultimately it shouldn’t look like you are wearing a lot of eye makeup.” To create the “doe eye” look, Henney suggested using a matte brown eyeshadow palette and white eyeliner on the lower lash line.


TikTok creator Melanie shared her go-to doe eyes technique, noting, “Your eyes appear bigger when you have a thicker liner on the top, no wing, and a highlight or lighter concealer color on the waterline.”

Completing a doe eye on on eye and a siren eye on the other, the artist points out that the “doe” look makes the eye “appear very big and bright,” while the “siren eye” makes the eye look “much smaller, much more elongated, and almond-shaped.”


The major differences between the two come down to two things: liner and lashes. In her doe eye tutorial, Melanie notes that creating the look requires you to skip the wing, as it commonly “draws the face back and up,” which will take away from the openness of the doe eye.

Instead, keep the liner the same thickness across your lid, and add a full lash. For a siren eye, concentrate the liner on both corners and keep it very thin on the lash line, and add a half lash just on the outer corner.


Choosing between a doe eye and a siren eye comes down to personal preference, but Henny says doe eyes are a more versatile option. “It enhances smaller shaped eyes. But this effect can typically be used on any eye shape,” she says.

So, what side are you on?