The short of it:

The long of it:

Sam Talbot is a Top Chef finalist, author, and restaurateur. His love of food began at a young age working at Dean and Deluca, and by 24, he was an executive chef at Black Duck in Manhattan. Talbot is also a type 1 diabetic.

You'd think having a disorder largely affected by what you eat would be a game changer for Talbot, but he insists "change" is the wrong way to look at his situation. "It enlightens me to look for the next naturally occurring ingredients, to cook with an open mind, and to share my finds and how they helped me," he tells us. "It didn't change me; it inspired me to look deeper and to search with a passion for clean food." In fact, Talbot doesn't avoid any food groups as a result of being a diabetic, but he just tries to be healthy. "[No] white sugar, trans fats, or too much whiskey in one sitting."

The takeaway here is that even if you don't have an issue with your blood sugar, you could benefit from Talbot's take on clean eating. Due to an immune system attack on the pancreas, type 1 diabetics are unable to maintain healthy blood glucose levels and thus need to check these levels daily and avoid eating too much sugar (an excess of sugar could lead to eye, kidney, heart, and nerve damage). For non-diabetics, forgoing an excess of sugar, fat, and carbs are the basic keys for a healthier lifestyle, so adopting this diet, nay, lifestyle is equally beneficial. Instead of eating diabetic foods, a concept Talbot says he "doesn't know" about (Aka they're non-existent), he makes healthy swaps—nut milk for cow's milk to save on fat and calories; fish and poultry for red meat; brown rice flour, coconut flour, and chickpea flour for processed white flour; and coconut or grapeseed oil for canola oil. Carbs are also teeming with hidden sugar, so Talbot replaces pasta with zucchini noodles or shirataki noodles (made from Okinawan yams). 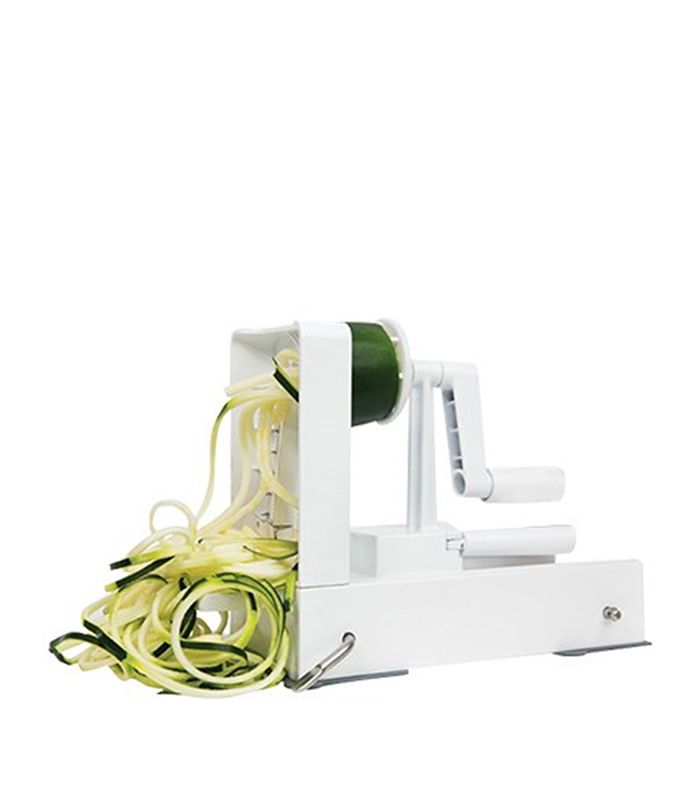 Don't let zucchini noodles (or zoodles) scare you. The Inspiralizer makes it crazy-easy to whip up an entire pot of pasta quickly.

Cutting out white sugar doesn't mean Talbot can't enjoy the sweet life, though. He's a big advocate (and brand ambassador) for Truvia, coconut sugar, honey, brown rice syrup, and maple syrup. If you're eating out, he suggests skipping terms like "glaze" and "reduction" in case any of them are sweetened with processed sugar. Natural sugars will still raise your glycemic index, but they don't "hit your body like a drug" or give you a sugar high, according to Talbot.

Being a curator of sinfully delicious meals, Talbot won't bow out of a decadent dish at a restaurant in favor of his condition—instead, he eats small portions (another tip we can all adopt). "If we go to like, Joel Robuchon, yeah, I'm going to eat everything that I can possibly get in my mouth. At the same time, I'm going to do it in moderation, not gorge on those heavy cream and butter dishes. I go for clean, fresh salads, for those seasonal items, and I go to restaurants that I trust will have the best, no-shortcut foods."

Next, take a look at how celebrity nutritionists nix sugar cravings.