And he's finally opening his own salon. 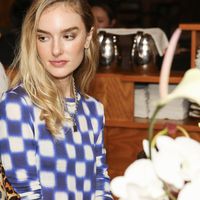 Getting your hair cut is an emotional experience, no matter how drastic. Most people have had their fair share of traumatic appointments wherein the stylist misinterpreted the reference photo or trimmed a few too many inches. Dhiran Mistry understands this struggle. The London-born stylist has developed a reputation over the last 20 years among New Yorkers and Londoners in the know as the man to visit when you want your hair to look perfectly effortless and cool.

A Mistry haircut is defined by its subtlety and less-is-more sensibility. Case in point: those awkward few days following a fresh cut? Unheard of once you leave his coveted chair. Fussing around with half a dozen styling formulas to get your new layers to settle correctly? Absolutely not—his cuts are designed to minimize the need for more than one or two products. Perhaps that's why his clientele will race to book an appointment when the stylist announces he will be in town from Charlotte, North Carolina, where he has recently relocated with his wife and two young sons. His NYC schedule is regularly jam-packed every hour on the hour with new and returning clients, scarcely taking a break from 8 am to 8 pm.

It is this kind of dogged determination, coupled with his undeniable talent for cutting hair and connecting with clients, that is primed to make his new salon, The Carriage House, a must-visit beauty destination for Charlotte locals (and anyone willing to fly into town to secure an appointment). But of course, as any person who has recently opened their own business knows, there is also the need to make time for self-care, and despite his increasingly busy schedule, Mistry has his share of beloved beauty rituals. Keep reading for more details on his journey to becoming a beauty editor favorite and his self-care routine.

You're extremely well-known in the beauty industry. When did you first become interested in hair?

I think it was when I was 10 or 11. I realized that my hair was quite difficult to manage, or I didn't understand my hair. I was surrounded by white kids who had a different texture, and I didn't understand my Indian hair. I kept it short, so I didn't know it had waves. I was trying to do what the other kids did, which gave me a complex. At eight years old, I was putting gel in my hair, and gel back in the '80s was terrible.

What were you doing with your hair at the time? Were you experimenting?

When I got older, I realized barbers couldn't do the haircuts I wanted. In my early teens, I started going to salons instead of barbers. I grew up in northwest London, so you had the central London salons that were more expensive. Going locally wasn't bad, but I went into Camden to get something cooler or funkier. Back then, I got a short back and sides, but once I turned 12 or 13, all the boys got curtains. [The pop band] Take That was famous in the U.K., and all the girls loved them, so all the boys wanted to do that. I've always been into clothes, jewelry, and hair. Hair was the one thing you could change dramatically without it being permanent. I colored my hair and even had patterns shaved into my hair.

Tell me about getting into the industry as a young stylist.

I started to follow my dream at 23 but wanted to start earlier. I just didn't have access. I went to a private boys' school, which was always about academics. You were supposed to go to university and get a corporate job. I became a bartender at 18 and started working in clubs. I partied a lot and avoided growing up like any young guy who didn't know what he wanted. One thing I always knew as a kid [is that] I would be successful if I put my heart into it. I just didn't have an outlet to do hair. Then at 23, I sought an apprenticeship at Daniel Galvin's salon. They were famous for color and had clients like Princess Diana.

I knew the owner's kids, so they said they would give me a trial shift to see if I was interested in it. I impressed one of the stylists, who became my mentor, and I got the job. I worked with him for the next five or six years. A couple of months later, he went to Belgravia, and I became his hair assistant. I worked with him while doing NVQ, which is your cosmetology license. I would do weekly haircuts and colors.

When did moving to New York become a part of your career trajectory?

I got my qualification after four years, and I moved from Belgravia. I went to work in Notting Hill on Portobello Road. I did that for a couple of years and had a ball. Then, I got in touch with John Barrett at Bergdorf's and came out for a four-day trip to research salons in NYC. I said, "I want to work here and do whatever it takes." They gave me a job on the condition that I could get my visa stuff sorted. I moved out with $500 in my pocket. I had a job and a small lofted bed in Bushwick, where all the cool kids lived in 2011. I went from there to Spoke & Weal with Jon Reyman for two years. I got married in those two years and had our first child, River. When he was three months old, I moved to David Mallet. I worked there from the beginning of 2019 to the beginning of 2022.

Now you're something of a cult favorite among editors. What about your approach has garnered you so many loyal clients?

Working in London and NYC gave me a wide understanding of people and hair. Being able to relate to people [is important]. I've worked with different people and hair types, making me more well-rounded. It's given me more exposure, and I worked my ass off. I made myself available, never said no, and used social media to network as much as possible. I'm dedicated to making people happy with their hair.

Your cuts always look so effortless. What's your secret?

It's important that people know what they're getting, and if I was to overly style your hair, then you don't know. Dry cutting allowed me to show people what they were getting at the salon. A lot of the time, when someone goes somewhere new, they don't always know how they feel. They leave and have to wash it but haven't decided whether that's a good haircut until a week later. I can get that out of you while you're still at the salon— you can tell me what you like and don't like.

Less has always been more, and that's been my approach. The right haircut will make it easier to style your hair, even though I don't want my clients to rely on styling. If you style it [too much], you can cover up imperfections. You should be able to wash your hair, throw in a bit of product, and have it look good without blow drying and sectioning it because that isn't realistic in daily life. My clients want a good haircut that looks good every day, that grows in well, and that they don't have to fuss with.

Tell me when and why you decided to leave NYC for North Carolina.

We moved to Charlotte because my wife had family here. Because I didn't have clientele in Charlotte and I do in NYC, I kept going back. When I first moved, I told my clients I'd be back in three weeks and booked people in advance. By coming every month, I saw different people on rotation—about 70 people every month. Coming more regularly allowed me to keep my clients and build up my Charlotte clients.

What has the process been like designing The Carriage House?

[The salon is] in a house. It's got charm and character, is perfectly imperfect, and the light is amazing. The space is great, but I wanted it to feel warm and welcoming when you're here. People feel more comfortable in a home, and it's so important that you have good energy in your home. I want The Carriage House to feel like you're being invited into my house. The point is for you to feel relaxed so you can tell me about your hair and what you want to change. If you are uncomfortable, you won't be honest about what you want to change and how I can help.

Is there any major difference between your two locations in terms of what people are requesting?

Not really. For [my Charlotte and New York clients], the biggest thing in common is that they want a good haircut. They all want to look good. Coming to see me is their self-care. For example, some guys don't understand expensive haircuts. [They'll think] it's pointless because a barber can do the same thing, but I can give you a shape that will grow in well. People don't understand [my] cut because they haven't experienced it, but they return once they do.

In any place outside a major city, they don't grasp the concept of a specialist. And people don't know that they want one because they haven't been able to experience it. It's unfair to say that someone in Charlotte doesn't want the best haircut possible—they just haven't had it. [You should be able to] get a great haircut or color anywhere.

How do you take care of yourself?

I get a regular massage at a spa in Charlotte called Toccare. My masseuse's name is Anne, and she's amazing. I also get pedicures because I'm standing all day. As far as bodycare, I'm such a minimalist. I use Renpure Body Wash, Native Deodorant, and Le Labo [Bergamote 22] Body Lotion. I think smelling good is so important.

With my hair, it's currently shaved. [My assistant] Anna has been cutting my hair for the last year we've worked together. I'm not as adventurous, but I get bored easily. I've had it bleached. Shaved is easy for me. I go through periods where I want to try something, but then I don't want to spend time on those rituals. It's a lot of upkeep. I also like tattoos—that's another thing that's my treat.

What has been the most satisfying part of this phase of your life and career?

The salon opened on November 1, 2022. It still feels like I have a lot to do, but the space is special. It's been nice coming into a space that's a representation of me. It's nice to shock people with it. I've always shocked them. When people see I have a shaved head and tattoos, they wouldn't expect the nice furniture and candles. I like to keep people guessing.