We put derma-rolling to the test.

Victoria Hoff
Victoria channeled her editorial skills into a career in content marketing and brand strategy. She is a former wellness editor for Byrdie and held beauty and wellness editorial positions at ELLE, The/Thirty, and more.
Byrdie's Editorial Guidelines
Medically reviewed by
Dr. Geeta Yadav, MD

Medically reviewed by Dr. Geeta Yadav, MD
Geeta Yadav, MD is a board-certified dermatologist based in Toronto, Ontario, Canada. She earned her undergraduate degree at the University of Toronto, where later completed her residency.
ABOUT BYRDIE'S BEAUTY & WELLNESS BOARD
BOARD-CERTIFIED DERMATOLOGIST

I am a willing and able beauty guinea pig. My MO has always been that I will try anything once. I’ve gotten acupuncture on my face; I’ve locked myself in a sensory deprivation tank. The #KylieJennerLipChallenge? Been there, done that, and still have the bruised selfies as proof. Which brings me to...my lips. Many of the wacky treatments and products I’ve tried have involved plumping up my pout (no injections, though—promise) because it’s just my thing: The aspect of my appearance that I’m not crazy about. My lips aren’t the thinnest in the world, but they’re on the small side—and vaguely asymmetrical, enough to drive me crazy. On most days, some expertly applied lip liner does the trick, but I’ll never say no to the opportunity to give them some more oomph.

So when I read Michelle Phan’s profile on Into the Gloss, I digested this little tidbit as a precious gem: “For lips,” she said, “I’ve been doing micro-needling with a derma-roller that I get from Switzerland. ... Within two days you will notice right away that your lips will look bigger because the collagen will grow back.” She said that she preferred derma-rolling lips over fillers, and BAM: I was sold. As it turns out, Phan isn't the only one extolling the benefits of lip derma-rolling. "There have been some questions surfacing around the effectiveness of using a derma-roller over the lips," says Josie Holmes, an esthetician at New York's SKINNEY Medspa + Wellness. "The main benefit of rolling the lips is to create a plumper look."

Keep scrolling to learn more about derma-rolling lips, get expert tips, and find out if using a derma-roller on my lips worked for me.

What Is a Derma-Roller?

A derma-roller is a handheld device that contains hundreds of tiny, stainless steel needles on its head (slightly terrifying, I know), which work to penetrate the top layer of your skin. By rolling across problem areas on your face, the needles create micro-injuries, which in turn boosts collagen while your skin heals and regenerates.﻿﻿ "The plumpness comes from inflammation due to the superficial injury caused to the skin," explains Holmes. Many cosmetic dermatologists recommend it as an alternative to lasers for a manner of skin conditions, ranging from discoloration to fine lines—or even just to allow products to work more effectively. "While it may seem scary to use, the process is painless and the benefits are unparalleled," says Holmes. "By rolling the needles over your skin, you are creating microscopic channels, which allows for better product absorption and efficacy."

"Depending on needle length, derma-rolling can assist in treating a variety of skin concerns including superficial hyper-pigmentation, enlarged pores, uneven skin tone and texture, post-inflammatory pigmentation, and some fine lines," says Holmes. I’ve faithfully used my derma-roller for more than a year, as it has proved to be an immensely effective way to remove my stubborn eye bags. At the time I read Phan’s ITG profile, however, I had never tried the treatment on my lips before—nor had I ever attempted micro-needling at home.

Though she mentions that she got her derma-roller from Switzerland, she says in another post on her own blog that she also orders them on Amazon—so it was off to the virtual superstore for me. For lips, Phan recommends needles no larger than 0.75 mm since the skin there is so delicate. I purchased one that was just a bit smaller, 0.5 mm. (Now that I’m more familiar with derma-rolling at home, I use Stacked Skincare’s 0.25 mm device—it’s easier on my skin but no less effective.) 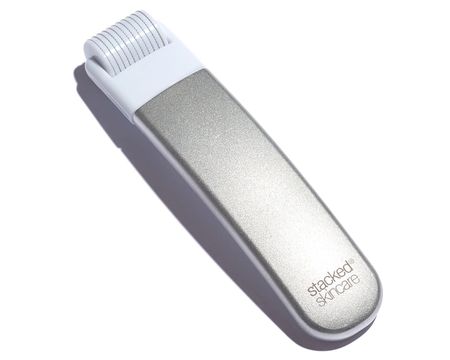 How to Prepare for Derma-Rolling Your Lips

It’s best to use a lip scrub before derma-rolling because then the needles can really push the treatment beneath the surface of the skin. "Just as it is important to properly prep the area of the face or the body for rolling, it is equally important for the lips as well. I choose to utilize a lip scrub prior to rolling my lips to exfoliate away any dead skin cells," says Holmes. "As you would normally apply a serum following rolling, I also suggest using a lip serum or hyaluronic acid after rolling the lips."

Holmes's personal favorite pre-rolling product (for both the lips and other parts of the body) is Neocutis Hyalis+ ($120), an oil-free but highly moisturizing serum that utilizes a variety of molecular weights of hyaluronic acid and sodium hyaluronate. "The multifunctional blend helps to soothe and calm stressed skin following cosmetic procedures," she says.

Sometimes, though, you just have to utilize what you have on hand. So, for pout-boosting purposes, I dug up my tube of G.M. Collin’s Lip Plumping Complex ($34)—a wonderful tingly gloss that’s great to use on its own if needles make you queasy. After slathering that on, I pulled the derma-roller out of its packaging and tried to convince myself that I was a lot braver than I actually felt.

What to Expect From Derma-Rolling Your Lips

For the most effective treatment, you’re supposed to make the surface area for the needles as flat and hard as possible,﻿﻿ so I smiled widely (in spite of myself) and pressed my lips against my teeth. Then, I got to work: I rolled the needles back and forth, in horizontal and vertical patterns, as hard as I could bear. Yes, it was painful. Yes, there was a TINY bit of blood—although, miraculously, no tears. (It's worth noting: Now that I use a roller with smaller needles, bleeding isn’t part of the equation at all—and it hurts a lot less.) After rolling for a few minutes and deciding I had probably done enough damage, I applied more of the lip-plumping gloss and went on my merry way.

Of course, the results of derma-rolling lips aren't forever—but they can last a while. "These results may be temporary, but can last up to two weeks," says Holmes. "If you are looking to continuously see these results, it is recommended to roll the lips at least once a month but no more than every two weeks."

As mentioned above, a little bit of blood is to be expected. "When derma-rolling your lips, you may notice a tiny amount of blood as the lips are very well-circulated, but if you regularly sanitize your roller heads and replace them as needed you should have no problems," notes Holmes.

Fortunately, I didn't notice many other side effects. And after the bruising debacle that was the #KylieJennerLipChallenge, I was fully prepared to hide my face in public if need be. But aside from a little bit of redness and a sensation similar to a mild sunburn, I was totally fine. Then, it was time to begin the waiting game to let the collagen regeneration do its work.

And huzzah! It wasn’t a mega-pout or anything, but two days later, there was a difference for sure. My lips were definitely firmer and slightly bigger—which, if nothing else, provides a much better canvas for liner and lipstick. And given that this was just the first round, I had high hopes for the months ahead—sure enough, keeping up with once-a-month retouching has proven great for my pout. Take that, #KylieJennerLipChallenge.

The 8 Best Lip Plumpers of 2022, Tested and Reviewed
Article Sources
Byrdie takes every opportunity to use high-quality sources, including peer-reviewed studies, to support the facts within our articles. Read our editorial guidelines to learn more about how we keep our content accurate, reliable and trustworthy.