Unexpected Denim Is the Latest Y2K Trend Taking Over 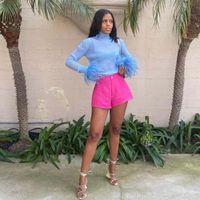 Shelby Hyde
Shelby is a fashion writer and editor in New York. She has contributed to Teen Vogue, Harper's Bazaar, The Zoe Report, and more.
Byrdie's Editorial Guidelines

If you’ve been keeping up with the current fashion cycle, then you know that the top trends have a common theme: Pragmatic. From cargo pants and maxi skirts (opposed to the micro mini of last season), to the Birkenstock Boston mule that Lyst dubbed the shoe of the year in its annual fashion report, shoppers have started gravitating towards more practical options. Both off and on the runway, denim's rise in popularity has reached new heights. Enter: The denim-ification of fashion.

So, how can denim be “trending” when blue jeans are a core staple in wardrobes around the world? There are a few things to consider. The first, is that though denim is a household name, the ways in which it can be treated and manipulated are endless. “[It’s] like a blank canvas,” explains Eleanore Guthrie, founder of knit denim brand Knorts. “You start out with fabric in its raw indigo form and then you can apply various treatments to create whatever design you want. It's definitely an art and almost all of the fading and distressing is done by hand, which not many people know because humans are so disconnected from the construction process of the things they buy.”

And because of this design versatility, there’s been an influx of powerhouse designers putting their spin on the classic denim look. Names you wouldn’t normally turn to for the notoriously casual material are producing show-stopping interpretations. Glenn Marten’s Diesel debut comes to mind. As does Blumarine’s revival of the acid-wash for spring/summer 2023. Max Mara’s take was a bit more streamlined with monochromatic denim. Whereas some were going as far as feigning the appearance of blue jeans, like Knorts and Matthieu Blazy's viral leather pants from Bottega Veneta’s runway. Regardless of the medium used, the denim trend has been bubbling up for a few seasons now.

According to Fashion Psychologist Shakaila Forbes Bell, this uptick in denim usage in the industry is a reflection of the times—(current housing crisis and the ever rising cost of living globally). “People like to use their style as a way to reflect the cultural zeitgeist,” the Big Dress Energy author explains, describing the consumer trends presented by Afterpay as styles that are a bit more utilitarian and pragmatic.

When one thinks of denim it’s likely that the American West comes to mind, as it’s home to some of the industry’s legacy retailers, including Wrangler. Since its inception in 1887, Wrangler has maintained its status as the designated denim brand for cowboys—it's a title sponsor for the National Finals Rodeo and a notable partner of popular television show Yellowstone (plus, both Drake and Kourtney Kardashian Barker are fans). But despite its all-American connotations, many experts cite Nîmes, France as the original birthplace of denim. The earliest iterations of the fabric were defined by a single-colored thread woven with a white one to create a twill-like material that eventually evolved into the hard-wearing cotton fabric used today. But it’s worth noting that the first patent for a pair of blue jeans wasn’t granted until decades later in 1873, when Levi Strauss and tailor Jacob W. Davis teamed up to create the first five-pocket design, complete with the riveted hardware.

“Denim is so entrenched in history that it seems to have a tight hold on how much innovation is being done within the industry,” Guthrie says. “A lot of the industry thinks that in order for something to be considered denim, it has to be made the traditional way and I disagree. When I see designers thinking outside of the box with how they are making denim, it's exciting because it pushes [us] forward,” She adds, “I've always led a very active lifestyle, but never had jeans that supported it, so I decided to create my own. [When] I started Knorts, I had an affinity for knitwear—I love how comfortable and cool the textures are so I decided to start designing with that medium. These textures in particular when used to make knit denim would cause (and still causes) people to do a double-take because at first glance they see pants that look like [jeans].

If you’re hoping to embrace the newness of the trend, here are a few things to keep in mind. Rather than grabbing a classic pair of jeans, consider opting for denim accessories instead. Brandon Blackwood’s denim Valentina bag has a compact shape that can be worn with just about anything. Whereas the Icelandic shoe brand, Kalda, has a sizable assortment of denim-covered footwear. For those who prefer clothing, going the upcycled route à la Levi’s collaboration with Sami MIro Vintage ensures you get a one-of-a-kind piece that’s as interesting as it is wearable. Continue reading for a well-curated selection of the products from the brands experimenting with denim in a way that feels relevant for the new season.

11 Fresh and Cool Ways to Wear Denim on Denim