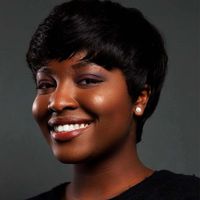 Christine Forbes
Christine is a multimedia journalist specializing in storytelling for digital platforms. She has contributed to Prevention Magazine, Buzzfeed, BET, and more.
Byrdie's Editorial Guidelines

Growing up with kinky hair in the U.S. did a number on my self-esteem. My hair never slicked back into the perfect bun my dance instructors preferred. My mom said weaves were out of the question, I was too young. Age-appropriate hairstyles took so long to install I often lost feeling in my legs. After all that, I was teased by my classmates for having “nappy” hair. I hated my hair so much I fried it every morning with a flat iron before middle school. Like many afro-textured women, I was alienated from my hair as a child. It wasn’t until the natural hair movement began in 2009 that I finally tried to learn more about caring for my hair. Slowly, I stopped fighting my curls and began cherishing them. It’s 2020 and my hair is flourishing but, 4C hair remains the most marginalized hair type.

The natural hair movement was created by and for kinky-haired Black women. Black hair vloggers like Rochelle Graham-Campbell coined the LOC technique because 4C hair is prone to dryness. Shea Moisture, a Black-founded brand, became a staple in the homes of afro-textured women everywhere. Still, many of the best store-bought products were very expensive. So, Black women engineered affordable DIY recipes and shared them online. The natural hair movement changed when it went mainstream. White-owned companies created new lines to appeal to naturalistas. Shea Moisture reformulated its products to cater to looser hair textures. In their infamous commercial, white and mixed-race women complained about “hair hate” towards their straight and wavy strands. It was met with so much outrage the company issued an apology. Black afro-textured women were upset because their struggles had been co-opted and whitewashed by the brand their dollars had built. Yes, everyone has hair challenges. However, only Black hair issues are rooted in institutional racism.

Shea Moisture’s commercial wasn’t the first or last time marketing companies utilized the one-drop rule to erase dark-skinned, kinky-haired women from the movement they created. Gradually, we were replaced by racially ambiguous women with loose curls who had always been praised, at least within Black communities, for having “good hair.”

There’s a reason people fawned over North West’s wavy, multiracial hair but attacked Blue Ivy Carter as a toddler for having an afro. The devaluation of afro-textured hair is called texturism. It goes hand and hand with colorism, which is discrimination against darker-skinned people within a race. Basically, the looser your hair and the lighter your skin, the more privilege you have. It’s why the most visible naturalistas tend to look more like Tracee Ellis Ross than Viola Davis. Davis herself made a statement in support of a 4C haired little girl who truly believed she was ugly (video below).

“Twisted: The Tangled History of Black Hair Culture,” is a must-read for any 4C person who struggles to love their hair. In her book, Emma Dabiri brilliantly explains how colonization shaped perceptions of afro-textured hair in the West. Hair has historically been used as a means of racial categorization. During Apartheid, people relied on pencil tests to determine whether they were “colored.” If the pencil fell out of your silky, loose hair, you reaped the benefits of whiteness. If the pencil was securely lodged in your thick, coily tresses, you were Black. So, Dabiri argues that hair texture largely reflects Blackness, sometimes more than skin color. Think about it, Black people aren’t literally Black—they’re varying shades of brown. Yet, we consider albino people with very little melanin to be Black because of their hair texture.

Although afro hair is subjected to a lot of racism, it can help us realize our revolutionary potential. Africans stored rice in their hair to avoid starving during the middle passage. Maroons donned braid patterns that charted their escape from slave plantations. It’s no coincidence afros were the hairstyle of choice for Black Power Movement activists who demanded human rights and valued authentic Blackness.

We cannot allow racism to sabotage our self-perception any longer. Changing the world means changing how we see ourselves, including our hair. Keep reading for five affirmations to boost your hair-esteem.

Your Hair Is Not the Problem

Raise your hand if you’ve ever been called “tender-headed,” by a stylist being rough with your hair. In essence, “tender-headed” is a term that blames afro-textured people for refusing to silently tolerate scalp trauma. It serves as a perfect example of how people with kinky hair are socialized to believe their hair is a burden; a problem needing to be fixed. From the aisle to the salon, 4C hair is neglected and misunderstood.

Like every other texture, kinky hair has unique needs. If society valued Black women, our hair would not be treated as an afterthought. Imagine how much easier it would be to achieve healthy 4C hair if companies dedicated resources to studying it equal to straighter textures. It would be less of a challenge to find stylists that won’t put you at risk if beauty schools required all students to learn how to work with 4C hair. Society is the problem, not your hair.

Healthy Does Not Always Mean Shiny

The star of the stereotypical hair commercial is pretty predictable: a beautiful girl with thick, glossy, bouncy, straight hair. These images feed the assumption healthy hair must be shiny. But the level of shine is largely a product of porosity and genetics. In its raw state, kinky hair isn’t as reflective as straighter textures due to its tightly coiled, non-uniform curl pattern. Many afros are so dense they won’t budge, no matter how hard the wind blows. Equating hair vitality with shine and movement reinforces white beauty standards. Our hair is different, not unhealthy. We need to stop trying to make "fetch" happen, or in this case, expecting 4C hair to behave like anything other than 4C hair. Instead, let’s start appreciating the strengths of our afros. Name another hair type that defies gravity and can be shaped into pretty much anything, I’ll wait.

Unprofessional, coarse, distracting, hard, nappy, wild, tough, frizzy. If you have type 4 hair, odds are you’ve been accosted by one of those words. Anti-Blackness is woven into the way we speak about afro hair. To underscore the racist usage of these terms, Dabiri presented a hypothetical. “I know Caucasian hair can be described as greasy, lank, or thin, but it is not routinely described thus,” she explains. “Can you imagine the horror if I casually referred to a white woman’s hair in this way, to her face!” Yet people are comfortable using these demeaning words to describe Black women’s hair.

Institutionalized microaggressions—like policies that stigmatize natural hairstyles in educational, military, and corporate settings—teach afro-textured women to be ashamed. These rules were handed down from slave plantations, where Black women were required to cover their hair to signify their subordination and undermine their cultural heritage. Afro-textured people: Go into your hair drawer and read the labels on your favorite products. Notice how hair companies employ microaggressive language to feed on what Dabiri calls "engineered insecurities." Black hair and Black bodies are not wild things that need to be tamed. Contrary to popular belief, afros are anything but hard and tough. 4C hair is the most delicate, fragile hair type. Our hair is only called a distraction because it naturally takes up space, and society teaches women to “shrink themselves, to make themselves smaller.” Despite how society silences Black women, our hair is a reminder that we deserve to be seen and valued.

Like a lot of little Black girls, I looked forward to special occasions because I could get my hair straightened. Finally, I could achieve the smooth, shiny, long hair I craved. Any heat damage that followed was totally worth it. Hair should be fun. Still, there’s something troubling about associating straight hair with formality and celebration. It’s yet another example of society’s inability to appreciate Blackness in its unaltered, raw form. I can’t tell you how many times I walked around with my ‘fro only for someone to tell me I needed to get my hair "done," or that it looked like a "birds nest."

Meanwhile, non-Black women have popularized "messy" and "undone" styles that aim to look like they just rolled out of bed. People with straighter styles aren’t required to drastically alter their hair for it to be considered "done" and we shouldn’t be held to a different standard. Afro hair is gorgeous in its shrunken and stretched states at every length. Let's abandon respectability politics that label kinky hair in its shrunken state low-class or common.

Type 4 women: Your hair is perfect the second it grows out of your scalp. As stated by Dabiri, any question you receive about length is tailored to whiter, straighter hair types. You, on the other hand, are blessed with dynamic hair that contracts and expands as you wish. Thanks to shrinkage, you have the most versatile hair type.

Do Not Give Up On Your Hair

Our hair didn’t give up on us, it’s as resilient as we are. Afro hair may be fragile, but it was strong enough to help our ancestors free themselves. Our hair can be used to make political statements. Rastafarians wore dreadlocks to reflect their religious beliefs. Sure, kinky hair takes forever to style, but sitting in barbershops and hair salons for hours made those spaces the cornerstone of our communities. It’s where generations of people shared wisdom, passed down our histories, discussed the issues that shaped their lives, and found solutions.

Our hair is high maintenance, but we are worth every penny. 4C hair requires us to slow down and care for ourselves, which Audre Lorde states is a form of “political warfare.” Especially in a country where Black women have traditionally been required to extend compassion to everyone but themselves. It’s time to normalize valuing Black women and their kinky, coily hair.