Give in to the siren's call. 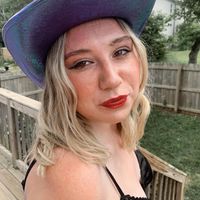 Mermaids have captured imaginations for thousands of years—in Greek mythology, sirens seduce sailors to a watery death with just their voices. While today's versions are thankfully less grim (hi, Ariel) they still retain the same mythical magic. Take, for instance, this September's Spring/Summer '23 shows: References to shiny scales, netting, and seashells were everywhere, officially ushering in our collective Mermaidcore era.

Aquatic-inspired details were all over the runways, from textures and textiles to sexy silhouettes. At the Interior show, fishnet dresses glided down the runway paired with ballet flats. For Proenza Schouler’s collection, see-through netting also appeared on fringed bustiers and skirt sets, along with camisoles tied at the straps with rope.

“It seems to stem from a longstanding interest in both animals and creatures as icons and symbols in fashion," says Rukiat Ashawe, Culture Specialist at the creative agency, The Digital Fairy. "For example, Hello Kitty and the rest of the Sanrio characters, Playboy with the bunny rabbit, or Mariah Carey, whose symbol is the butterfly. In the fashion sphere, fairies have been dominating for the past few years with the rise of fairycore and grunge fairycore.” Everything aquatic seems to be capturing imaginations as we begin to leave our Y2K obsession behind for a fascination with the mid-aughts.

Ashawe cites this major shift from fairies to mermaids due to the influence of Blumarine, an Italian label named for the founders' love for the blue water on the Italian coast. The brand's latest collection was "mermaid-themed, with models donning extra-long hair, fishtail maxi skirts, seashell bras, flare jeans with mesh material—all in distressed blues and sandy tones reminiscent of the depths of the ocean," says Ashawe, which was a major departure from the butterfly motif that dominated the labels recent collections. "Creative Director Nicola Brognano even cited 1989 The Little Mermaid as his inspiration but referred to his collection as an 'intriguing and sexier, less pop, dirtier' version.”

The trend isn't just influencing fashion—it's having a moment in beauty as well. "Wet-look" hair is once again popping up on the red carpet, and the eyeliner "siren eyes" trend has more than 764 million views on TikTok.

This dark, gritty sex appeal is a through-line of mermaidcore, separating it from the blingy, party-girl vibes of the Y2K era, and the more refined fairy and balletcore trends dominating fashion right now. Fashion content creator Charlie Hayes agrees. “I would define [the trend] as a hyper-feminine, aquatic style with a lot of these 'washed up' vibes. Oil-sleeked hair, netting details."

Ashawe points out that the mermaid also had a resurgence in the 2010s in the form of Tumblr's "seapunk" aesthetic, with long pastel dyed hair, and Black Milk leggings that featured iridescent mermaid scales dominating the platform. "The mermaid aesthetic that was popular on Tumblr was super bright and fun, almost cartoon-like, but this time around, it’s a lot more intimidating. Very dark feminine and mature," she adds.

As far as achieving the seductive look for yourself, Hayes recommends that people “go for a tan colored crochet cardigan with a little bralette underneath. Some shell or starfish motif accessories and wet-look hair." Or, tap into the trend's signature silhouette with a pair of flared pants or a long mermaid tail-shaped skirt. Forget the ancient mythology, everything you need to bring out your inner siren might already be hanging in your closet.